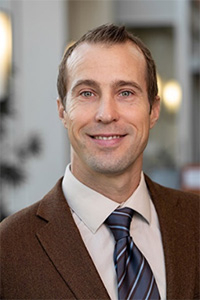 Professor Timo Budarz has a diverse background due to his insatiable curiosity about the world and life.  His formal training is in theoretical biological physics applied to studies on the link between dynamics and functions in proteins.  The complexity of such systems is something that challenges him and drives his curiosity.

Professor Budarz has authored three volumes of an engineering physics textbook covering classical mechanics, electricity and magnetism and modern physics.  His goal was to provide a mathematically-rigorous approach from the start with numerical methods applied where needed rather than the more typical approach of ignoring factors like air drag and non-linear terms that make the mathematics too difficult.  In the modern physics volume he unifies optics, wave studies and quantum mechanics in a phase-based approach, and discusses quantum mechanics and the nature of reality in the language of quantum field theory to give students the best descriptions of reality that current physics can offer.

Dr. Budarz has had a lifelong passion for vehicles of all types which led to a position as an engineering vehicle dynamics consultant for a world-leading race car manufacturer.  Later he worked as an automotive journalist, and road and track test driver for a publication with readership of over 750,000.

His curiosity about different computer coding languages led to a contract as a software developer for a defense contractor to connect wireless sensors to mobile devices for tracking, logging and broadcasting of environmental data.  In the coding realm, he has tinkered with microcontrollers and computer interfaces to write laboratory data acquisition and analysis software in the python language.

Professor Budarz enjoys and excels at bicycle racing.  He has earned multiple state titles in various cycling disciplines, a national title on the velodrome, and was a world championships medalist.  In addition to his faculty appointment, he is currently the Liberty University cycling coach and still races alongside his team.

“One thing that endlessly fascinates me is the fact that I exist… that we all exist.  Beyond that, the thought that the author of it all wants to have a relationship with me is humbling and perplexing.  I think of the words of King David: ‘When I behold your heavens, the works of your fingers, the moon and the stars, which you set in place – what is man that you are mindful of him, the son of man that you care for him?’  The sentiments of that thought resonate with me almost daily.”