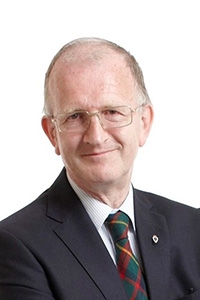 Professor Andrew C. McIntosh DSc, FIMA, C.Math, FInstE, CEng FInstP, MIGEM, FRAeS holds an emeritus chair in Thermodynamics and Combustion Theory in the Energy and Resources Research Institute at the University of Leeds, where he has lectured and researched in the field of Combustion and Explosions for over 30 years. His research has included investigations involving fluids (the interaction of pressure waves with flames) as well as solids. In the area of heterogeneous combustion he is interested in the safety of reactive substances, which can include traditional fuels such as coal, but also may include agrochemicals some of which are now being used widely to increase crop yields, but in bulk can have unusual ignition properties. Unusual chemical behavior is also being studied in collaboration with industry, with a view to developing carbon capture reactors for energy generation.

In the last few years, he has been involved in research in the area of biomimetics where the minute combustion chamber of the bombardier beetle has inspired a patented novel spray technology. This led to research first sponsored by the Engineering and Physical Sciences Research Council (EPSRC) followed by extensive funding from industry to apply the technology to fuel injectors, pharmaceutical sprays, aerosols and fire extinguishers. He is a trained mathematician and has worked in aerodynamics at Cranfield University and the Royal Aircraft Establishment (Bedford) before coming to Leeds where he gained a DSc in 1998 and a personal chair in 2000. He became a Fellow of the Institute of Physics in 2002 and in 2003 was elected a Fellow of the Royal Aeronautical Society. He has over 180 publications in Journals and Conferences and has lectured widely internationally on these subjects and on the scientific question of origins on which the discipline of thermodynamics has a fundamental bearing.