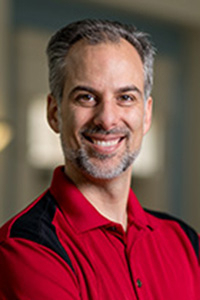 Ross received his B.S. in Earth Science from Pennsylvania State University, his M.S. in Paleontology from the South Dakota School of Mines and Technology and his Ph.D. in Geosciences from the University of Rhode Island. He is an Assistant Professor of Geology in the Biology/Chemistry Department at Liberty University, where he is also the Assistant Director of the Center for Creation Studies.

As a graduate student, Ross was a fellow of the Discovery Institute’s Center for Science and Culture. Ross, along with Fred Heeren (an old Earth creationist), attended the Kunming conference in China with grants from the Institute. The conference was notable for being secretly funded by the Discovery Institute in an attempt to gain scientific legitimacy for intelligent design.

In 2007, Ross was featured in a report on creationism. Ross “believes that the Bible is a literally true account of the creation of the universe and that the earth is at most 10,000 years old.” This is in contrast to his previous position as reflected when he earned his Ph.D. in geosciences from University of Rhode Island with a dissertation about “the abundance and spread of mosasaurs, marine reptiles that, as he wrote, vanished at the end of the Cretaceous era about 65 million years ago.” Ross has been criticized by some for taking this academic route, but Ross claims that it only firmed his belief in young earth creationism and has enabled him to find academic ground upon which to base the argument for his scientific credentials.

In 2011, Steven Newton’s cover story in Earth discussed Ross using minor appearances at academic conferences, where he uses standard science, as a way to bolster claims that creationists challenge mainstream geological consensus when they are not presenting young Earth creationism at the conferences. Newton wrote, that Ross said that “he thought in a ‘framework’ of standard science; but for a creationist audience, he said, he used a creationist framework.

Ross was a cast member in the 2017 documentary film Is Genesis History?, where he and the other cast members argued in favor of and presented evidence for a young Earth.