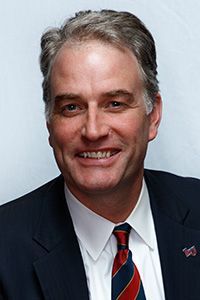 Robert Hurt served in the U.S. House of Representatives, representing Virginia’s Fifth District in Washington for three terms from 2011–2017. After stepping down from Congress in January 2017, Hurt came to Liberty University as Vice-President and founding Director of Liberty’s Center for Law & Government, where he has developed numerous programs that have provided students with exceptional opportunities to engage with influential leaders from the nation’s capital and across the country. These programs have included the production of a series of successful televised statewide political debates. In fall 2019, Hurt was asked to serve as Dean for the Helms School of Government.

Prior to representing Virginia’s Fifth District, Hurt worked as a lawyer and served as a citizen-legislator from Southside Virginia.  Hurt brings a wealth of practical legal, governing, and leadership experience, including three years in the Virginia Senate, six years in the Virginia House of Delegates, and a term in local government. During his 16 years in public office, Hurt demonstrated an abiding commitment to the Constitution and was always a strong voice for common-sense policy designed to make it easier for Virginia families, farmers, and small businesses to be free and successful.

Prior to his election to Congress, Hurt served as Chief Assistant Commonwealth’s Attorney for Pittsylvania County and then went on to build a successful private law practice in Southside Virginia.