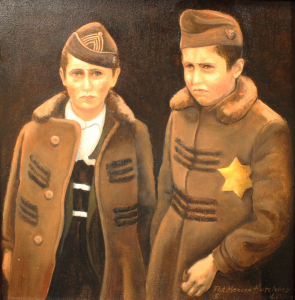 These two handsome young teenagers were the siblings of Lili Jacobs, a woman who survived Auschwitz. After the liberation of the camp, Lili was trying to find a warm coat when she found the Auschwitz Album, a small book of photographs taken by Nazi Guards, probably for record keeping. It is the only record found so far that details the entire perverted processing of Jews–from the time they arrived by cattle car at Auschwitz right up to when they were slaughtered. Lili found a picture of her two brothers in the small album.

They had been killed shortly after arriving because they were too young and were not considered “fit for work.” I was especially moved by the photo of these fine, smart, disciplined young boys, remembering the joy and pride we had when our own son went to the United States Military Academy at West Point.

There he had a very fine-looking uniform. Sril (Israel) and Zeleg were the cream of the crop, but were cut down without having a chance to live–all the preparing to serve their country and their people. It is hard to fathom the depths of the horrors of this vicious, shameless and cowardly crime. These soldiers were “killed in action” and should be recognized and rewarded posthumously in Hungary and in Israel with earned medals and full military honors.