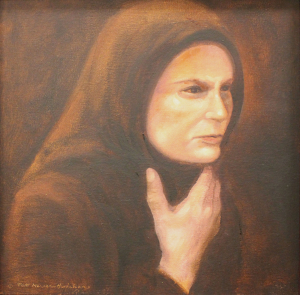 Many of these precious victims no doubt tried to be positive and keep on believing something good or someone
would eventually come and save them. Most could not even grasp the degree of The Evil confronting them and thereby continued to go forward. However, at some point on the long path to slaughter, all but the innocent babies and toddlers would have seen what was coming. There were those, however, who “knew” from the beginning, either by intuition or from rumors back in the ghetto of mass murders of Jews by the Nazis. Or just from being one who “knows.”

Whenever the time came for her, this woman now knows. She has no naïve thoughts left. She makes no effort at hope. She has pulled her black shawl over her head and now grasps it with a strong hand. She walks straight toward the storm. Perhaps she is already at the door of the fake “showers” and hears the screams of those being gassed. Perhaps she knows the smell of the burning flesh coming from the crematoria. Perhaps she passed the Fire Pits of ’44 and saw babies being tossed in alive, clothes and all. Whatever the reasons, the woman in black now knows.

The small Album photo did not give a clear picture of her hand, so I painted my strong Irish hand as her own, symbolically giving a sister in death the hand which I could not give her in life – thereby bonding our destinies.