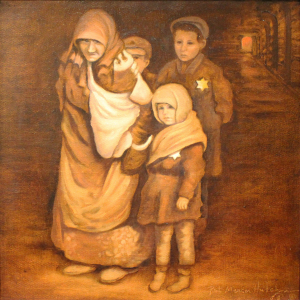 It is impossible to estimate the numbers killed in WWII by the Nazis. Commandant Rudolph Hoess at his trial said 2 ½ Million Jews were killed at Auschwitz and half a million died “naturally.” This number has been estimated differently, but the number of Jews who died in the entire war has been estimated at 6,000,000 and the number of Poles, mostly Catholic Christians 3,000,000. The estimate for the entire war is over 56,000,000. Gypsies, dissidents, religious and civil leaders who did not support Hitler were also killed. The crimes against Jews were unique – they were the only people in WWII marked for complete genocide, for “ethnic cleansing.” The Nazi goal was to erase their name from history.