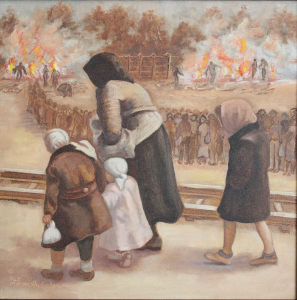 The numbers of Jews brought from Hungary to Auschwitz in 1944 were larger than usual. Adolf Eichmann, born into a middle class Lutheran family, had already investigated in 1935 the possibility of a “solution to the Jewish question.” Mastermind organizer of the Holocaust, he was given the task due to “reliability” (believe in & stick to the task) and organizational talents. He visited Auschwitz often, checking on “success” of the plan to deal with the “destructive intentions of the Jews.” When ovens were not sufficient to burn gassed prisoners, enormous pits were dug (by the “selected” to work), Jews were marched to the pits, undressed, shot (they fell into the pits), and then set on fire.