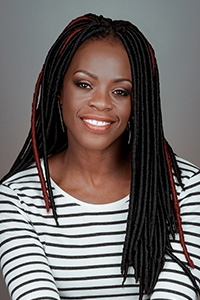 Professor Nirva Ready is a vocalist, artist, and worship leader. She hails from Chicago, Illinois to Haitian parents. She has a Bachelor of Arts in vocal performance from Fisk University in “Music City”—Nashville, TN.  While at Fisk, she was a member of the world renown Fisk Jubilee Singers. Professor Ready has recorded in the studio with many leading recording artists such as Faith Hill, Charlie Daniels, Ziggy Marley, Lyle Lovett, and Richard Marx.

Professor Ready toured with many leading Contemporary Christian Music artists such as Chris Tomlin, Matt Redman, Natalie Grant, Matt Maher, Mandisa, Brandon Heath, and others. She has a heart for the local church and has served as a worship leader in various churches. She and her husband, Seth, also served as the young adults pastors at The Crossing Church in Tampa, Florida. In her private time, she enjoys private voice coaching, mentoring, and discipling young adults.

For over a decade, Professor Ready was a backing vocalist in TobyMac’s Diverse City Band, appearing several times on the Dove Awards, Fox and Friends, and The View. She and her husband released their debut full-length album, “Never Alone” with Integrity Music in May of 2016. Their first single “Brother” was placed in regular rotation 40 Christian AC and CHR stations across the country. As a duo, they have appeared on TBN UK, CBN Canada and Fox News.