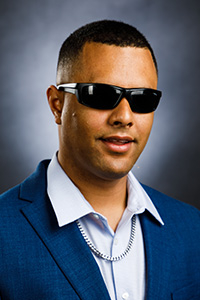 Mr. Nicholas Martinez, tenor, is a worship leader and recording artist who is passionate about music in many styles. In 2017, he received a B.A. in Biblical Studies and B.A. in Worship Studies from Northpoint Bible College. Completing the M.A. in Music and Worship with a concentration in Commercial Music Performance from Liberty University in 2019, he is continuing his studies at Liberty in the PhD in Christian Worship program.

During the summer of 2017, Professor Martinez recorded and released his first solo album entitled Confession which is a unique fourteen song album featuring his love for all genres of music – worship, metal, rock, pop, and others. In 2020, Professor Martinez released an EP entitled “Only One,” with three worship songs featuring his own orchestration and arrangements as well as his love and confidence in the Lord.

Mr. Martinez recently joined the membership of NATS (National Association of Teachers of Singing) and has placed first in the Adult Music Theater TBB category twice with Virginia NATS Student Auditions in 2019 and 2021. In 2017, he received “The Alice Chase Music” award for excellence in worship ministry.

As a performer, Mr. Martinez has been a featured artist in concerts and recitals in his home state of Massachusetts. He has also appeared in Liberty’s production of the Pirates of Penzance and sang as a chorus member with Lynchburg’s opera company, Opera on the James. As an advocate of opera and the arts for all audiences, and in particular, for the visually impaired, Professor Martinez has been advisor and consultant with the Boston based opera company Guerilla Opera. Because of his work with Guerilla Opera, other organizations have sought to learn what they can do to make music and the arts accessible to all audiences.

Mr. Martinez’s passion for worship leading and furthering God’s kingdom has led him to churches and events across the U.S. and Europe. He currently serves as the Praise and Worship Director of Freedom Word Church and is an Adjunct Professor of Music in the Liberty University School of Music.