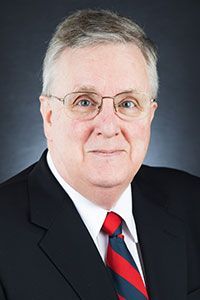 Dr. John Hugo is a busy singer, conductor, arranger, teacher, and adjudicator. His career has brought him in contact with the world’s finest conductors, including Shaw, Schuller, Ozawa, Davis, Abbado, and Dorati. Following studies with the legendary Lorna Cooke deVaron at New England Conservatory, he pursued doctoral studies with Douglas McEwen at Arizona State University. He attended the Phyllis Curtin Seminar for Singers at Tanglewood in 1980.

Dr. Hugo has directed the LU Concert Choir since 1988; this group has performed annually with the Roanoke Symphony Orchestra since 1997. He became Chorus Master of the RSO Chorus in 1999 and has prepared performances of major choral/orchestral works there ever since. He has also directed five musicals at LU: The Most Happy Fella, The Mikado, Brigadoon, H. M. S. Pinafore, and Anything Goes. He has performed solo roles with Opera Roanoke, the Lynchburg Fine Arts Center, and LU Theatre and has appeared as concert soloist with the Roanoke, Lynchburg, and LU Symphony Orchestras.