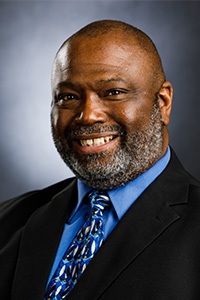 Mr. E. Daryl Duff is a retired Navy Chief Musician who served 23 years as soloist and vocalist with the United States Navy Band Sea Chanters Chorus. Stationed in Washington D.C. from 1990 to 2013, he provided musical support to four U.S. Presidents, the Department of the Navy, as well as senior ranking military and government officials. He was a featured soloist on seven U.S. Navy Band recordings and several U.S. Navy Band concerts televised by the Armed Forces Network.

He has performed at The White House, on Capitol Hill, in the Homes of the U.S. Vice President, Chief of Naval Operations, and the Chairman and Vice Chairman Joint Chiefs of Staff. Other notable performance venues include Carnegie Hall, the Kennedy Center, and Constitution Hall. His voice has taken him to England, Ukraine, and St. Thomas, U.S. Virgin Islands. He has sung the Star Spangled Banner at the following sports venues: The Nationals Stadium in Washington D.C.; Buffalo Bills Stadium, NY; Kansas City Royals Stadium, Kansas City, MO; Winston-Salem Dash, USTA Tournament Winston-Salem, NC; and Charlotte Knights, Charlotte, NC.

His online presence includes singing an a cappella version of “Amazing Grace” with Christian comedian Michael Jr’s “Break Time #5″/”Know Your Why” which has gotten over one million views since 2015. His most recent solo performances include playing the roles of Balthazar in “Amahl and the Night Visitors” and Thomas in the concert version of “Amazing Grace: The Broadway Musical.” Both productions were produced by the Liberty University School of Music. Additional feature performances include soloist and narrator with the Lynchburg Symphony and Virginia Christmas Spectacular at Thomas Road Baptist Church. He’s been a featured soloist with the National Symphony Orchestra, Kansas City Symphony, Cincinnati Pops, Greeley Philharmonic Orchestra, U.S. Army Band, and the Northern Virginia Chorale.

Mr. Duff is equally active as an educator and award-winning volunteer. He maintained a private vocal studio in Northern Virginia, has taught in the Lynchburg City School system, and at Oak Ridge Military Academy, the official State Military Academy of North Caroline in Oak Ridge, NC. The Department of the Navy has awarded him several medals including the Navy/Marine Corps Commendation Medal for ‘Sailor of the Year,’ honoring his years of work as a Navy Musician and volunteer in the local military and civilian communities as well as the U.S. Virgin Islands and the country of Ukraine.

Mr. Duff joined the Liberty University School of Music in the Fall of 2017. He resides in Lynchburg with Claudia, his wife of 33 years, and their daughter who is attending Liberty pursuing her master’s degree in education and School Counseling. Their two older sons and daughter-in-loves live in Spokane, WA and Kansas City, MO. They have a granddaughter, and grandson, and one grandson watching from Heaven.