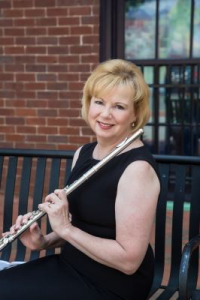 Alycia Hugo serves as Adjunct Assistant Professor of Flute at Liberty University in Lynchburg, VA, and holds the position of Principal Flute of both the Roanoke and Lynchburg Symphony Orchestras. Mrs. Hugo earned her Bachelor of Music and Master in Flute Performance degrees at New England Conservatory in Boston. Her teachers have included John Wummer (NYPO), the legendary James Pappoutsakis (BSO), piccolo specialist Lois Schaefer (BSO), and Marjorie Lockwood (Phoenix Symphony Orchestra). She is a four-time winner of the National Flute Association Convention Performers Professional Flutist Competition, achieving special recognition for her skills as a performer of twentieth-century music, and is a two-time winner of the NFA Professional Flute Choir Competition, performing at conventions throughout the United States. Mrs. Hugo performed with her husband, Dr. John Hugo, as a flute/tenor duo at the 2014 Chicago NFA conference, with guitarist, Dr. Sean Beavers, at the 2016 San Diego NFA conference, and as a finalist in the Alto Flute Artist Competition at the Salt Lake City 2019 conference.

Mrs. Hugo is a former principal flutist with the Rome (Italy) Festival Orchestra and the Wintergreen (VA) Festival Orchestra. In addition to Liberty University, she currently serves on the performance faculties of the University of Lynchburg, Randolph College, and Sweet Briar College.