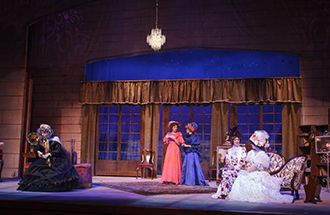 Tower Theater construction started in October 2009 and was finished in August 2010. The theater has 640 seats and over 12,000 square feet of backstage and support area.

The building that houses Tower Theater used to be an industrial space and was converted for the theater’s needs. By utilizing the existing space, the cost went down by about two-thirds.

Green Hall’s space for the Tower Theater was exactly 85 feet high, the minimum height needed to have a fly tower, necessary for Broadway-style productions.

Tower Theater employs a complex and professional rigging system and is one of several college theaters in America to have such a system.

The contemporary-style theater design was inspired by the Guthrie Theater in Minnesota as well as the existing industrial space. Linda Nell Cooper, Theatre Arts department head, feels that the Guthrie Theater is large yet intimate. She wished to have the same atmosphere inside Tower Theater, saying she wanted the space to “feel like it had its own personality.”

The Tower Theater architects won an award for the theater’s industrial design from the Virginia Chapter of the American Society of Interior Designers. The first-place award was in the Contract Institutional design category.

The space is also utilized for other aspects of student life, such as showing widescreen movies.

Hairspray was the first show performed in the theater. Liberty University is the first college in Virginia to gain permission to perform the Broadway hit.