Economic impact of university on community is wide-reaching 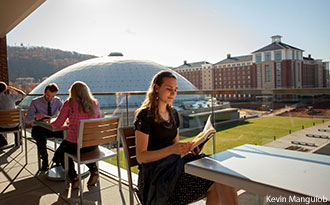 As its more than 7,000-acre campus continues to thrive, Liberty University’s economic value to the greater Lynchburg area has increased exponentially, according to a recent study commissioned by the university through Mangum Economic Consulting LLC, based in Richmond, Va.

The impact of the university, founded in 1971, is felt throughout the Lynchburg Metropolitan Statistical Area (MSA) — also known as Region 2000 — including the surrounding counties of Amherst, Bedford, Campbell, and Appomattox, which has a total estimated population of nearly 250,000 according to a 2009 census.

The study concluded that “Liberty University is a rapidly growing institution that has a significant economic and fiscal impact on the Lynchburg MSA and the state of Virginia as a whole, and plays a very active and positive leadership role within its community and the state.”

Liberty’s contribution is wide-reaching, from creating jobs and generating local tax revenue to nurturing community involvement by opening its recreational venues to the public. It also encourages students, faculty, and staff to volunteer hundreds of thousands of hours at charitable organizations each year.

Already Lynchburg’s largest employer, Liberty is also one of the city’s fastest-growing. Between 2001 and 2013, university employment increased by 6,096 jobs, or 412 percent.

According to Mangum’s analysis, Liberty’s annual financial impact on the city has increased by more than 260 percent in the past four years.

Two years ago, a study by the same consulting firm put Liberty’s annual local expenditures for 2011 at $342 million, about $225 million less than the university spent in the fiscal year 2013-14. In 2009, the total investment into the community was $217 million, $350.3 million less than this past year.

In the fiscal year 2013-14, direct spending in the Lynchburg MSA by the university, its associated enterprises, tenants, students, and visitors totaled $567.3 million. This direct regional spending had a ripple effect of more than $1 billion in economic activity within the broader regional economy over the past year. It was also responsible for supporting a total of 10,637 jobs and generating $387.7 million in labor income.

Additionally, through the university’s Center for Christian/Community Service (CSER) and the Community Care Initiative programs, Liberty’s students provided 667,415 hours of volunteer service over the past year. Combined with employee volunteer efforts, the service hours were worth approximately $5.87 million to underprivileged residents and charitable organizations throughout the Lynchburg MSA.

As with any educational institution, the greatest influence the university has is in contributing to the state’s human capital by producing well educated and highly trained graduates. The Richmond study estimated the economic value of the enhanced labor productivity of Liberty’s 2013 graduates added $50.3 million to Virginia’s workforce and that over time, those graduates will generate $874.2 million in economic benefits throughout their careers.

Liberty is playing a revolutionary role in changing the model for higher education throughout the country. It has continued to expand its program offerings and invest in its infrastructure through its ongoing $500 million campus rebuilding, which has provided tremendous growth in architectural and construction jobs, while also creating positions to staff the new facilities.

Since 2005, the university has added its own law school, a cinematic arts school, an engineering school, the LaHaye Ice Center and Liberty Mountain Snowflex Centre, which are open to the public, and the Hancock Welcome Center. Construction is nearing completion on the new School of Music and Science Hall, which will house the Department of Biology & Chemistry as well as the Department of Health Professions. Liberty has also renovated its football and soccer/track & field stadiums and built new baseball and softball stadiums as well as a lacrosse and field hockey complex, providing top-quality NCAA Division I athletic events for the community to support and enjoy.

In January, Liberty unveiled the state-of-the-art Jerry Falwell Library, a 170,000-square-foot building named in honor of the school’s founder, Jerry Falwell Sr., that features a robotic book retrieval system inside the library’s four-story tower. This fall, Liberty opened its renovated 230,550-square-foot LaHaye Student Union, with an expanded Recreation & Fitness Center, and its $40 million Center for Medical and Health Sciences, located on the south end of Liberty Mountain overlooking the main campus. The four-story structure houses the university’s new College of Osteopathic Medicine, the second of its kind in Virginia, and select programs from its School of Health Sciences. Also, the first high-rise Residential Commons was completed, housing more than 1,200 students this semester. Similar dorms are planned for the near future.