Liberty breaks ground on Center for Music & the Worship Arts 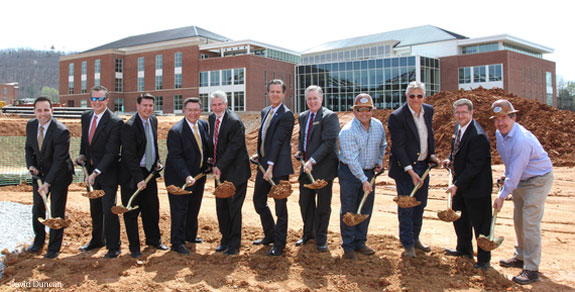 With the sun shining bright overhead, members of Liberty University’s administration joined faculty, staff, and students of the School of Music to celebrate the groundbreaking of the new Center for Music & the Worship Arts on Friday, April 11.

The site is located on Liberty’s main academic corridor, near the new Jerry Falwell Library and the Science Hall, currently under construction.

The 144,000-square-foot, state-of-the-art structure is part of Liberty's $500 million campus rebuilding phase. The building will feature a 1,600-seat fine arts auditorium; 50 practice rooms; 40 teaching studios and piano, songwriting, and music computer labs; as well as two student recital halls/classrooms. The educational wing of the building is scheduled to be completed by Fall 2015 and the auditorium is scheduled to open later that semester.

Dr. Vernon Whaley, dean of the School of Music, led the crowd in an opening prayer. Dr. Ron Hawkins, vice president for Academic Affairs and vice provost, spoke about the history of forming the School of Music, which became the seventh largest school of music in the country when the Center for Worship and the Music and Humanities department merged in 2012.

“We began to look at building the finest music and worship program in the world,” Hawkins said. “We have brought in a faculty that is second-to-none. They have a skillset and a heart and a passion for music and the culture.”

President Jerry Falwell addressed the crowd, crediting the staff with their hard work to complete the plans for a world-class facility that will greatly enhance the school’s offerings.

Whaley then spoke briefly about the future of the school, noting that the new building will serve as a training facility for students as they seek to “embrace and engage this culture and to reclaim it, to redeem it, and to restore it for the Kingdom of God.”

He said that as students are being equipped to do this, they will celebrate God’s greatness, goodness, and glory.

Dr. Ben Gutierrez, administrative dean for undergraduate programs, closed the ceremony in prayer, asking God to bless the School of Music as its students and faculty proclaim His message of love and salvation. 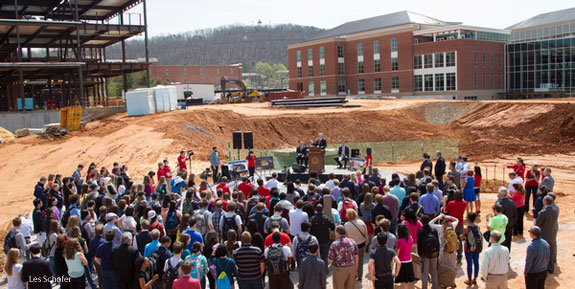