For the third consecutive year, Liberty University junior and NASCAR Cup Series driver William Byron will drive in memory of a fallen U.S. military service member who has ties to Liberty during the 600 Miles of Remembrance, NASCAR’s longest race, held over Memorial Day Weekend on Sunday, May 24.

Liberty will serve as the primary sponsor for the race, held at Byron’s home track, Charlotte (N.C.) Motor Speedway. Due to COVID-19 restrictions, the race will not have spectators, but will be broadcast live at 6 p.m. (EST) Sunday on FOX.

Billings, of Clarksville, Va., died at age 30 on Oct. 13, 2012, in Afghanistan from wounds suffered when enemy forces attacked his unit with an improvised explosive device.

Like Byron, Billings was a student in Liberty University’s online programs. He began his studies in 2010 in pursuit of a B.S. in Criminal Justice and — after serving in Iraq that same year and being deployed for a second tour of duty to Afghanistan in 2011 — was only a month from returning home at the time of his death.

“I’m honored to be able to have Sgt. Robert Billings’ name on our car in Charlotte,” Byron said. “Sgt. Billings made the ultimate sacrifice for us, and this is just one small way that we can show our appreciation to not only him but his family as well.”

Billings’ wife, Christy, who is raising their four children, Isaiah (17), Kayle (15), Elijah (13), and Naomi (10) in Virginia Beach, Va., expressed her thankfulness to Liberty and Byron for remembering him in such an exciting way.

“We love our Liberty family and especially appreciate your commitment to this nation’s veterans, both present and with the Lord,” she said.

Rogers received the Purple Heart and Prisoner of War medals for his service in World War II. He was one of 75,000 American and Philippine troops captured by Japanese forces while serving in the Philippines and was among the survivors of the Bataan Death March. He later spent more than 25 years as an administrator at Liberty, including working as chief financial officer, before retiring in 1999.

Liberty has developed a community of more than 20,000 service members, veterans, and military spouses who study through its online degree programs while based throughout the United States and around the world. The university was ranked second among Best for Vets: Colleges 2020 for online and nontraditional schools and designated a Top 10 Military Friendly School on the 2019-20 list of “Better for Veterans” institutions. In July 2017, Liberty became the first Purple Heart University in Virginia.

Byron, a junior business administration — communications major who started as a residential freshman in Fall 2016 before continuing his degree online, is thankful for Liberty’s continued support and feels privileged to play a part in continuing to honor the service of U.S. military personnel with Liberty ties.

In his first 600 Miles of Remembrance race as a Cup Series rookie in 2018, Byron drove in memory of two former Liberty faculty members — U.S. Army Maj. Mike Donahue and retired Air Force Lt. Col. Charlie Davidson. Last May, he drove in tribute to U.S. Air Force Captain and Liberty online student Mark Weber, who died in a helicopter crash in Iraq in March 2018.

“Even with everything currently going on in the world, I’m glad that we get the chance to honor (Sgt. Billings) at my home track,” Byron said. “It’s a special place for me to race in general, but with both Sgt. Billings and myself being Liberty University students, the connection is just that much greater.”

Since the NASCAR Cup Series has been on a short hiatus with the ongoing pandemic, Byron has experienced tremendous success in the eNASCAR iRacing Pro Invitational Series, winning three races. He captured his first checkered flag of the series on April 5 at the virtual Bristol Motor Speedway and repeated as champion on April 19 at the virtual Richmond (Va.) Raceway and again on May 3 at the virtual Dover (Del.) International Speedway.

On-track racing will return with two Cup Series events at Darlington (S.C.) International Raceway this Sunday at 3:30 p.m. (EST) and  the following Wednesday at 7:30 p.m. (EST) Similar to Charlotte, there will be no spectators at either race.

“While I wish the Billings family was able to be with us in person at the track, I hope we still are able to make them proud with a solid run in the No. 24 Liberty University Chevy and hopefully end the night with a win in such a historic race,” Byron said. 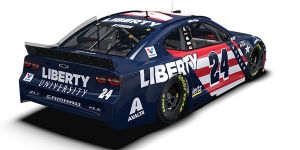