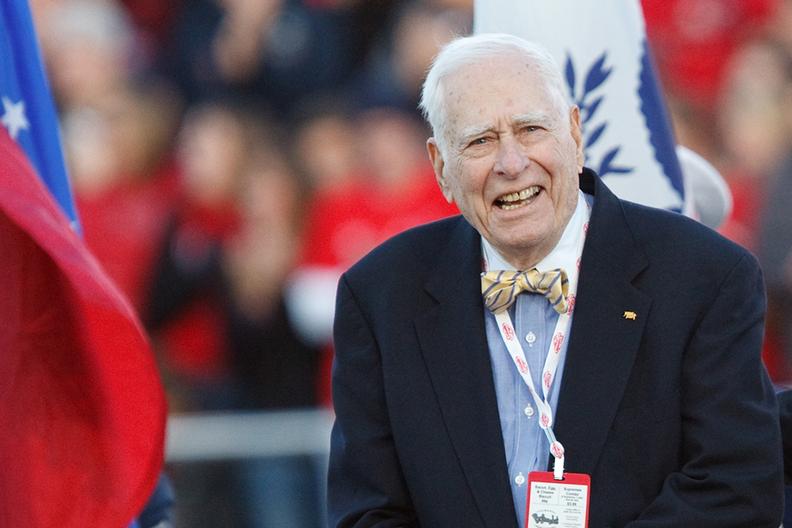 Rogers received the Purple Heart and Prisoner of War medals for his service in World War II. He was one of 75,000 American and Philippine troops captured by Japanese forces while serving in the Philippines. He was among the survivors of the Bataan Death March, where soldiers were forced to march approximately 75 miles in five days before being sent to POW camps, where the majority of the 10,000 prisoners died as the result of abuse, disease, and malnutrition. Rogers said he survived due in large part to his strong faith in God. After his three-and-a-half-year imprisonment, Rogers, at 6-foot 3-inches tall, weighed just 85 pounds. He was told that he would likely die by age 45 and never be able to have children. He and his wife, Barbara, had five children and dozens of grandchildren and great-grandchildren.

President Falwell said his family and the Rogers family were close friends. Rogers was a mentor to him when he started as Liberty’s general counsel. He said Rogers’ financial wisdom and frugality helped navigate Liberty through some of its most trying economic times.

“Our offices were a few feet apart,” Falwell recalled, “and we really hit it off because he was extremely conservative financially and was known as ‘Mr. No.’ He said no to expenditures, whereas my dad was more of a risk-taker. I was more on George’s side because I was young and I was really concerned about the long-term future of Liberty. We got along really well for that reason, and for years after that, even after he left, he was very complimentary of me and my financial conservatism because I backed him up and I was always pushing for expense cuts like he was. 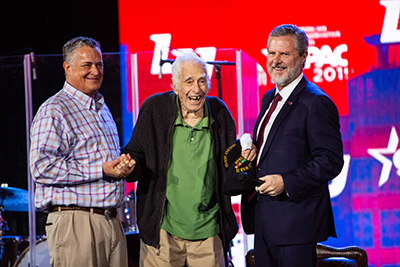 “He was like an iron fist,” Falwell added. “I don’t think Liberty would be nearly as successful financially if it had not been for George Rogers. When it was hard for my dad to say no, because he was a pastor, George Rogers was the tough financial guy we needed to survive all those difficult years. He was a good friend, and he’ll be greatly missed.”

Rogers retired in 1999, but he remained a loyal supporter of the university. President Falwell invited him to return as a special guest at many Liberty events. Rogers received a thunderous standing ovation at a Veterans Day Convocation in 2015 at the Vines Center and was presented an honorary Doctor of Business at Commencement 2016. President Donald Trump saluted Rogers at Liberty’s Commencement on May 12, 2017. Most recently, Rogers was an honored guest on Liberty’s stage during a military-themed portion of the Conservative Political Action Conference (CPAC) this past March.

“Even at close to 100 years old, he insisted on not only coming on the stage, but standing up and speaking,” Falwell said. “I’m so grateful that he had one more chance to do that.” 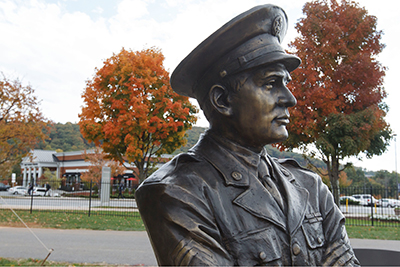 In 2010, Liberty established an annual award in Rogers’ honor — the George Rogers Champion of Freedom Award — presented to a U.S. Armed Forces veteran who went beyond the call of duty in demonstrating extraordinary heroism while in the service and continued to be an outstanding ambassador in their community. The winner is recognized during the annual Military Appreciation Day football game, a highlight of the university’s Military Emphasis Week. A bust of Rogers is on display outside the main entrance to Williams Stadium, along with the names of award winners.

Rogers and his wife were longtime members of Thomas Road Baptist Church. Senior Pastor Jonathan Falwell will officiate the memorial service on Saturday at 1 p.m. at Pate Chapel, located next to TRBC’s main sanctuary.