Calls for help echoed across the runway at the Lynchburg Regional Airport on Thursday as Liberty University students from the School of Aeronautics and the School of Nursing rushed to the scene of a simulated plane crash.

The drill was aimed at giving students real-world experience. This is the second year the two schools have participated.

In the scenario, which was part of the Aviation 409: Safety Management Systems class as well as the Community Health and Crisis Nursing classes, a small prop plane crashed into a crowd of people attending an airshow. Students played the roles of airport representatives, first responders, Red Cross representatives, and victims. 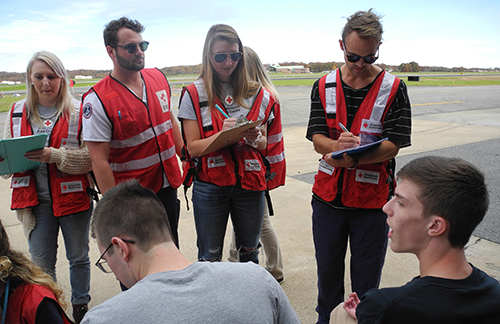 “It’s a really good experience for our students,” said Andrew Walton, Liberty Aeronautics’ director of safety. “It’s a way for them to take what they learned in the classroom and apply it to a real-life situation.”

Walton said it’s also a chance for students to adapt to changes in a fluid situation like a crash.

“Adapting is always part of the drill,” he said. “Sometimes things don’t go according to plan, but that’s why it’s important for our students to be prepared to respond in a dynamic environment and be prepared if something goes wrong.”

Nursing students tended to the 12 crash victims, while aviation students worked to secure the scene and investigate the incident. The so-called victims used stage makeup to create lifelike injuries.

“It’s a real-life experience in a controlled environment,” said Dr. Dana Woody, associate professor of nursing. “It’s a defining moment where students get to see where they’re retaining the information because this is what they’re going to have to do as professionals.”

Senior Lauren Esakson, who is studying exercise science and is a member of Liberty’s Red Cross Club, was on hand to see how the Red Cross would respond to a similar incident. 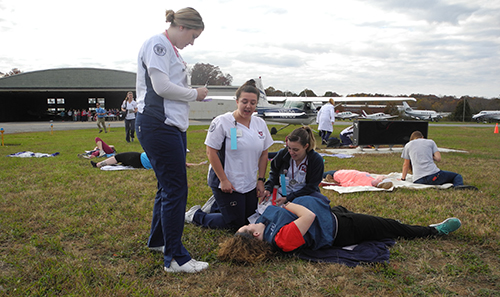 “It’s not real, but it feels real,” she said. “I’m glad that Liberty has the resources like this to put a drill together where we can gain experience.”

Senior Judyth Kindrick, who is studying aviation management, was the communications director in charge of relaying information to the media about the crash.

“It’s so different learning basic skills in the classroom and then applying them in the field like this,” she said. “It’s helpful because I think, ‘OK, I could have done this better’ or ‘I shouldn’t have said it this way.’”

Collaborating with students from other disciplines is a great way to learn, Kindrick said.

“We’re two very different schools and majors, but this is a situation we both can learn from,” she said. “Within our major we have a lot of opportunity to do hands-on things like the drill. It makes things more interesting, but it definitely prepares us better for our career.”