For an hour on Thursday evening, Liberty University’s campus served as a megaphone for the nation’s hot-button issues as the three candidates running in the Republican primary to challenge incumbent Democrat Tim Kaine for the U.S. Senate debated on live television. 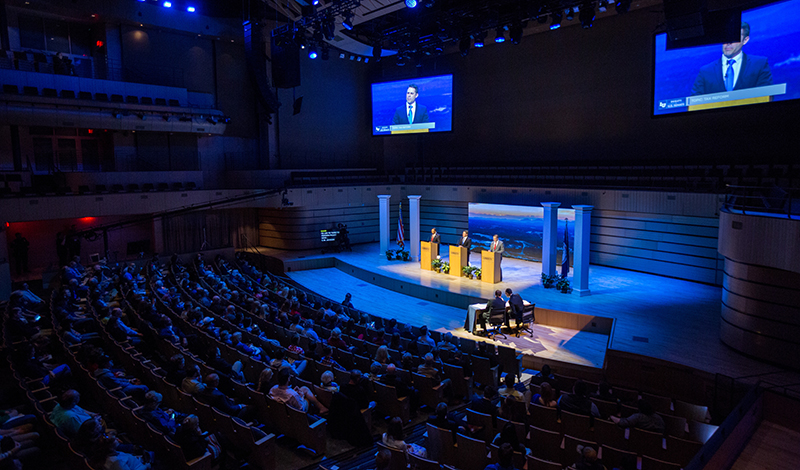 The debate was held in the Center for Music and the Worship Arts Concert Hall and was presented by Liberty’s Center for Law & Government, operating in conjunction with the Helms School of Government and Liberty University School of Law. The Center for Law & Government seeks to engage students in the free exchange of ideas and the robust debate of issues of national and state importance. Liberty seeks to host debates for all political parties, as well as general election debates, both as a public service and as a way to immerse students in critical thinking about key issues.

“In order for us to have self-government, people have to know who the candidates are and what the issues are,” explained Robert Hurt, the center’s executive director. “What we heard tonight was a serious debate with two great moderators who made sure you heard about the issues. It is great for students to be able to have that firsthand exposure to often heated discussion about issues that are so important. We recognize that our future is only as bright as our young people who are trained in places like Liberty and are willing to go out and make a difference in the world, whether in politics, or business, or law, or medicine, or community work.”

The broadcast, produced by Liberty’s Broadcast Communications Department in partnership with Sinclair Broadcasting, was aired live across the Commonwealth and on Facebook. A number of university departments and schools worked in support of the event, and several students served as volunteers. 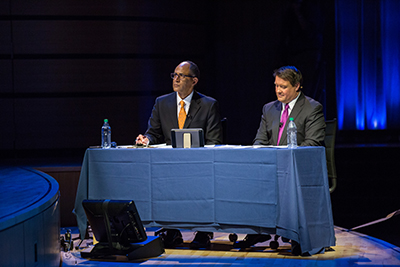 Sophomore Opal Lowther said that she appreciated the formal setting where students and community members could think critically about politics.

“I’m tired of Liberty being called a bubble; I don’t think it is,” she said. “I think it is a stronghold, perhaps, for certain values. But I find it to be enriched by these events, because students are exposed to different things and they have something very important to talk about amongst themselves.”

Senior Trent Craven added that the event was “a good way to draw attention to the issues.”

“Events like this should be offered more regularly,” he said. “I think it could potentially promote community involvement within (politics). And I think everyone has a civic duty to let their voice be heard. I think everybody should discuss these issues because they are not only the future of the Commonwealth, they are the future of this country.”