Alluvion brings to life a tale as old as time

May 3, 2016 : By Melissa Skinner - Office of Communications & Public Engagement 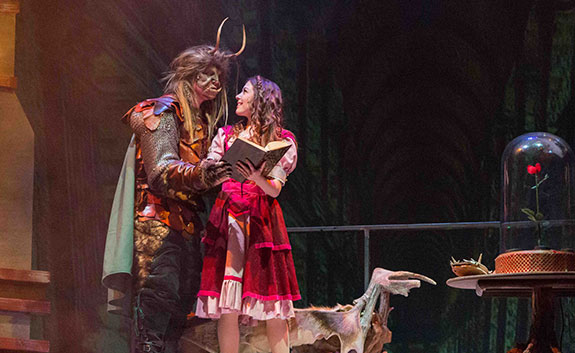 Alluvion Stage Company, Liberty University’s professional theater company, brought Disney’s classical tale “Beauty and the Beast” to the Tower Theater stage on Friday night. The musical runs through May 15 with 16 performances, all of which have sold out.

Set in France, circa 1400, “Beauty and the Beast” tells the story of Belle, an independent young woman who does not fit into her small town, and the Beast, who, beneath his ferocious appearance, is really a young prince trapped under a spell. To break the spell, the Beast must overcome his ornery temperament and learn to love and be loved in return. With the help of the Beast’s enchanted servants, the spell is broken.

Linda Nell Cooper, director of the show, said audiences will enjoy the familiarity of the Disney characters, including the matriarchal teapot Mrs. Potts and her adorable teacup son Chip; Cogsworth, the overbearing clock and his candlestick companion Lumière; as well as the pompous, fan-favorite Gaston and his buffoon sidekick LeFou.

“We hope that audiences come and enjoy what we have worked to bring to life,” she said. “It is a moment for a community to come together and partake in one storyline of truth, one storyline of love, and one storyline of wonderment that will hopefully then inspire people in their own lives.”

Cooper noted that “Beauty and the Beast” is a family-friendly, magical story that people have been in love with for 25 years.

“Whether someone fell in love with it as a child or through looking at it with children and grandchildren, we are all captured by Belle’s ability to see past the external and see into the heart of another person,” she said. “Belle sees goodness, kindness, and the person someone was meant to be. Every one of us hopes that those around us can see into our hearts and recognize the person we were meant to be — the person that sometimes gets hidden away because of other things in life.”

Rachel Webb, a costume designer on set, said her favorite piece to design for the show was Belle’s gold dress.

“I definitely wanted to keep in mind the classic and iconic elements of the dress and take into consideration what people would want to see, but I also wanted to bring a different perspective to the design,” she said. “I wanted it to fit within the world, but still feel really magical, not just historically inspired by our time period.”

During the run of “Beauty and the Beast,” Alluvion is honoring Belle’s love for books by holding a book drive for the Boys & Girls Club of Greater Lynchburg. Anybody who dropped off a new or gently used children’s book at the Vines Center Ticket Office or the Tower Theater Box Office received $3 off their ticket to see the show.