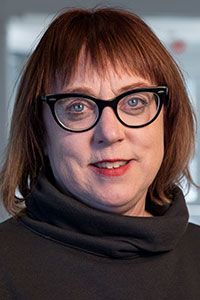 Karen Swallow Prior, Professor of English, earned her Ph.D. and M.A. at the State University of New York at Buffalo and her B.A. at Daemen College.

Her scholarly work has appeared in 1650-1850: Ideas, Aesthetics, and Inquiries in the Early Modern Era; The Shandean; The Scriblerian and various literary encyclopedias.

Prior received the Chancellor’s Award for Teaching Excellence in 2013, was named Faculty of the Year by the Multicultural Enrichment Center in 2010, received the Sigma Tau Delta (LU chapter) Teacher of the Year Award, and was the 2003 recipient of the President’s Award for Teaching Excellence.  She is a member of the graduate faculty and teaches British literature primarily, with a specialty in eighteenth-century British literature, which she loves for its emphasis on philosophy, ethics, aesthetics, community, and the “middle way.”

Her books include Fierce Convictions: The Extraordinary Life of Hannah More – Poet, Reformer, Abolitionist (Thomas Nelson 2014) and a literary and spiritual memoir, Booked: Literature in the Soul of Me (T. S. Poetry Press 2012). Her writing has appeared at Christianity Today, The Washington Post, The Atlantic, The Gospel Coalition, Break Point, Think Christian, Comment, Relevant, and Books and Culture. She has spoken at numerous writing conferences including the Festival of Faith and Writing and the Roanoke Regional Writers Conference.

Prior is a Research Fellow with the Ethics and Religious Liberty Commission of the Southern Baptist Convention, a Senior Fellow with Liberty University’s Center for Apologetics and Cultural Engagement, and a member of the Faith Advisory Council of the Humane Society of the United States.