Through the smiles and tears of joy shared across a crowd of more than 40,000 on hand for Liberty University’s 46th Commencement Ceremony on Saturday was a sturdy resolve, a sense that while it was the end of a journey, the 20,731 graduates making up the Class of 2019 had much to look forward to.

Pence brought with him the personal congratulations of the President of the United States of America, Donald J. Trump (who gave the first Commencement address of his presidency at Liberty) and encouraged the largest graduating class in Liberty’s history to seize “a new era of opportunity and optimism” fueled by a growing American economy.

He thanked the more than 6,000 graduates with military ties for their service to our nation and celebrated the numerous accomplishments of the Class of 2019, which includes more than half a million hours of community service. From ages 17 to 87, many of whom earned their degree through Liberty’s online programs, Liberty’s Class of 2019 includes nearly 9,500 who were awarded bachelor’s degrees, more than 8,300 with master’s degrees, 50 juris doctorates, 151 osteopathic medicine degrees, and 638 doctoral degree recipients. Nearly 6,000 graduated with honors, including 1,534 with a perfect 4.0 GPA.

The Class of 2019 has an advantage entering the job market, Pence explained, noting “the Liberty name carries great weight with employers all across the country” (including his own staff, which includes four LU alumni), but he also warned the graduates to be prepared to make a stand.

“If what you’ve seen and heard and learned in this place has also taken hold in your hearts, go from here, live it, and share it — because America needs men and women of integrity and faith now more than ever.”

The vice president reminded the crowd of attacks on faith communities across the world, from harsh media assaults against religious education to horrific acts of terror at places of worship.

“You need to prepare your minds for action, men and women. You need to show that we can love God and love our neighbor at the same time through words and deeds,” Pence said. “And you need to be prepared to meet opposition. As the founder of this university (the late Dr. Jerry Falwell) often said, ‘No one ever achieved greatness without experiencing opposition.’”

He challenged the graduates to “go forth for Liberty” and make their alma mater proud as their loved ones cheer them on.

Pence, joined by his wife, Karen, was welcomed to the stage inside Williams Stadium by Liberty President Jerry Falwell, who called him “one of the most engaged and influential vice presidents in my lifetime.”

“While he has dedicated much of his life to public service, he serves our country with high distinction, dignity, and honor, defending America’s freedoms and principles, often under the unrelenting scrutiny of a hostile press,” Falwell said.

Falwell pointed out the vice president’s accomplishments as Indiana’s governor and a U.S. Congressman, prior to his White House tenure, bringing “several key reforms to Indiana to help promote the dignity of human life, economic freedom, and all the necessary conditions for the common good.”

As he addressed the graduates, President Falwell encouraged them to step forth into their careers as leaders and innovators.

“What we really want to do is to teach students how to think like entrepreneurs,” Falwell said. “Not just to go out and get a job and wait for the end of the week for their paycheck, but to really look for ways to add value, to pursue ideas and problem-solve, and also not to be afraid to fail and try again, because that’s how this school started from scratch in 1971 and became the world-class university you see today.”

Liberty’s president shared an example in Anthony Nobles, a medical innovator and executive director of Liberty’s Center for Entrepreneurship and his own father, Liberty’s founder Dr. Jerry Falwell.

“God built that entrepreneurial DNA into my father, who learned it from his father and his grandfather, and then dad mentored many of us with that same spirit,” Falwell said. “Graduates, I hope that your time at Liberty has also placed that spirit, including a real love for people, in all of you. Liberty was built by entrepreneurs who took huge risks, and if you do that in your life and are not afraid of failing, you’ll be shocked at what you can accomplish.”

Nobles spoke briefly about building his products from a vision, before his friend, Dr. Ben Carson, took the stage to encourage students to have courage to rise above conformity.

Falwell called the 2018-19 academic year one of the university’s most successful to date. He highlighted accomplishments in Flames athletics, including its first victory in the NCAA Tournament, the highest bar exam passage rate in Liberty Law history (7th in the nation, alongside Ivy League schools), and Liberty University College of Osteopathic Medicine exceeding the national match rate for the second year in a row.

During his address, Falwell also introduced his family, including his wife, Becki, and their granddaughters — Virginia Rose, born last year, and Reagan Elise, born in February. He also congratulated his niece, Jessica Falwell, and nephew, Paul Savas, for graduating.

The traditional graduate charge was given by President Emeritus A. Pierre Guillerman.

Graduate Andrew Harris, who received his bachelor’s in commercial music, said that hearing from the vice president on graduation day is “a pretty big thing to have happen, especially at your Commencement. I’ve seen quite a few people speak (at Liberty), and this is quite awesome.” 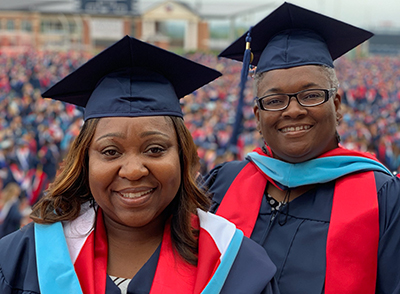 “To see this huge, beautiful campus for the first time, it’s immaculate; a wonderful experience,” Cranford-Bess said. “I’m glad she (Anderson-Jordan) encouraged me to sign up with her to start Liberty; it’s been awesome.”

As a wife, mother, and grandmother with a career, Anderson-Jordan’s degree did not come easy. But she shares the same story as many of Liberty’s graduates who used the flexibility and affordability of Liberty’s online program to advance their career.

“I had to fight through adversity to be here,” she said. “But, I wouldn’t have it any other way. It’s a significant accomplishment — words are inadequate to describe how I feel.”

For Rietje Lulsdorf, Commencement was a family reunion, as her grandparents traveled from Germany to see her turn the tassel. Lulsdorf earned an M.S. in Industrial and Organizational Psychology. She said the sadness of leaving her friends gives way to excitement for the next step: “You had so many great memories but at the same time you are ready for the future.” 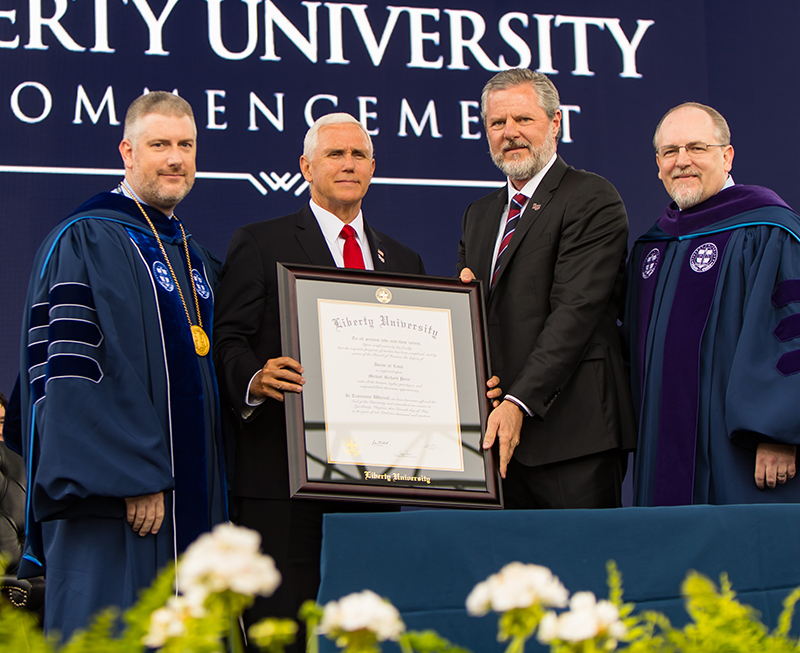 Pence, who previously served as the 50th governor of his home state of Indiana and four terms as one of the most conservative members in the House of Representatives, was recognized for his service and devotion, nobility of character, deep-abiding faith and conviction, and resilience in leadership. 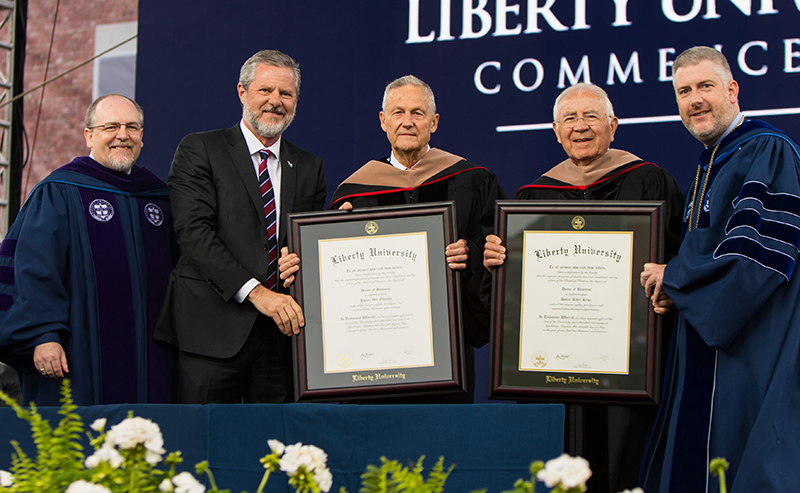 President Falwell also conferred honorary Doctor of Business degrees to local Christian businessmen Daniel Reber and Jimmy Thomas, former owners of RST Marketing in nearby Forest, Va. Reber and Thomas caught the vision for Liberty and stepped up to support the university when funds had run out, donating the $1.4 million needed to complete the Reber-Thomas Dining Hall in 1992 and continuing to give generously to Liberty projects.

“Without their intervention, the school would likely not have survived,” Falwell said. “They have remained faithful supporters ever since, playing a key role in helping us fulfill the vision of becoming a world-class university.” 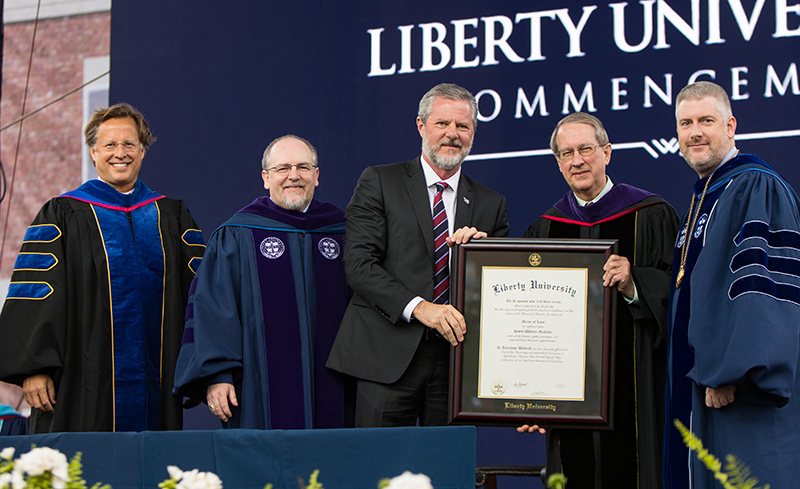 Goodlatte stepped down in January after completing his 13th term in Congress and building a reputation for passing laws that advanced fiscal conservatism, personal liberty, economic growth, and limited government. Goodlatte plans to house his library, correspondence, and official papers from his 26 years in Congress at Liberty for future generations of students to access.

His wife, Maryellen, played a key role in helping Liberty navigate the financial struggles of the early 1990s as one of the university’s lead outside attorneys.