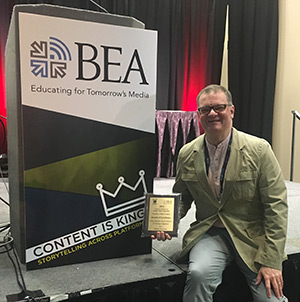 Dr. Carey Martin, a Liberty University professor in the School of Communication & Creative Arts, was recently given the Award of Excellence from the Broadcast Education Association (BEA) at the annual Festival of Media Arts, held in Las Vegas April 17-20.

The BEA is one of the oldest and largest associations of academics in media. The national, peer-reviewed festival attracted more than 1,500 entries across 18 categories this year.

Martin won the award for his short film, “Ohfer.” The film is named after the baseball term relating to batting statistics. The plot focuses on a young boy named Craig who dreams of following in the footsteps of his athletic sister Dawn.

Mirari Pictures, a film company created by Liberty alumni, helped Martin produce the project, which Martin wrote and directed. In total, 20 Liberty students and alumni from the Departments of Theatre Arts, Digital Media & Communication Arts, and Studio & Digital Arts worked on the film.

“My former students saw my piece as an opportunity to expand their offerings beyond evangelical work into the simply family-friendly realm,” Martin said. “I must say that working with them was the most enjoyable experience of my professional career.”

Martin added that it was meaningful to receive the award from a board of his own peers.

“To have our independent picture recognized was a total charge,” he said. “When the professors and professionals, who make up our blind-peer-review judges, decide your work deserves an award, it really is a great honor.”

Martin plans to enter “Ohfer” in some film festivals in the next few weeks.

Martin has taught at Liberty since 2007. He has received numerous awards for both teaching and his professional media projects, including admittance to the Who’s Who in America in 2009, the Most Inspiring Instructor of Communications at East Carolina University, the Outstanding Instruction in Student Filmmaking award from the Blue Moon Film Festival in 2007, First Place in Screenwriting from the Alamo Film Competition for Florida Students in 1992, the Best of Festival King Foundation Award for faculty scriptwriting presented by the BEA, and the Best of Competition award in short films also presented by the BEA.