Despite the rain, the stands at Williams Stadium were filled with cheering fans as Liberty University showed its appreciation for military veterans, service members, and their families at the Flames Football game on Saturday, part of Military Emphasis Week, sponsored by the Office of Military Affairs. (Read full coverage of the Flames’ 21-13 victory over Presbyterian.)

Before the game, Liberty hosted a military tailgate on the front lawn of the Hancock Welcome Center, bringing the campus military community together for games and food. As the Flames prepared to take the field, players donned white helmets with a special stars-and-stripes LU monogram decal, complementing their blue and red uniforms.

During an early break in the action, a tearful family reunion lifted spirits in the stadium as Pfc. Christopher Faircloth, who is stationed in Italy, surprised his family, including Flames cheerleader Ashley Faircloth, at the game.

It was an emotional night as the legacy of Maj. Michael Donahue, a former Liberty University ROTC instructor who was killed in Afghanistan last year, was honored. During the halftime show, Donahue was posthumously awarded Liberty’s George Rogers Champion of Freedom Award, which is given annually to a veteran who has displayed extraordinary heroism while serving. The halftime presentation included Marines reenacting the flag raising at Iwo Jima, bringing the crowd to its feet in applause. Liberty’s Spirit of the Mountain marching band paraded across the field, in a “USA” formation at one point, as it played while an enormous American flag — stretching from sideline to sideline and covering over 30 yards of the field — was displayed. A powerful rendition of “God Bless the USA” performed by recording artist Charles Billingsley, closed the spectacle on a stirring note, complemented by bursts of fireworks.

Earlier in the day, a trail on the Liberty Mountain Trail System was named in Donahue’s honor, as he was an avid runner and frequently used the university’s trails near the Liberty Mountain Snowflex Centre. On Saturday, Nov. 14, as Military Emphasis Week comes to an end, a memorial 5-Miler will be held on the Mike Donahue Trail beginning at 9 a.m.

Throughout the week, more events will be held as Liberty continues celebrating its military community. A night of remembrance for fallen heroes will be held Monday night at 7 p.m. in Liberty’s Prayer Chapel. A reception will be held for veterans on Wednesday, Nov. 11 from 11:45 a.m.-1:45 p.m. in the Hancock Welcome Center. Online military students are welcome to participate in Online Communities Military Appreciation Day on Tuesday, where past military-themed Convocations will be broadcast through Liberty’s Online Communities along with live chats with military staff members and giveaways. Learn more and see the full schedule at www.Liberty.edu/MEW. 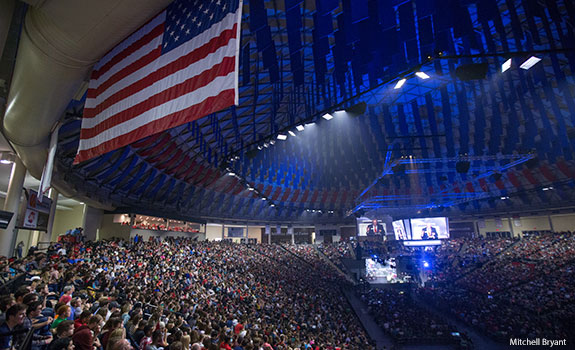 The somber notes of “Taps,” delivered by a lone trumpeter, echoed across Liberty University’s Vines Center as the packed arena honored a moment of silence for those who have served or are serving in the United States armed forces. It was a sobering reminder of the cost of freedom and an appropriate way to begin Liberty’s annual Military Emphasis Week, where campus will host a number of events to show its appreciation for American heroes and their families.

“Around the world we have students that are serving in harm’s way,” said Dr. Steven Keith (Chap. Col. USAF Ret.), director for the Liberty University Center for Chaplaincy in the Rawlings School of Divinity. Liberty is supporting more than 31,000 military service members, veterans, and their spouses as they earn their degrees. Most military students are enrolled in Liberty’s online education program, where they find the flexibility they need to take classes while training, on active duty, or in starting their careers. “They are deployed across the planet and we seek to honor them today. We seek to honor those who have gone before, who have given their time, and have been separated from their families. We seek to honor those who have given their lives.”

With its usual attendance of well over 10,000 students, joined by several of the approximately 2,500 College For A Weekend visitors, Liberty’s Convocation enjoyed one of its most impressive crowds. The increased numbers contributed to an energy and enthusiasm that well reflected Liberty’s commitment to being a military-supportive institution. When David Nasser, Liberty’s senior vice president for spiritual development, asked the crowd to stand and applaud service members and veterans, the arena erupted. He couldn’t even complete the request.

A patriotic thread was woven throughout Convocation. Liberty’s ROTC color guard marched into the arena to lead the Pledge of Allegiance, a video featuring stories from some veteran and military students was shown (see video on right), and the keynote message came from a living hero.

Tim Lee, an evangelist and longtime Liberty University Board of Trustees member, is a double amputee and Purple Heart recipient, having lost his legs while serving in the Vietnam War.

He challenged the crowd to stand up for the virtues that have made America great, while expressing concern that the country’s foundation is under attack.

Military Emphasis Week runs through Nov. 14 with several events planned, including a military tailgate before the Flames Football game on Saturday, which will include a patriotic halftime show. A veteran’s reception will be held on Wednesday, Nov. 11, in the Hancock Welcome Center, and a Military Student Connection at Camp Hydaway on Saturday, Nov. 14, will close out the festivities with games, food, and fellowship for veterans and service members. There are also opportunities to give in support of our heroes through a blood drive and a care package drive. For more information and the complete Military Emphasis Week schedule, visit www.Liberty.edu/MEW.