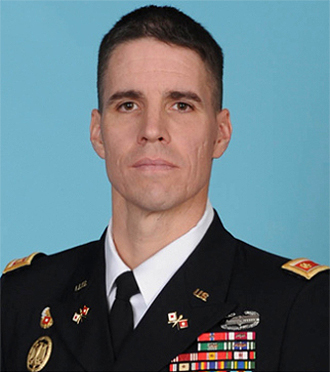 Liberty University mourns the death of former faculty member and Liberty alumnus Major Michael Donahue, 41, who was killed in a Taliban attack Tuesday, Sept. 16, on a U.S. military base outside Kabul, Afghanistan.

Donahue died from wounds suffered when a suicide bomber drove a vehicle laced with explosives into a foreign military convoy on the base. The attack also killed Stephen Byus, 39, of Reynoldsburg, Ohio, and a Polish soldier, and wounded 13 civilians, according to the New York Times.

Donahue, an Ohio native, was a paratrooper for the XVIII Airborne Corps based in Fort Bragg, N.C. He served three tours of duty, was stationed in South Korea, Iraq, and Afghanistan, and planned to return to Liberty after finishing his current deployment.

“Major Donahue was truly an inspiring individual. You only meet a few like him in a lifetime,” said Mark Hine, senior vice president for student affairs.

At Liberty, Donahue was an assistant professor of military science for Liberty’s Army ROTC program from August 2008 to July 2010, during which time he completed his master’s degree in education and most of his Ed.D.

Major Bob Foy spent three years supervising Donahue as chair of the Army ROTC department, and has been best friends with him ever since.

“Mike was really just an amazing officer and an amazing man in every way — spiritually, physically, and intellectually,” Foy said. “He was always positive, always there for the students. He had a huge impact on the students in the program.”

Foy said that the greatest testimony to Donahue’s character was the fact that Foy cited him as an example of exemplary service with each passing ROTC class, year after year.

“There were hundreds of students who came through the program while I worked there, and I used Mike Donahue as an example of who you need to emulate to be successful. As an officer, you can’t go wrong being like Mike Donahue.”

Donahue was also a devoted runner, participating in the trail runners’ club that runs the Liberty Mountain trails each Wednesday. This week, those runners met together and shared a moment of silence in honor of Donahue’s family. Donahue’s son, Seamus, is also an avid runner.

Donahue is survived by his wife, Sherri, and their children Victoria, Seamus, and Bailey.