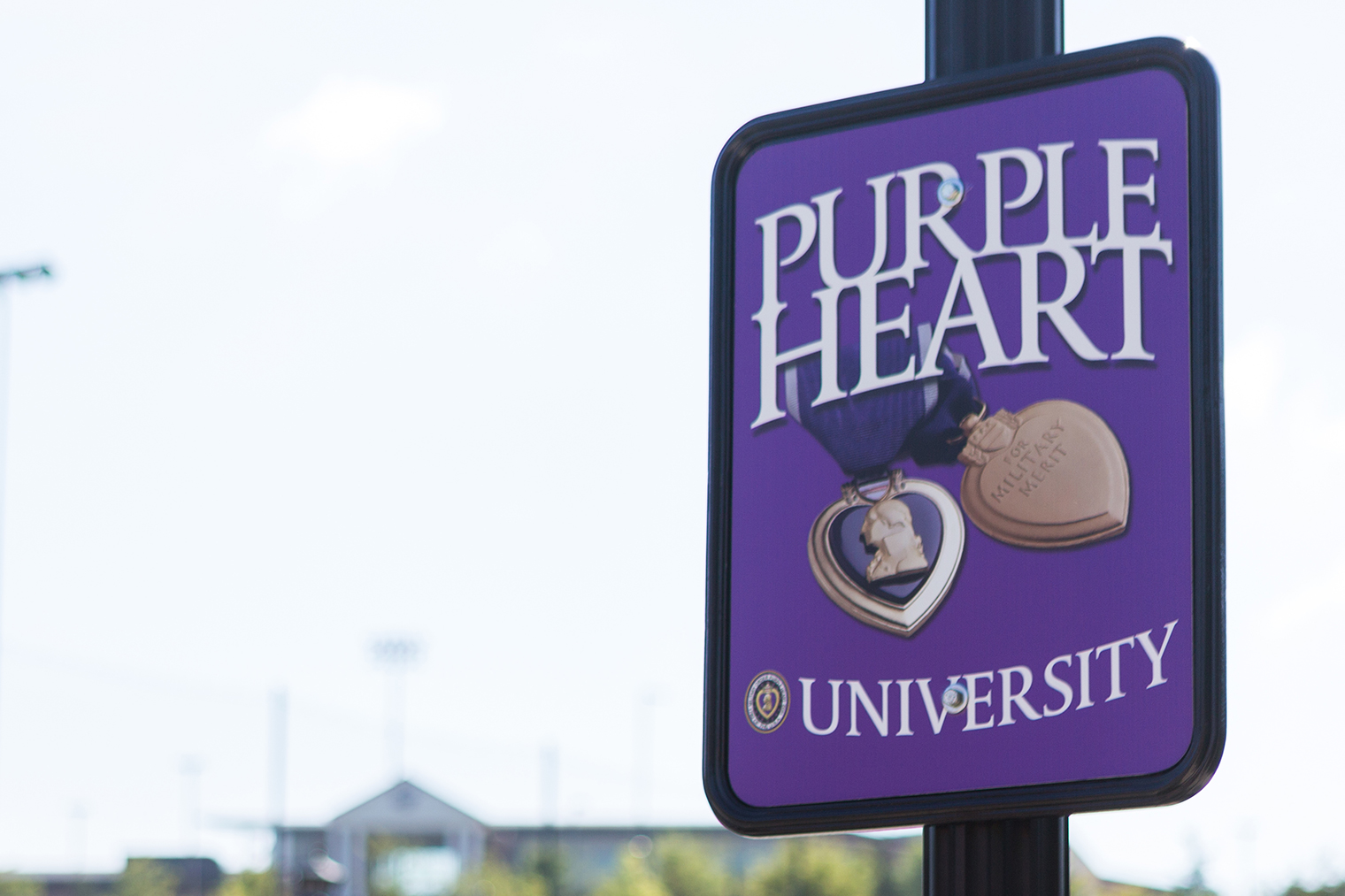 Liberty University was recently designated as a Purple Heart University, making it the first college or university in Virginia to receive the honor from the Military Order of the Purple Heart (MOPH) in recognition of a university’s support of military members, including veterans and their families.

In addition to installing “Purple Heart University” signs at the entrances to campus, the university has also reserved a parking space near DeMoss Hall for Purple Heart recipients and all others who have been wounded during combat while serving in the U.S. armed forces. The space is conveniently located for student veterans visiting the university’s Veterans Center in the Montview Student Union.

Liberty President Jerry Falwell signed a resolution on Thursday, making the designation official. He was joined by local and state MOPH chapter leaders as well as several area veterans, including members of the Lynchburg Area Veterans Council. Liberty joins over 40 colleges and universities nationwide to receive the designation. The Council and the MOPH each presented Falwell with plaques recognizing the university’s support of veterans. 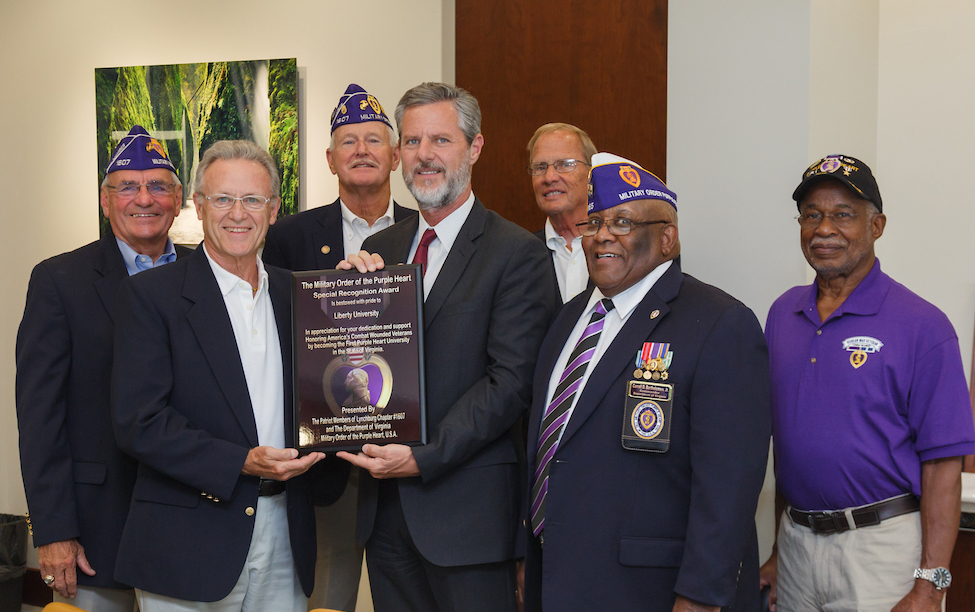 Gary Witt, a local veteran who serves as the commander of the local MOPH Chapter 1607 and also works at the state and national levels of the MOPH, called the day “a great day to be a veteran and to be at Liberty University.”

“When I saw the signs out on the boulevard, my heart skipped a beat,” he said. “We are so pleased that our chapter could be involved.”

He said Liberty was “already doing everything it needed to be a Purple Heart University. To become the first in Virginia is an accomplishment.”

Witt said the local chapter is one of the top five chapters in the nation, “mainly because of what we are doing today — how we interact with the community and the university.” 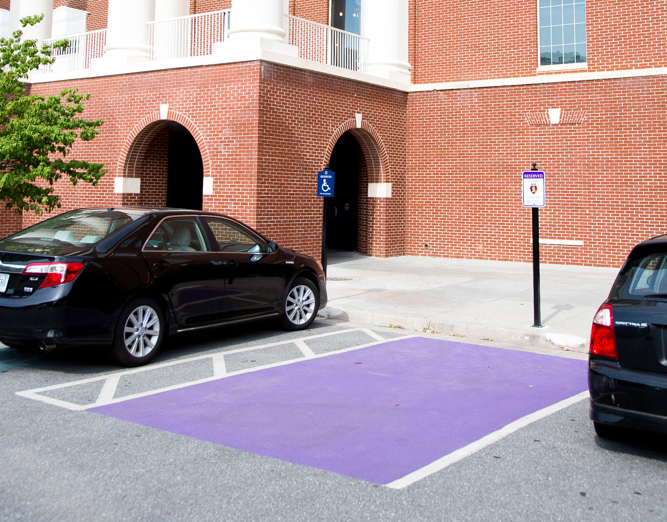 Falwell shared his gratitude to the groups for the designation.

“Liberty is so proud and honored that you recognized us in this way,” he said. “We have always prided ourselves in being a military friendly university. About 30 percent of all of our students have some connection to the military, and 30,000 are in our online program; it’s the only way a lot of them can get their education. It’s something we’re very proud of.”

He also visited with the veterans, thanking them for their service: “We owe our freedom to you, and we can’t say often enough and we can’t honor you enough to ever do it justice, the way you’ve served our country. Thank you.”

The Purple Heart is the nation’s oldest military award, introduced as the “Badge of Military Merit” by Gen. George Washington in 1782. It is one of the most respected medals that U.S. military members can receive. These individuals are honored nationally every year on Purple Heart Day, Aug. 7. Liberty will take part by lighting the top of Freedom Tower in purple lights. 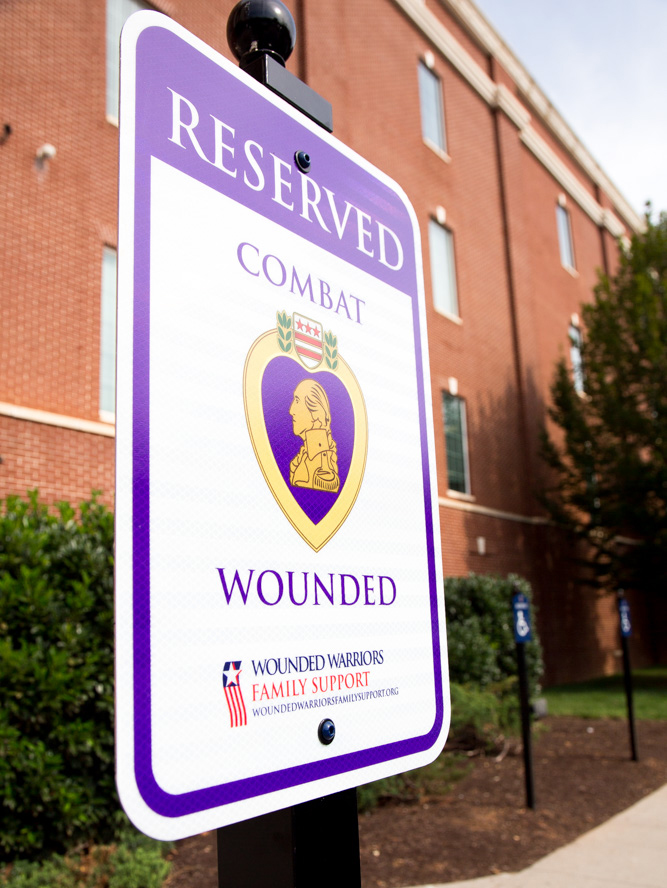 Student veteran Jesse MacDonald, who served as an Airborne Calvary Scout and was combat wounded during his time of service, said he is grateful to attend a university that is so supportive of the military.

“The support for veterans at this university is immense,” he said. “It makes me feel like this school cares about veterans to a degree that nobody else in this immediate areas does.”

He said the Purple Heart University recognition is a testament to Liberty’s work to create and maintain a university that is supportive and accessible for all military members, both during and after service.

“There are a lot of different problems that our demographic and our generation faces, and I see a longing of the administration here to help alleviate some of those things that come along with being a veteran,” MacDonald said. “This parking space helps to show the commitment level of Liberty University to combat-wounded veterans.”

Liberty was ranked No. 4 in the Military Times’ Best for Vets for 2017 and has regularly been recognized by Military Friendly Schools.

“Liberty University is definitely the place to be,” MacDonald said. “Any veterans looking into schools should consider Liberty because of their strong support. The school has invested a great deal into veterans, and I cannot say enough about the support I receive here.”

Liberty holds Military Emphasis Week every year, with multiple opportunities for the university community to show its support of military members. This year, the week will be held on Nov. 6-11, culminating in a grand Military Appreciation Halftime Show during a Flames Football game. The annual George Rogers Champion of Freedom Award is also given at this time; many of the past award winners have been Purple Heart recipients.

This year, Liberty is also hosting Lynchburg’s Veterans Day Parade, planned for the morning of Nov. 11.

Liberty’s Military Affairs Office works throughout the year to ensure that Liberty’s military students and their families receive the support to succeed in their academic and professional careers. Visit the website for more information on education benefits and resources.