'Brigadoon' celebrates the magic of romance 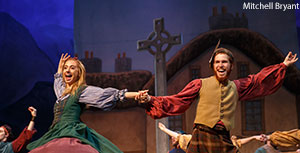 Liberty University’s Department of Theatre Arts will take audiences to an enchanted village in the musical “Brigadoon,” Feb. 19-28 on the Tower Theater stage.

Set in Scotland, “Brigadoon” tells the story of two New Yorkers, Tommy Albright and Jeff Douglas, who find a mysterious village while on a hike. The village of Brigadoon appears for only one day every century, but Tommy finds true love there. Throughout the show, audiences enjoy classic tunes such as “Almost Like Being in Love,” “Come to Me, Bend to Me,” and “The Heather on the Hill.”

Andy Geffken, director of the show and a Liberty theater arts professor, said “Brigadoon” has beautiful music and a compelling story, which makes it a smart choice for the current theater season.

“There are several themes in this play that our audience will be able to relate to. The main conflict is a test of faith for the protagonist, and love is at the heart of these characters,” he said. “I believe this story draws on biblical parallels, which make it even more appropriate for this university to produce.”

Geffken added that audiences will also appreciate the Scottish culture in the show, including bagpipes, kilts, and broadswords. 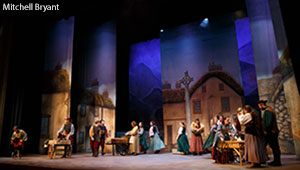 The works of two theater professionals are also featured in the show. Guest choreographer Courtney Cerny came to Liberty from Chicago after performing in a critically acclaimed production of “Brigadoon” at the Goodman Theater. Ron Sumner, a professor of Studio & Digital Arts at Liberty with 15 years of Broadway scenic design experience, painted many of the backdrops.

“Having a guest choreographer and scenic artist of this caliber added tremendous value to this production,” Geffken said.

For the first time, the department will be holding an Instagram contest in conjunction with the show. Guests are encouraged to post photos of their very own “Brigadoon” (their favorite enchanting place) using #brigadoonlu. Every week during the run of the show, a winning photo will be selected. The winner will receive two free tickets to “Brigadoon.”

“Brigadoon” runs Feb. 19-28 with eight performances. Showtimes and tickets are available through the Tower Theater website or by calling the Liberty Ticket Office at (434) 582-7328.