Music students expand horizons during summer internships in major studios and churches across the U.S.

This summer, Liberty University School of Music students are immersing themselves in the workplace through a diverse range of internships in commercial and church settings.

A total of 67 undergraduate students left Lynchburg in May to work at sites across the United States — from Los Angeles to New York — and as far away as England and Africa.

They include many commercial music students with specializations in film scoring, guitar performance, and recording, engineering, and producing, as well as others pursuing degrees in worship leadership, music and worship studies, and music in world cultures. Internships are a graduation requirement for all School of Music students.

Dr. Vernon Whaley, dean of the School of Music, said, “This has been an incredibly positive opportunity for our students.” 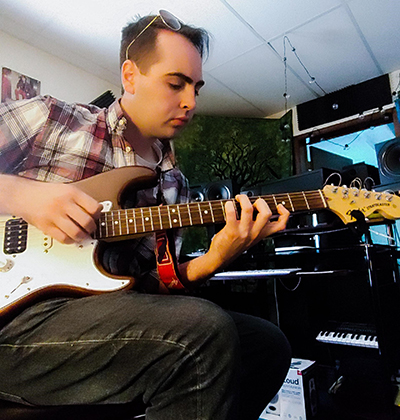 At the historic FAME Studios in Muscle Shoals, Ala., rising senior jazz guitar major Caleb Gordon is working directly for artists. His daily duties include setting up microphones and equipment as well as taking notes for engineers.

“We get a lot of different acts — from country to rhythm & blues to pop … really any genre comes through,” Gordon said, noting Christian rock band Third Day recorded its final studio album there last year.

FAME Studios, a popular tourist attraction, were founded in 1959 by Rick Hall as a safe space for a racially diverse mix of musicians to work together in the segregated South. They catered to blues and soul artists such as Wilson Pickett, Aretha Franklin, and Etta James in the early years before attracting more pop and country singers in the 1970s and 80s.

Gordon said he has already worked on recording sessions with Maggie Rose, Mick Hayes, Lisa Mills, and Savants of Soul, a Gainesville, Fla.-based band that spent 10 days in the studios, and has met renowned session players Clayton Ivey and Will McFarland.

“It’s been really cool to witness what people have been producing,” said Gordon, who has also had opportunities to play and record in the studios after hours. “I get to spend a lot of quality time with them, asking questions to improve my understanding of the industry.”

Gordon is earning his Bachelor of Music in Commercial Music — Jazz Studies at Liberty.

“My degree teaches me a lot of theory and technical playing knowledge and sets me up for a future on the practical applied side of music,” Gordon said. “This adds another skill set that makes my future a bit more marketable as a musician on the production side.”

He plays electric guitar in the Sunday worship band at Highland Park Baptist Church, which is hosting him at its intern house and providing a food stipend for groceries. 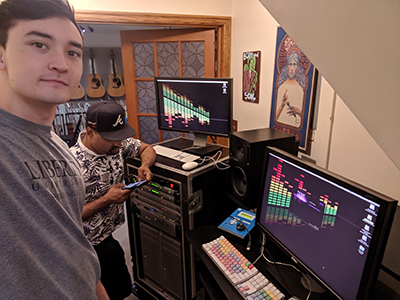 Kenji Standlee, a rising junior majoring in film scoring, is working at Troy Entertainment in Los Angeles, producing pieces for its Brand New Day orchestral catalog that is soon to be launched. He uses software programs to compose music to accompany mostly action and suspense scenes for TV shows and movies.

“A lot of times, (a company) cannot afford to hire musicians, so part of the job is to make those pieces sound as realistic and as close to a live orchestra as possible without going over budget,” he said.

Standlee, who grew up in Japan and started playing piano after his family relocated to Houston, discovered at an early age his preference for composing over performing.

“I found that a lot of my compositions sounded like film scores and I decided I was going to take that path,” he said. “Film scoring is an incredibly competitive field to get into, and you have to be at the top of your game. Most studios are incredibly fast-paced.”

At Liberty, he said he loves the bonds formed and camaraderie cultivated between School of Music students, who spend late nights together perfecting their craft.

“Everybody wants you to succeed,” he said. “They are incredibly skilled and willing to help and that creates an atmosphere of service and love that has definitely helped me to learn.”

In Southern California, Standlee has stood out by sharing God’s grace and reflecting His light through his music. His gifts and personal approach to relationship-building have not gone unnoticed.

“These studios have offered work for me after college, which is incredibly reassuring,” Standlee said. “Connections are how you get the next gig and it seems like God is calling me to work here in L.A.” 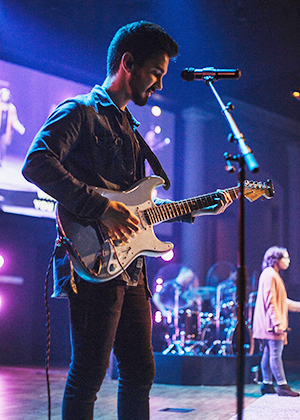 Sergio Augusto Rocha De Queiroz, a rising senior from Brazil majoring in worship leadership, has spent his summer in Rochester, N.Y., working with the main worship pastor at the non-denominational Northridge Church, which has multiple campuses in an otherwise unchurched area.

“It averages more than 2,000 people per week and is growing exponentially. People are getting baptized every month,” he said.

On Sundays, he plays guitar, sings, and occasionally runs the soundboard in two worship services. During the week, he helps select songs and provide technical support in programming the lighting and pre-recorded tracks for specific instruments to enhance the sound of the live production. He is one of five Northridge interns from Liberty (one works with video and production and three are Rawlings School of Divinity students serving with the ministry team). 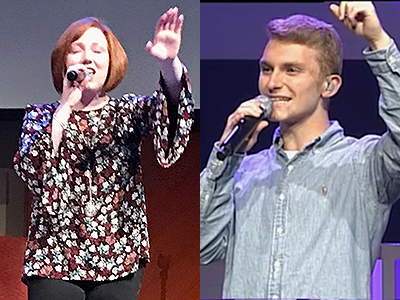 Fellow School of Music students Amy Blalock and Steven VanHorn, rising seniors in the worship studies program, are serving on the worship team at First Baptist Church in Dallas, which averages 10,000 attendees.

Blalock plays the oboe and VanHorn plays the piano in the orchestra on alternati
ng Sundays and she has also sung on several church-produced CD recordings. Both helped to lead a VBS worship camp for youth and an orchestra camp for older teenagers in late June.

Liberty also has four students from its Bachelor of Science in Music in World Cultures program in Redding, England, as well as two students in northern Africa helping worship leaders write Christian songs in their native style.

“These internships are a great opportunity for our students and a great recruiting tool for the university,” said Hanna Byrd, director of practica for the School of Music. “Many of our students have received job offers from their internships, and these students are representing Liberty’s programs — and what it means to live like Christ — in the marketplace.”