President Jimmy Carter spurs Class of 2018 to success through service

Crowds assembled inside Liberty University’s Williams Stadium on Saturday morning, not letting the rain dampen their spirits as they celebrated the 45th Commencement.

The Class of 2018 is the largest in Liberty’s history, with close to 20,200 graduates, including over 16,700 who earned their degrees through the online program. About 8,000 graduates participated in the ceremonies on campus. (Read more Class of 2018 facts.)

It was also a historic day as graduates heard from President Jimmy Carter, the third Liberty Commencement speaker to have held the office of U.S president. The university has hosted two U.S. presidents while in office — George H.W. Bush in 1990 and Donald J. Trump last year.

“Every one of us decides, ‘This is the kind of person I choose to be,’” the 39th President of the United States told the crowd. “We’re the ones who decide, ‘Do I hate or am I filled with love … do I think only about myself or do I care for others?’ … There are no limits to our ambitions as human beings.”

“One of the things we have to learn is how to get along, to do good for one another … in other words, just following the mandates of the Prince of Peace. … We don’t need enemies to fight, nor do we need ‘inferior’ people whom we can dominate,” Carter said, quoting Galatians 3:28: “There is neither Jew nor Greek, there is neither male or female, there is neither slave nor master, for ye are all one, all one, in Christ Jesus.”

He challenged the graduates to use their platform from a land of freedom and opportunity in an ever-connected world to make a difference.

“Right now, you have the maximum opportunity to use the three gifts that God gives every one of us — life, freedom, and an opportunity to live a completely successful life — as judged by God,” Carter said. “We have a perfect example to follow if we are in doubt; we just have to remember the perfect life of Jesus Christ.”

Before Carter’s speech, Liberty President Jerry Falwell recalled how he met Carter at a private worship service on the morning of Trump’s inauguration and was impressed by Carter’s “kind demeanor, humility, and warmth.” Falwell called it “one of the highest honors” of his life to introduce the president at Liberty. He gave Carter a tour of campus on Friday.

Falwell celebrated Carter for living with the “courage of conviction.” During his presidency (1977-81), Carter defied his own party to oppose federal funding for abortion. He advocated for the poor and downtrodden in office and, in the decades that followed, started The Carter Center and served with Habitat for Humanity. (LU students recently completed a home for the organization). In 2002, Carter was awarded the Nobel Peace Prize for his lifetime of service.

“I am proud that Christians are uniting here today on issues where they agree rather than fighting over issues where they disagree,” Falwell said. “I pray that more men and women aspire to serve in public office with such courage.”

Carson shared a few words with the Class of 2018, challenging them to love their neighbors and build a better world for those around them.

“We’ve got plenty of people who are smart but not a whole lot of people who care about everybody else,” Carson said. “That is what we are hoping for you graduates today.” He encouraged them with the wisdom from Proverbs, which he says he reads every day: “Trust in the Lord with all your heart; lean not to your own understanding; in all your ways acknowledge Him and He will direct your path.”

Carson is the keynote speaker at the Degree Presentation Ceremony for the first graduating class from Liberty University College of Osteopathic Medicine, to be held later in the afternoon.

At Commencement, Liberty thanked the more than 6,200 military service members, veterans, and military spouses in the Class of 2018 for their service. (These graduates were also honored at a special ceremony Friday night.)

In his address to graduates, Falwell talked about the miracle that is Liberty University. He recounted some of the hardships that his father, Liberty founder Dr. Jerry Falwell, and his grandfather faced.

“My own dad would not have been born had it not been for the tragedies that his parents faced,” Falwell said. “We usually can’t make sense of our sorrows as we are going through them … but God knows what He is doing and He can be trusted. … All you have to do is look around this campus and look at these wonderful graduates to see how joy grew out of suffering.”

Falwell also celebrated the recent birth of his first grandchild, Virginia Rose Falwell, “the latest manifestation of God’s faithfulness in one family — my family.”

Throughout campus, graduates shared hugs and selfies. Gail Wiggins, who earned her master’s degree in human services – marriage and family counseling, said she was “ecstatic and grateful” to be in the stadium. She was honored to hear from Carter.

“I feel like everything he said can be just nuggets of knowledge for our toolbox,” Wiggins said. “He had so much life experience to share with us.”

Devin Nicholson, who earned a bachelor’s in interdisciplinary studies, survived a serious car crash four years ago and felt blessed to have overcome so much to make it to her graduation. 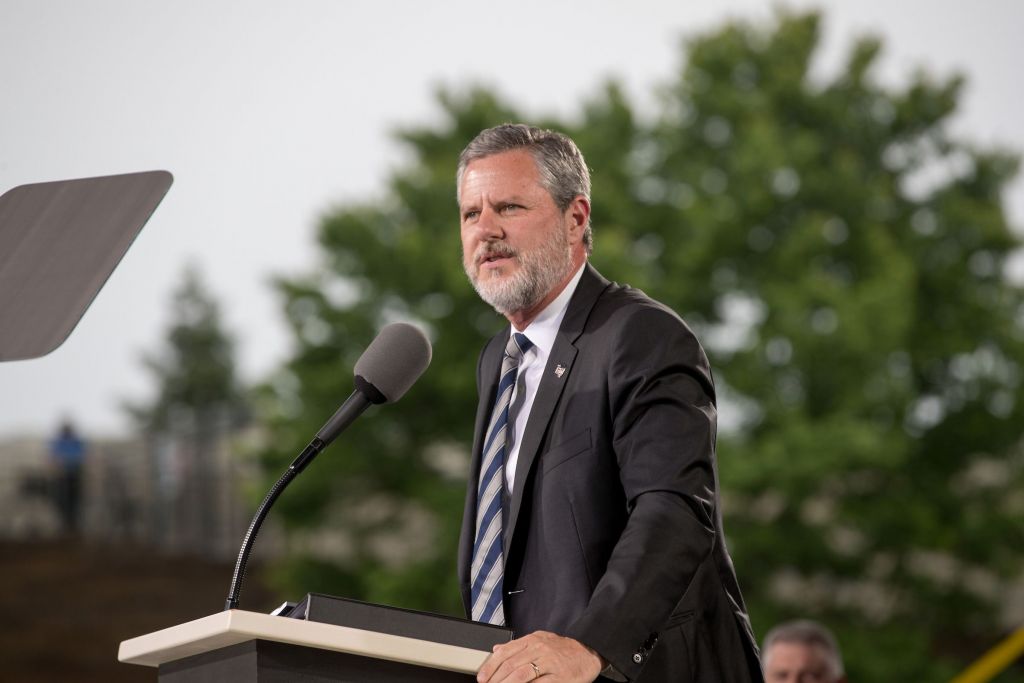 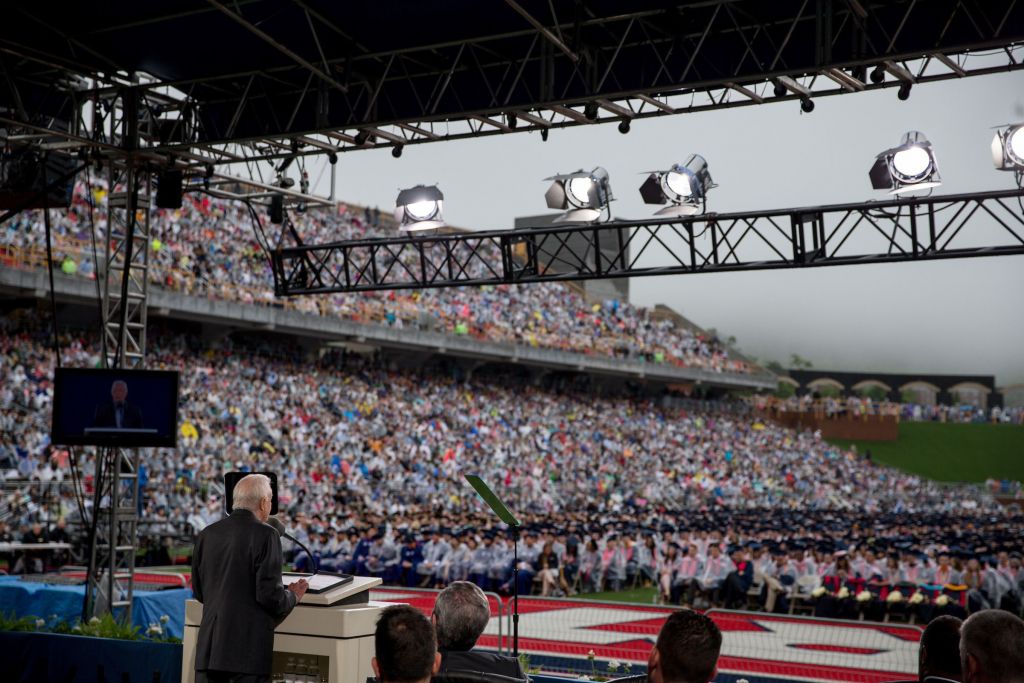 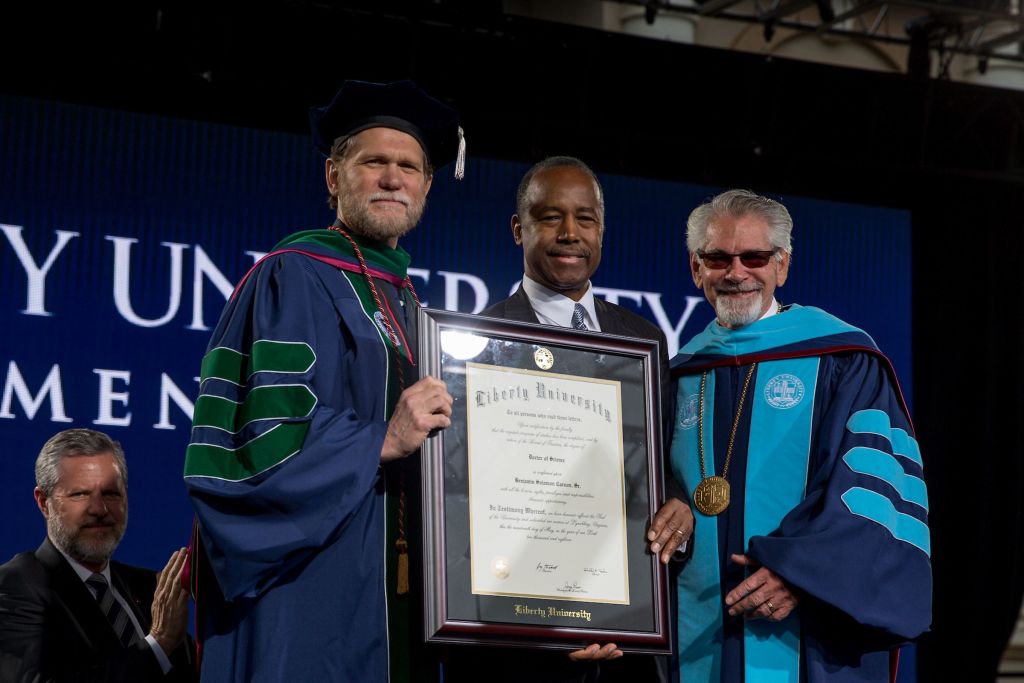 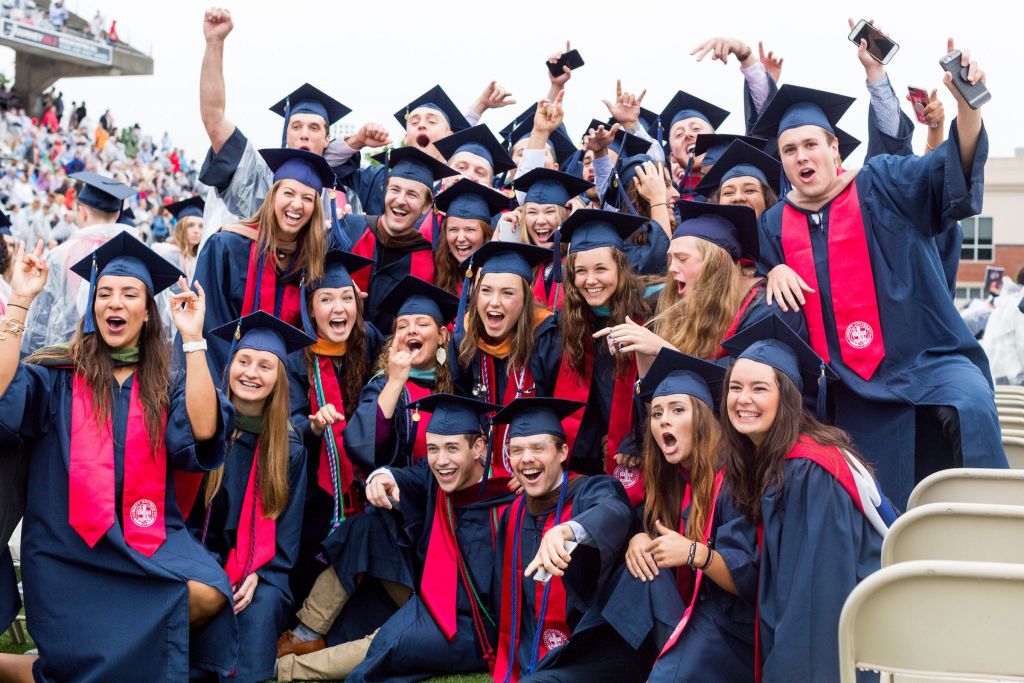 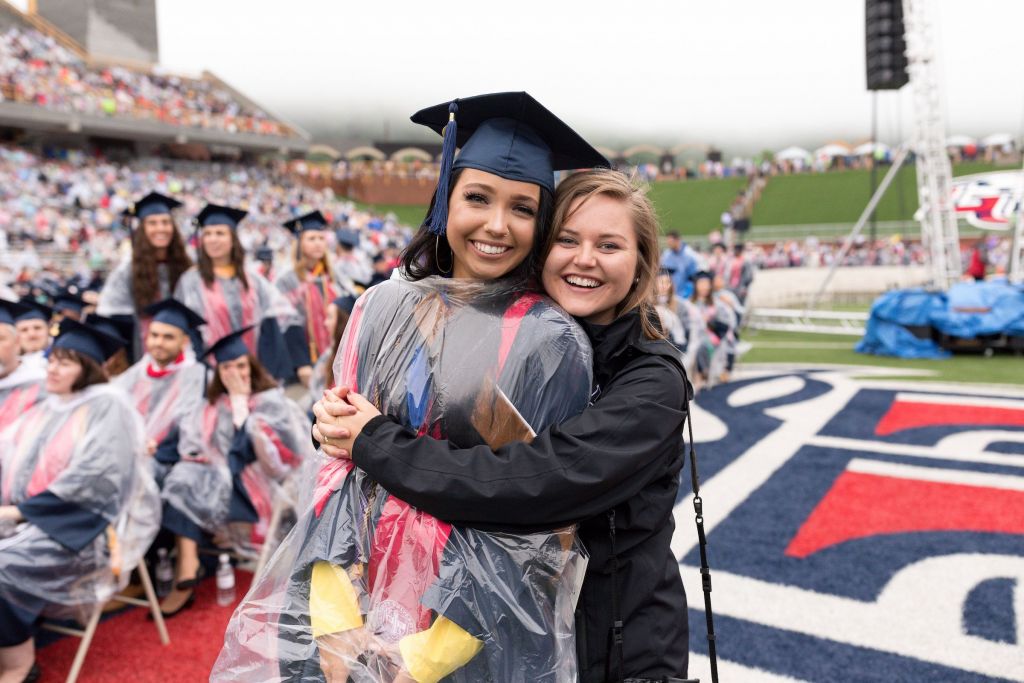 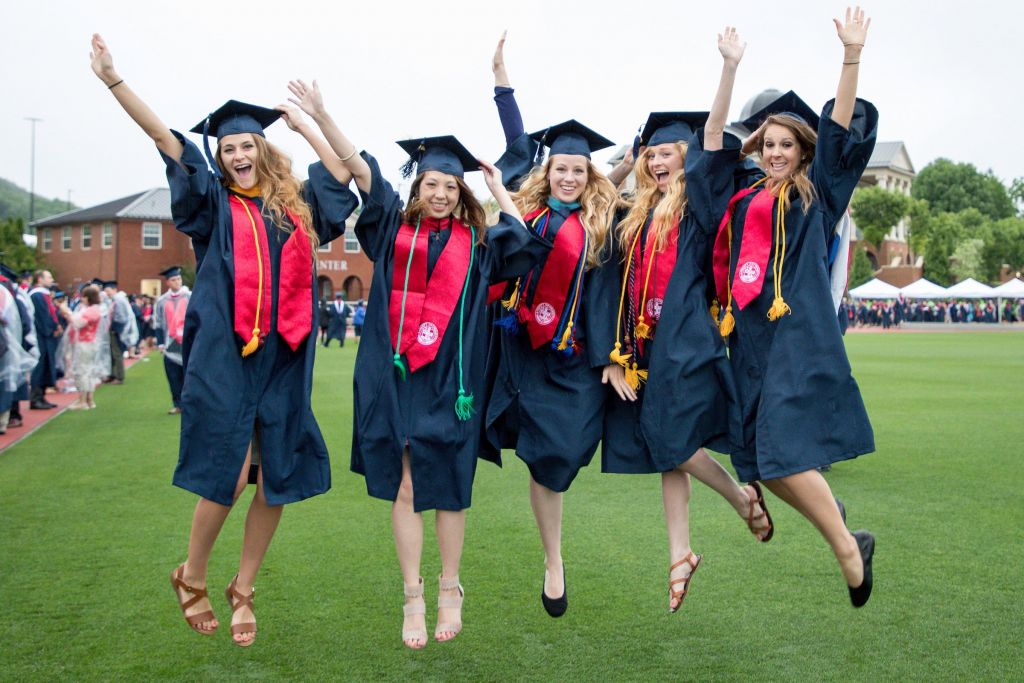 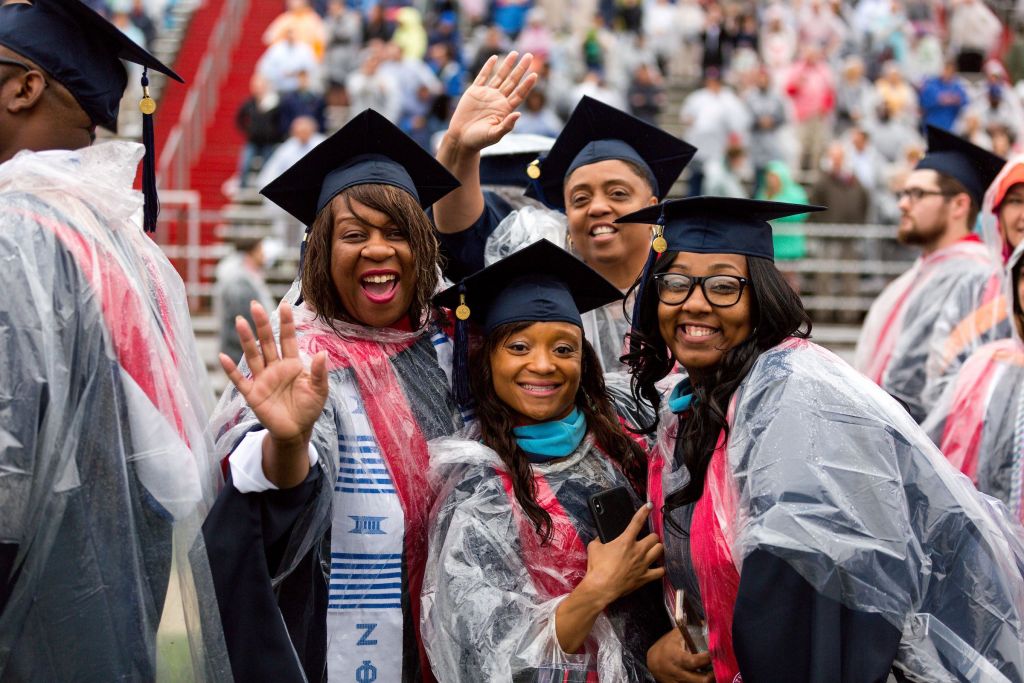 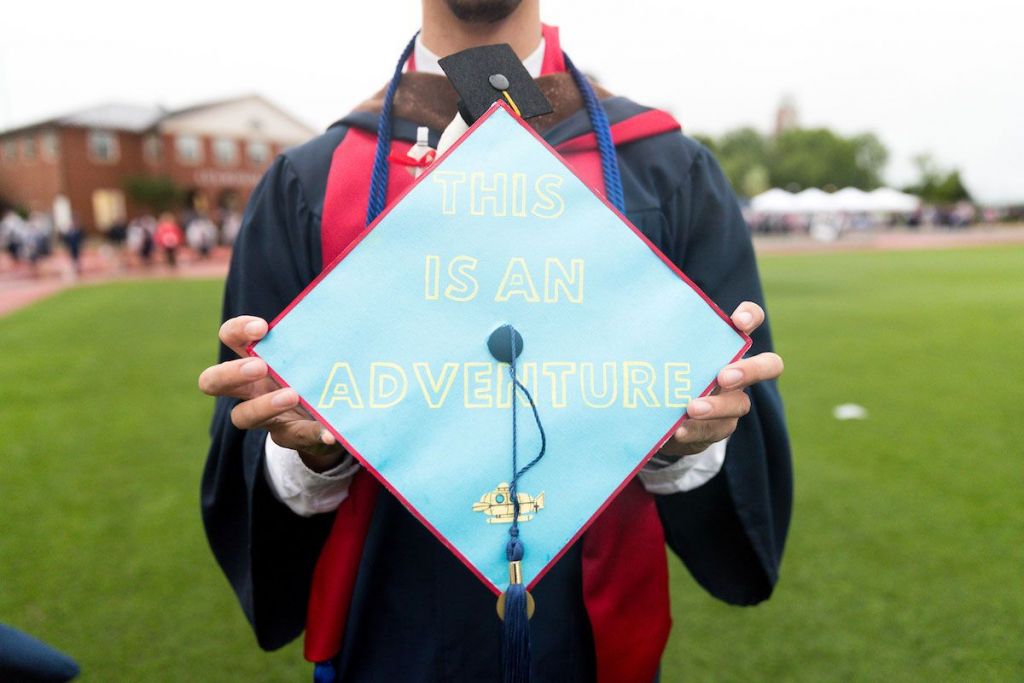 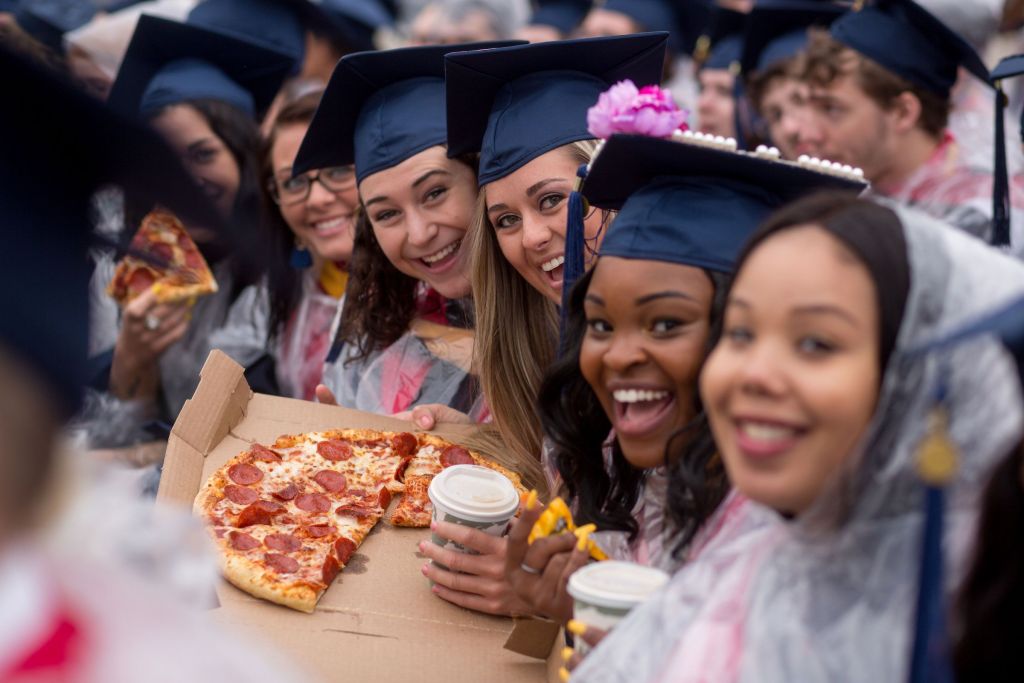 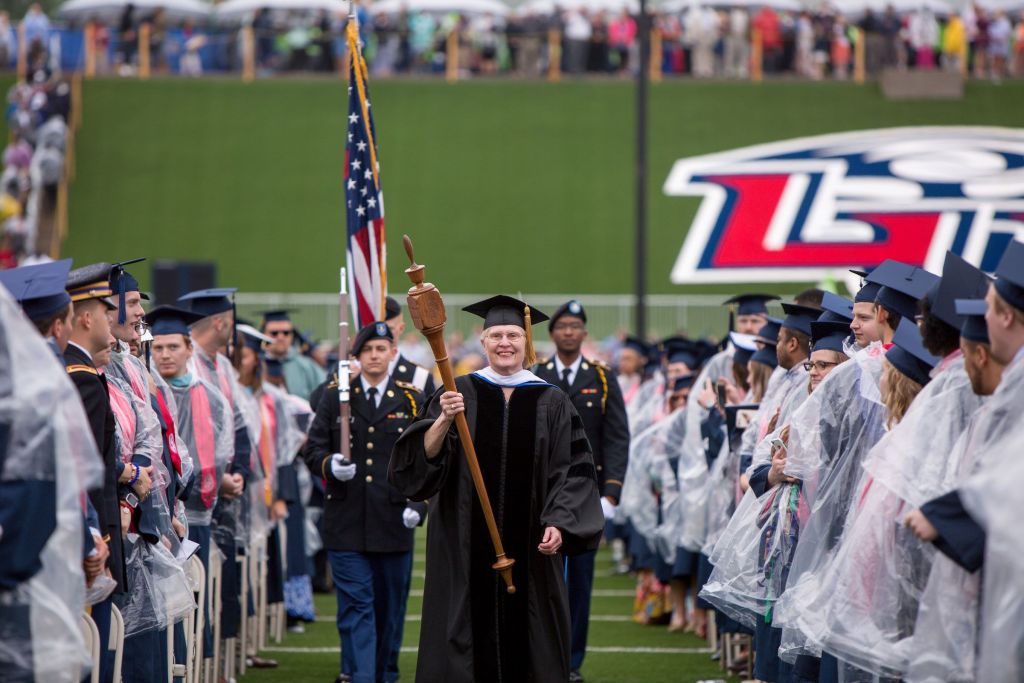 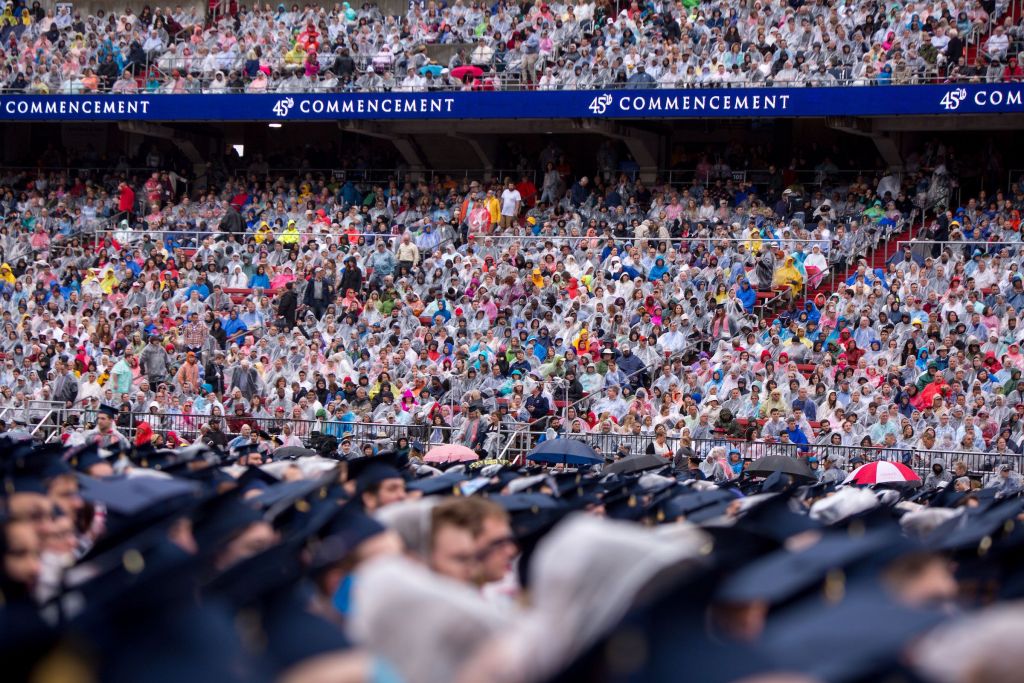 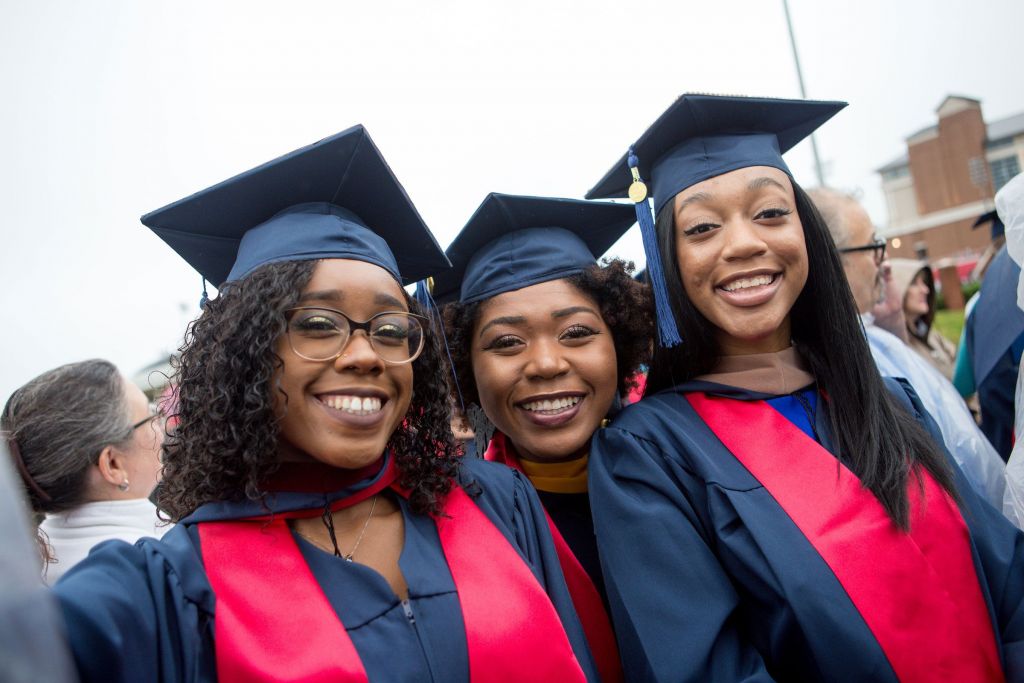 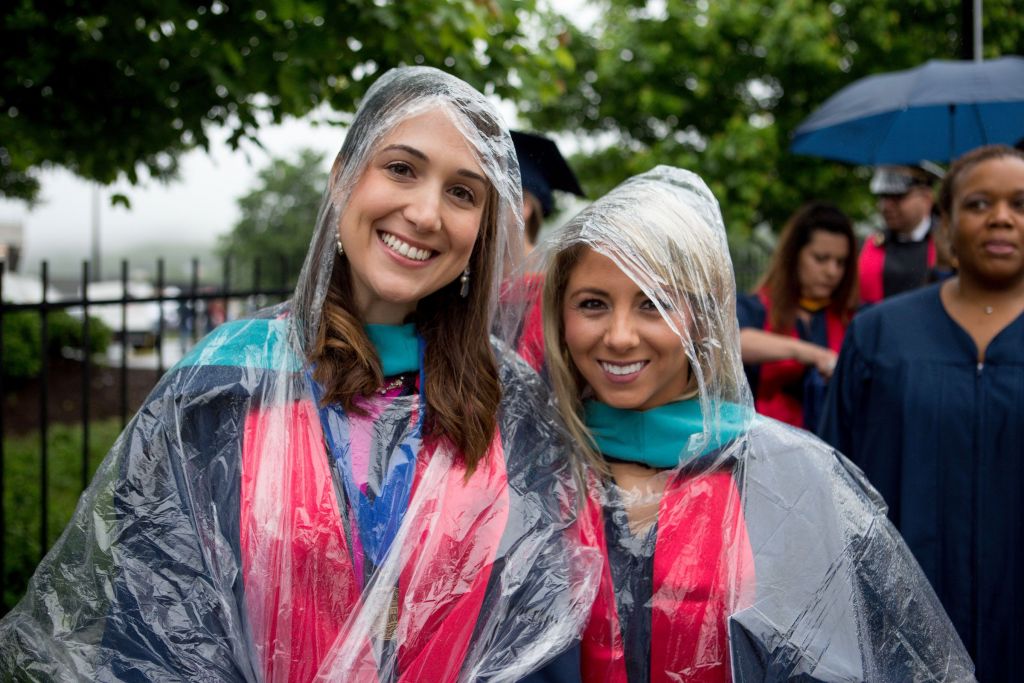 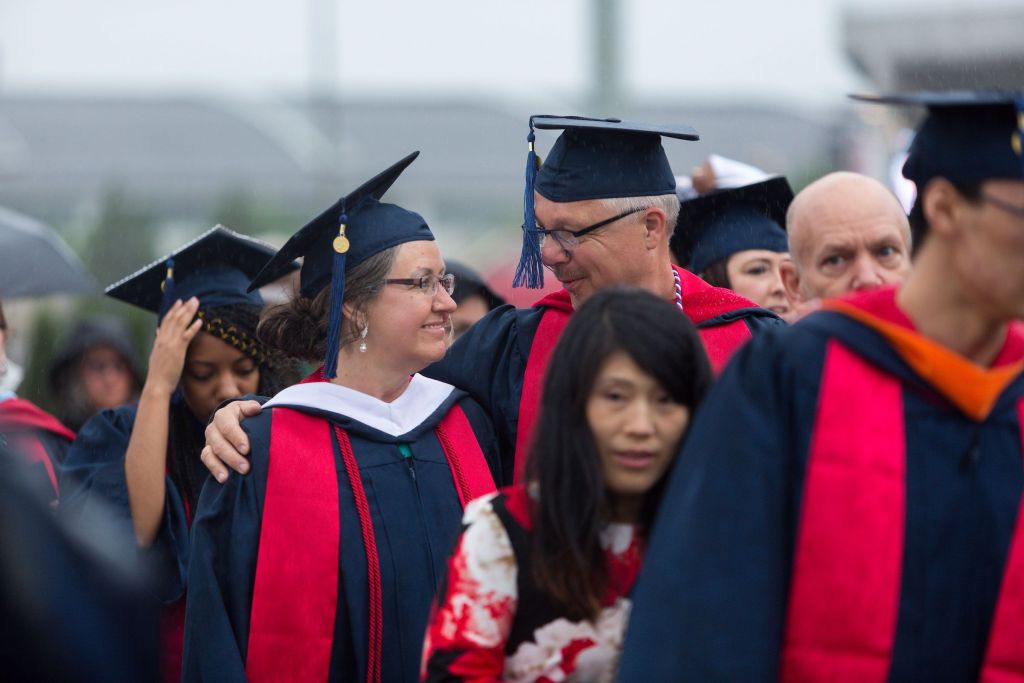 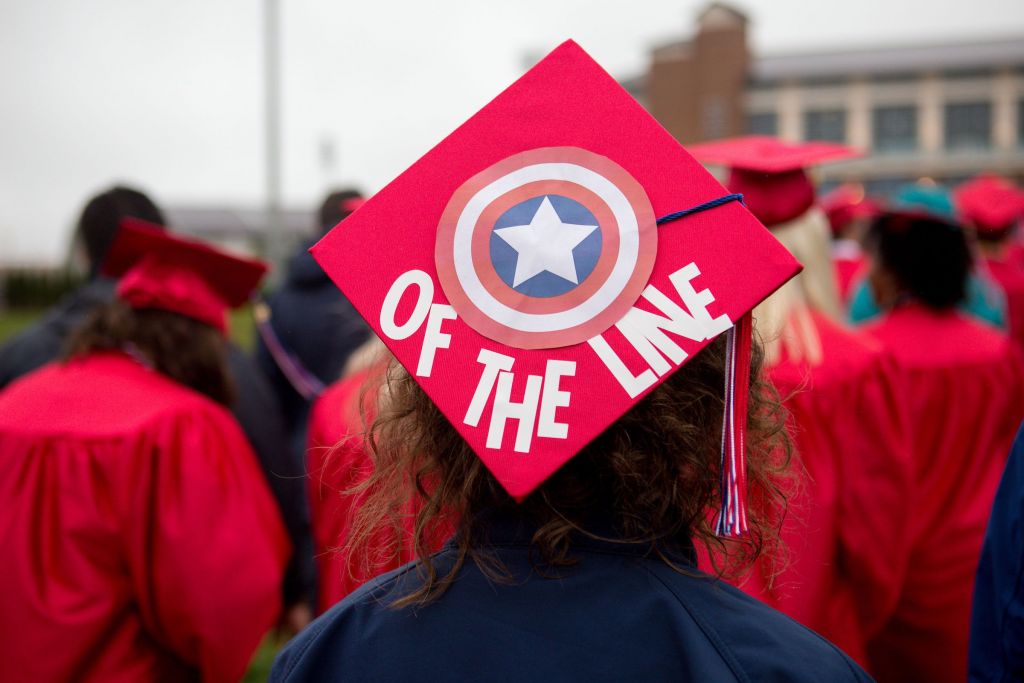 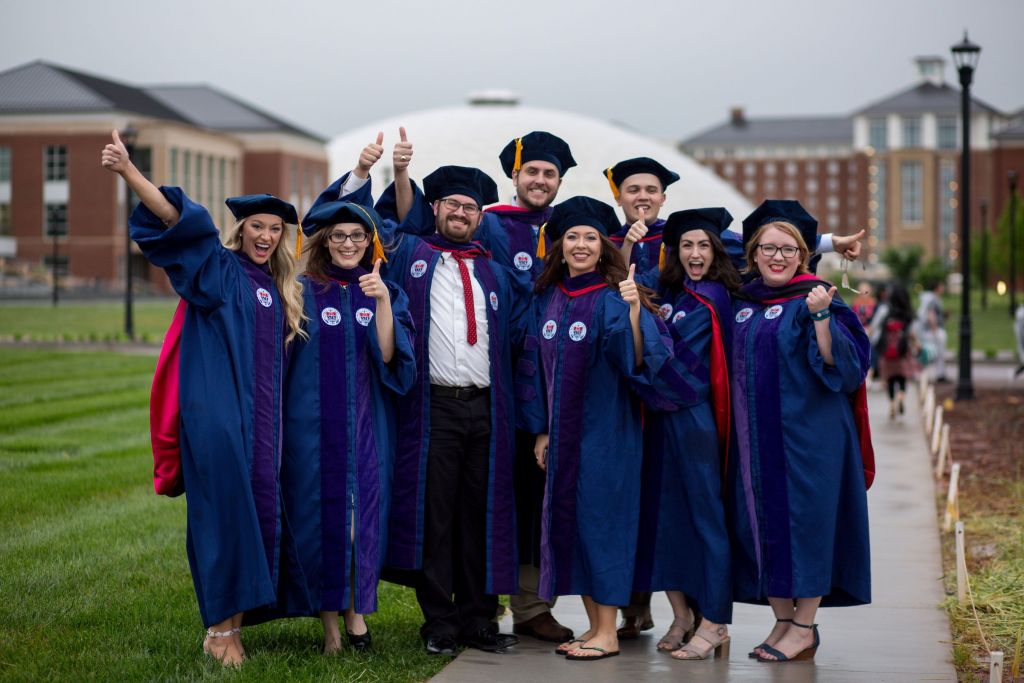 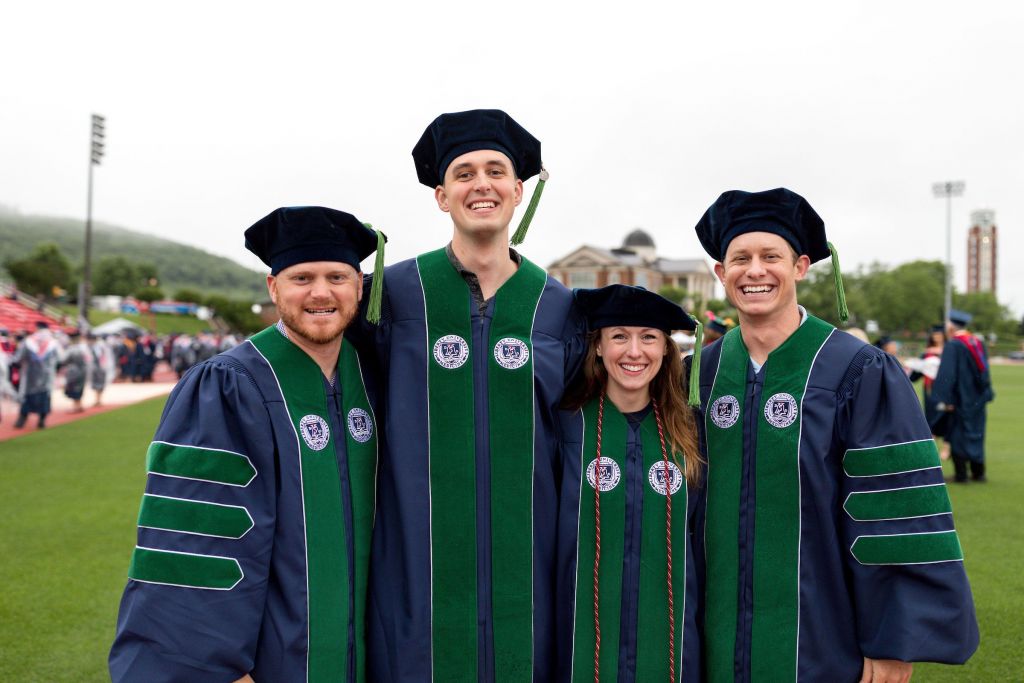 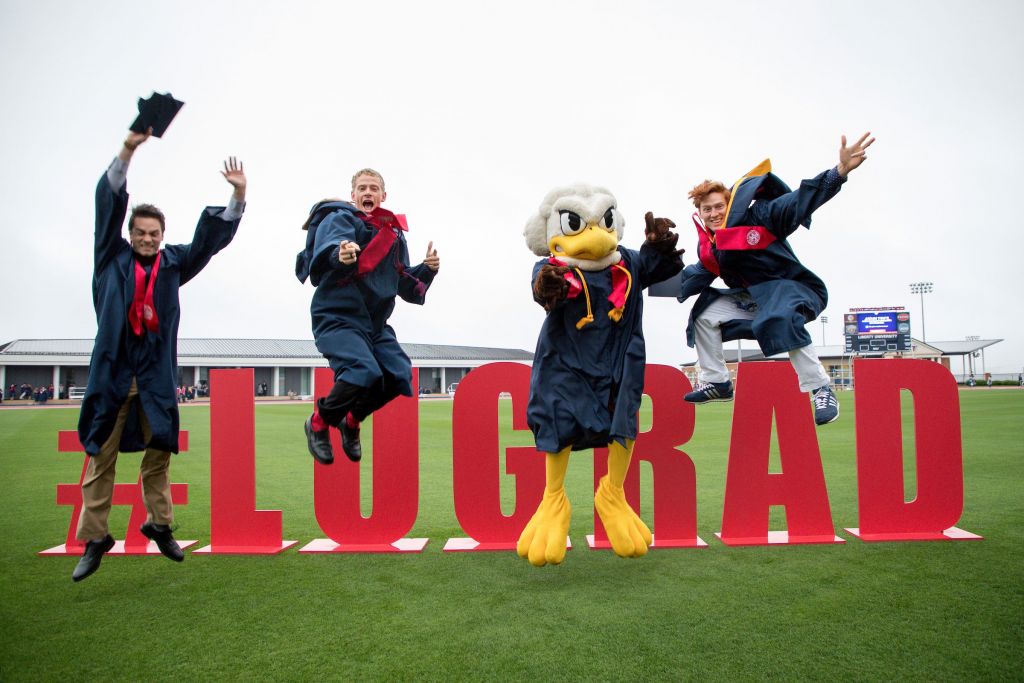 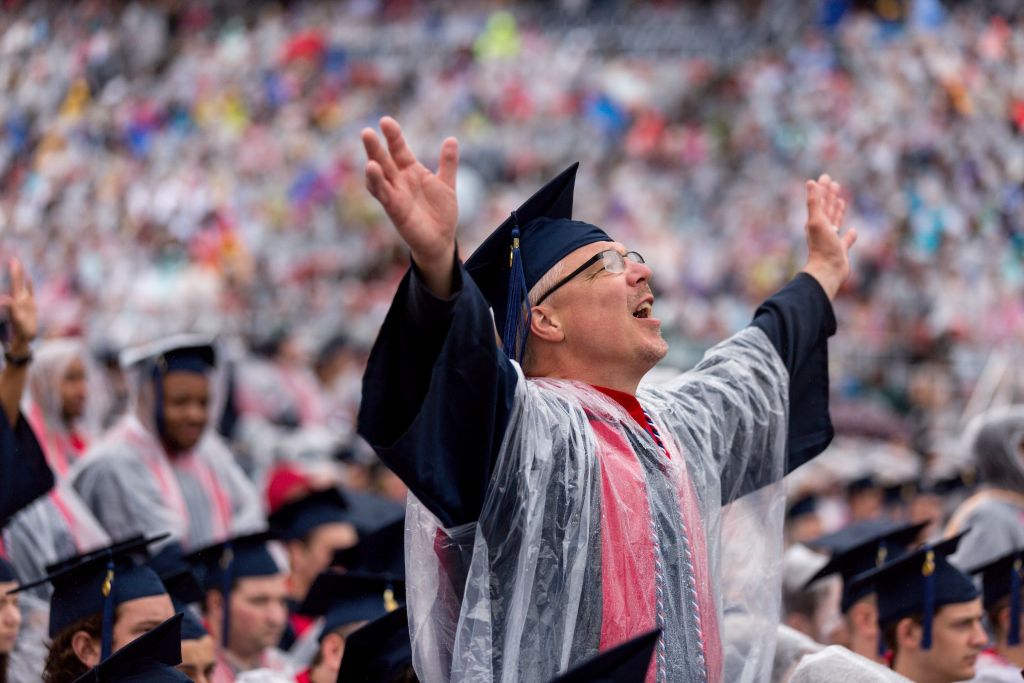 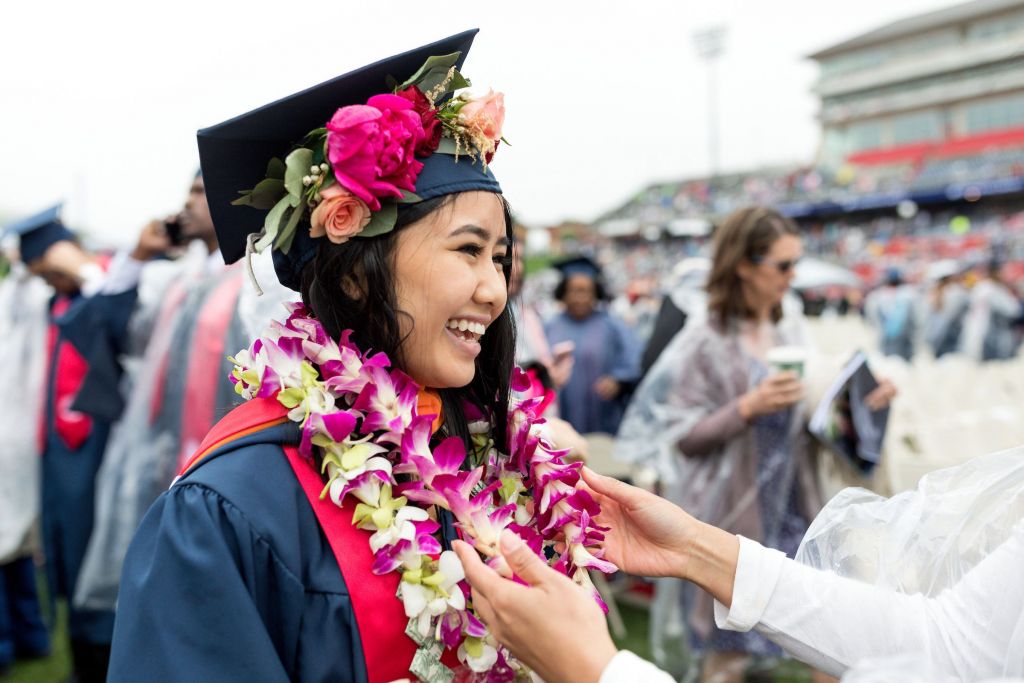 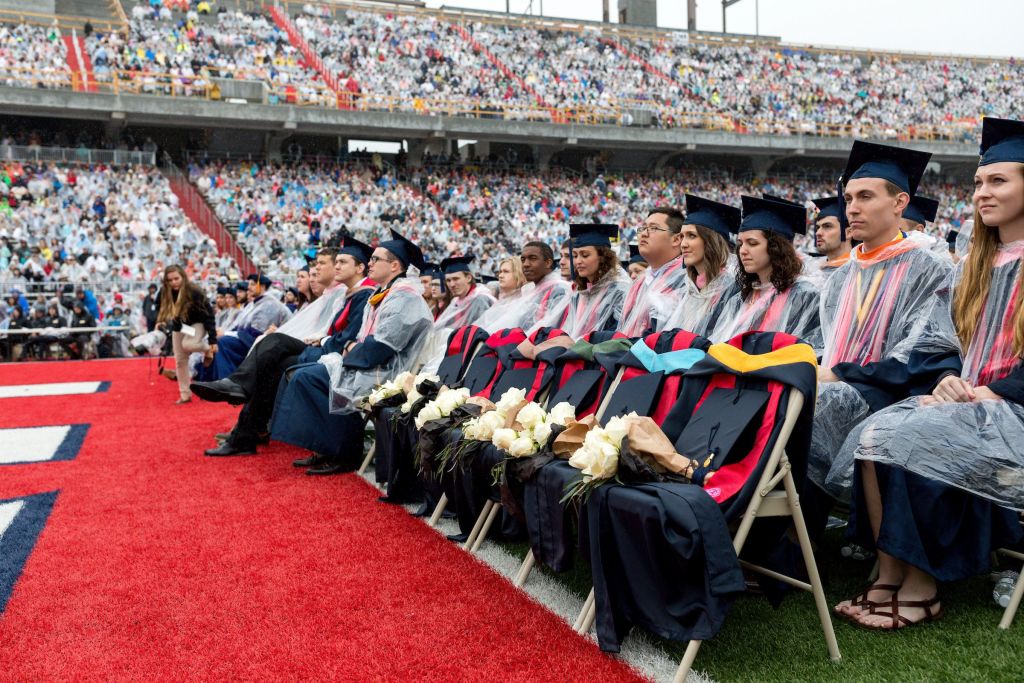 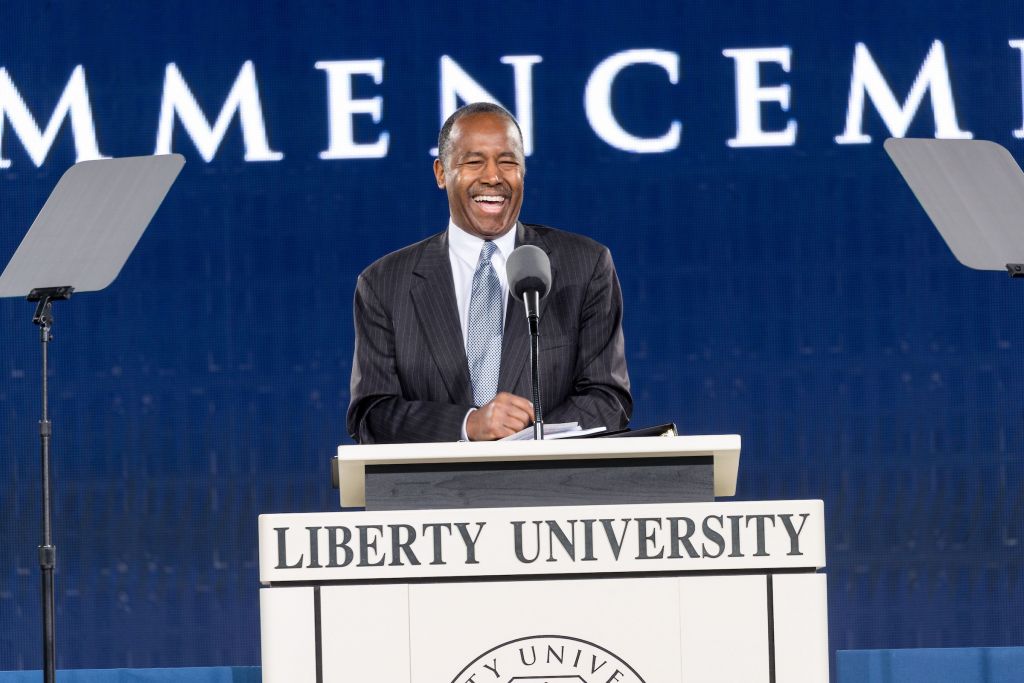 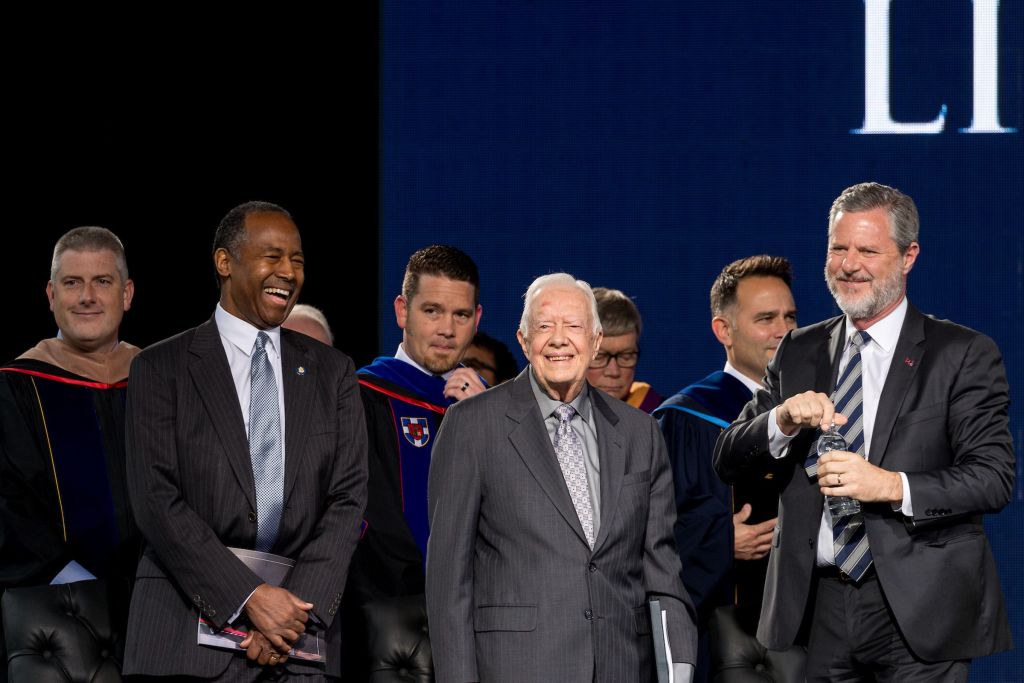 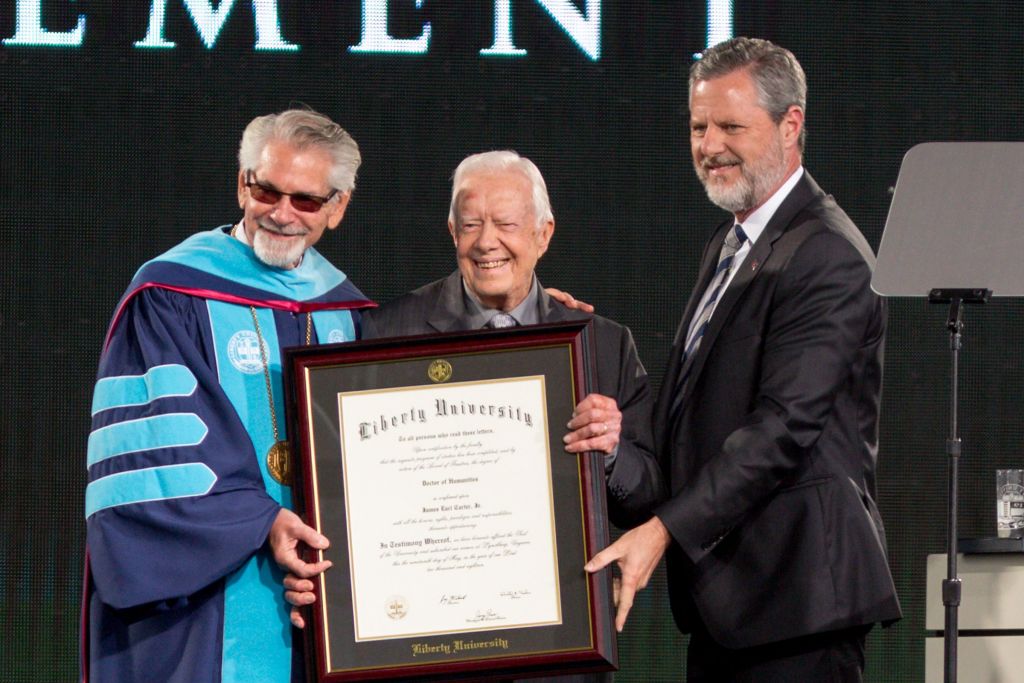 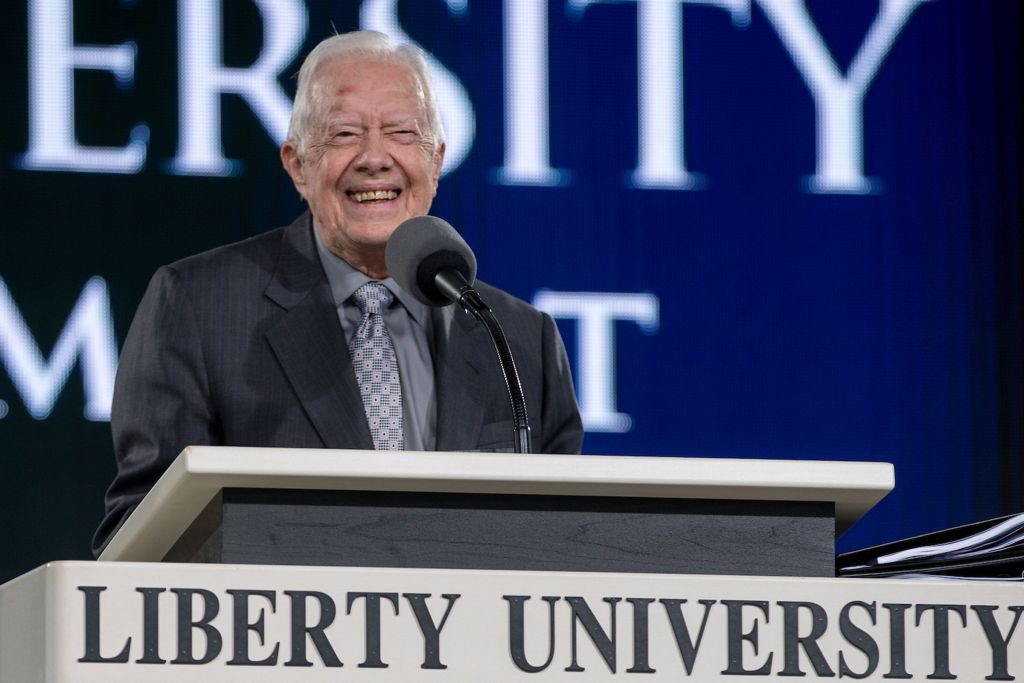