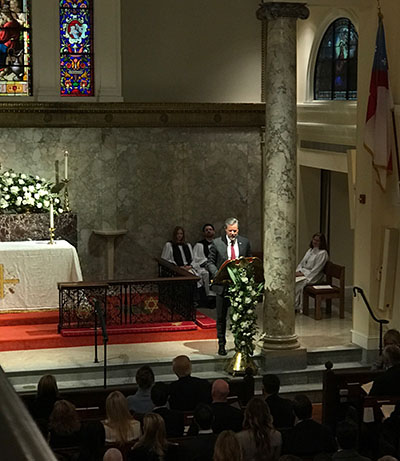 Liberty University President Jerry Falwell was honored to read his favorite passage of Scripture to incoming U.S. President Donald Trump and select guests in a private ceremony at St. John’s Episcopal Church in Washington, D.C., just hours before Trump was sworn in as the nation’s 45th president. Falwell chose to read Matthew 6:5-13.

“Mr. Trump was sitting right in front of me, and he was smiling ear to ear the whole time,” Falwell said. “He loved it.”

Falwell did, too, describing the opportunity as a great honor. The audience for this reading was very exclusive — the president-elect, vice president-elect, their families, the president’s new cabinet, and invited guests. Falwell had a chance to speak with many of them and celebrate the upcoming Trump presidency.

Jimmy Carter, 39th President of the United States, was in attendance and was especially warm, Falwell said.

“He stopped me afterward and told me he thought I did a good job,” Falwell said. “He said he saw my name on the program before I spoke, and he thought it was great that I’d be here to read Scripture. He was very kind.”

After the service, the attendees went to the Capitol for the Inauguration ceremony.

Read about students who took part in Inauguration Day events on campus and in Washington, D.C.