Standing at the gateway to Liberty University’s athletics corridor, the magnificent new Liberty Indoor Football Practice Facility is symbolic of the transformation Flames Football is undertaking as it reclassifies from a Football Championship Subdivision (FCS) to a Football Bowl Subdivision (FBS) program over the next two seasons.

During the event, hundreds of Liberty staff and guests had an opportunity to hear from university administrators, including Director of Athletics Ian McCaw, Head Football Coach Turner Gill, and President Jerry Falwell.

“I can’t tell you how excited I am,” said Falwell, who announced plans to build the facility at halftime of the Flames’ upset of Coastal Carolina on Nov. 19, 2015. “It hasn’t been too many years ago that the FBS seemed like something that would happen in the next generation and an indoor football practice facility was something that we would only dream about. I thought it would be a long time coming, so to see it actually being finished this quickly is beyond exciting. It’s really going to take our football program to another level.”

Falwell noted Gill advised him to build the facility on its present site, rather than near the railroad tracks along Regents Parkway, the original location selected.

Gill thanked Falwell for continuing to invest in the Flames Football program and the entire Liberty University community.

“I also want to thank the former players, all the people who have played here before, staff, coaches, players,” he said. “Your blood, sweat, and tears have helped to bring this here. We need everybody here as we continue to move forward.” (Watch a Game On interview with Gill about the Flames’ transition to the FBS, filmed inside the new facility this past spring.)

“This is truly one of the very best indoor football practice facilities in all of college football, and it’s right here on our campus at Liberty,” he said. “It’s a great asset for Coach Gill from a recruiting standpoint. We are truly blessed with this facility and, of course, it’s a big piece of the puzzle as we move this football program to the FBS level. What a great time this is to be a part of Flames Nation and to see all of the amazing things that are happening right now.”

Flames Football Director of Spiritual Development Ed Gomes offered a dedicatory prayer before Falwell, Gill, and McCaw assisted with the official ribbon cutting. He prayed that Liberty will be able to use the facility to Train Champions for Christ and bring glory and honor to God, not only in athletics, but in every department on campus.

The 95,000 square-foot structure provides the Flames a full-size AstroTurf indoor football practice field, plus end zones, with a 70-foot ceiling clearance allowing for special teams drills. Located at the northeast end of Williams Stadium, the facility towers over the adjacent Football Operations Center and is nearly as tall as the five-story Williams Stadium Tower, added in 2010. It features plenty of glass in its construction, allowing for natural lighting, as well as a breezeway exit onto Liberty’s outdoor practice field, also covered with AstroTurf.

“It’s more beautiful than most indoor practice facilities,” Falwell said. “Most of them are so big, they’re just monstrosities, and we didn’t want to put it up on a hill, but our architects found a way to sink it into the ground about 10 feet to keep it from overpowering the view on campus.” 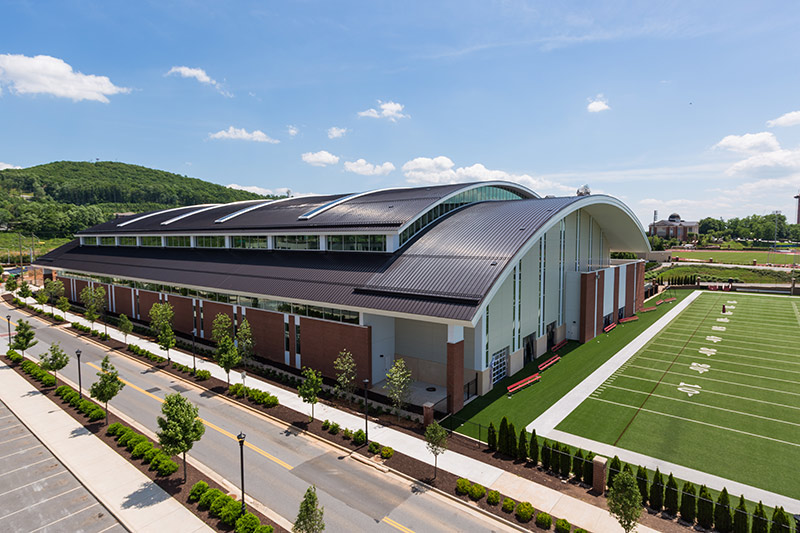 The facility will also house the visiting team’s locker room, which was formerly located beyond the south end zone of Williams Stadium but was torn down to make room for temporary bleachers for Liberty’s 44th Commencement Exercises in May. The Indoor Practice Facility was used for some degree presentations during Commencement and hosted summer football camps starting in June.

Liberty Football will open its 2017 season Sept. 2 at Baylor University and will compete in its final season in the Big South Conference before moving up to the FBS level as an independent, with 2018 serving as a transition season. The Flames will become FBS bowl-eligible in 2019. View schedules and ticket information at LibertyFlames.com.

Football won’t be the only athletics program that will use the new facility. Liberty student-athletes from multiple sports will have the opportunity to train indoors year-round.

“It literally is something that will be used every day of the year, whether it’s for practice, conditioning, recruiting events, university events, opportunities for our other teams to practice here in inclement weather,” McCaw said.

Of particular interest to Flames fans is a welcoming plaza outside the University Boulevard entrance that will host tailgate parties and other pregame activities. Recruiting dinners and other banquets and special functions will be held on the turf inside.

The facility is the latest in a number of campus improvements for Liberty’s athletics programs, following Liberty’s Indoor Track Complex, which was dedicated at a grand opening ceremony on Jan. 28, and before the new Academic and Performance Center and Liberty Natatorium open this fall.