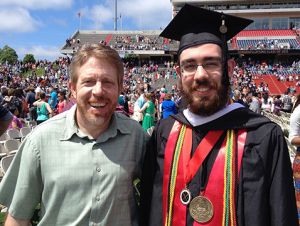 Doug Stephens IV entered Liberty as a National Merit Scholar in 2012 and continued to shine academically throughout his undergraduate studies in English. He was part of a three-time Big South Quiz Bowl Championship-winning team and competed in two national championship tournaments, in addition to being an honors student, a member of the Sigma Tau Delta English Honor Society, and a student consultant for Liberty’s Quality Enhancement Plan Committee, which plays a key role in Liberty’s regional accreditation.

“My honors courses were, without exception, challenging in new and often unexpected ways and forced me to expand my skill set in response,” Stephens said. “Furthermore, the experience of writing a senior honors thesis concluded my time at LU with a deeply researched and argued sample of scholarship that I was able to add to my (cover letter) — a true feather in my cap as I moved into graduate school.”

Stephens went on to earn an M.A. in English at James Madison University, and this semester started his Juris Doctor at Harvard Law School (HLS).

“The fact that I have been admitted to the Class of 2020 at HLS is testimony that I am as well prepared for the rigors of this program as any other student here,” he said. “It is irrefutable proof that a degree from Liberty allows students to perform at the highest levels with excellence.” 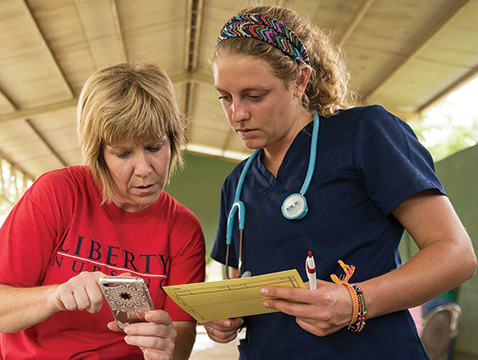 When recent Liberty nursing graduate Terrill Zentmeyer (’17) first chose her student honors thesis, she had no idea she would travel to Central America with her faculty mentor to carry out her research. In June, Zentmeyer and School of Nursing Associate Professor Dr. Kim Little flew to Guatemala with a team of Liberty nursing students and student-doctors from Liberty University College of Osteopathic Medicine. The group was there to conduct health clinics in rural villages with Hope of Life International. Zentmeyer and Little also had the opportunity to work with 40 households from two different villages to study the residents’ iron intake and determine whether they were malnourished or not.

“In high school, I had gone on a medical missions trip,” Zentmeyer said. “Since then, it has been one of my dreams to continue doing that, and I felt that this research was the best way to combine my major and my passion.”

Little served as Zentmeyer’s faculty chair. “There is a need for young people like Terrill who have a love for service and want to help in third-world countries,” she said. “I am so glad to see that Liberty is Training Champions for Christ who want to be the hands and feet of Jesus.”

“During my time at Liberty, I found that one of the most important aspects of being in the honors program was the relationships I built, which furthered my education. I developed close friendships with other honors students and faculty, who pushed me to study harder and smarter. The honors students really do become close friends and help each other to succeed. In turn, this makes the level of learning rise because class discussions are deeper and all of the students come to class well prepared. The faculty that teaches honors classes are also open to talking with students and are very smart. They definitely push each student to do their best, but beyond that, they teach each student to think critically and to form well thought out opinions on the subject matter. One of the reasons I believe this is important is that a student will not be able to get into a good graduate school if he has not been given a solid undergraduate education. With that said, I believe, based on my time at Liberty, that the honors program has adequately prepared me for law school.”

“I wrote my honors thesis on the book of Daniel as a model for cultural relevancy. The thesis not only built my research and writing skills for my Master’s Degree but also has been a valuable tool for ministry. I’ve attempted to live out principles of excellence in community involvement, and it has opened many doors for evangelism in our community. God is doing great things! Thanks for being a part of shaping my ministry!”