After being commissioned to the rank of U.S. Army second lieutenant, Liberty University Army ROTC Class of 2019 graduate Kenneth Crow walked across the stage to receive his first salute on Friday at one of the many military-related events held during Liberty’s Commencement weekend. There to grant him the honor was his grandfather, SFC (Ret.) Vernon Crow, a Vietnam War veteran.

“It meant a lot,” Kenneth Crow said. “The military is in my blood. My family has 124 years enlisted service combined. I’ve got to keep it going.” Crow is the first member of his family to be commissioned.

In line with tradition, the salute was “purchased” for a silver dollar; an officer must earn each salute thereafter. The two then embraced as the crowd in the Center for Music and the Worship Arts, Concert Hall cheered. In the audience were his parents, Kenneth Sr. and Terri, along with his wife, Kristie, and three children. His parents and wife had the honor of pinning Crow’s newly earned rank to his crisp uniform.

With a twinkle of pride in his eye, Crow said, “Having my dad involved in the ceremony was extremely important — he taught me the ropes.” 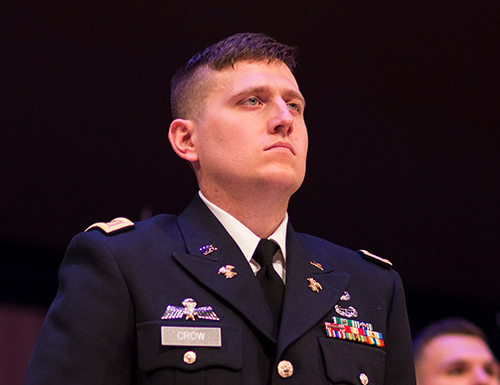 As an officer, and with a Liberty interdisciplinary studies degree, Crow will join the Quartermaster Corps.

Crow was one of 14 cadets from Liberty’s Reserve Officer Training Corps program to be commissioned on Friday. (There was also a commissioning ceremony for Air Force ROTC graduates.)

“We are a family, at the end of the day,” Hamilton said. “It means a lot. And my Liberty degree means a lot to me considering our school is such a testimony of Christ.”

As part of its 46th Commencement Exercises, Liberty held events throughout the day on Friday to show appreciation to its military community — the men and women who actively serve or have served, as well as their spouses who support our heroes. More than 6,000 members of the Class of 2019 have military ties.

In the morning, Liberty held a Military Spouse Graduate Recognition Ceremony, where spouses of service members and veterans who were completing a degree were honored with a special challenge coin for their personal accomplishment and sacrifice in supporting their military families.

Following the Baccalaureate Service, members of each branch of the military joined together for Liberty’s annual Military Graduate Recognition Ceremony. In addition to powerful, patriotic music, the graduates were challenged by U.S. Air Force Chaplain Col. (Ret.) Dr. Steven Keith, director of Liberty’s Center for Chaplaincy in the Rawlings School of Divinity.

In his message, Keith told the graduates to recognize how quickly life passes by and, with that in mind, to live their lives in service to the ultimate Commander in Chief — Jesus Christ.

The graduates were also presented with a special commemorative coin, featuring a graduation cap, Bible, and American flag on one side and the university’s mark on the other. The coins were handed to the graduates by Liberty faculty and administrators who had dedicated their careers to military service. Each graduate was also given a copy of “Grateful American” by actor and veteran activist Gary Sinise.

After receiving their coins in a firm handshake and a few words of encouragement, the graduates, shoulders squared and eyes fixed ahead, filed back to their families and loved ones awaiting them. There was a glow of pride filling the room — these men and women were ready to serve with honor and to pursue their careers with confidence and excellence.

Liberty has built a community of thousands of service members, veterans, and military spouses, many of whom study through its online degree programs while based around the world.

The university was ranked the No. 1 “Best for Vets” school by Military Times for 2019 and designated a Top 10 Military Friendly School on the 2019-20 list of “Better for Veterans” institutions.