Alumna conducts research on addiction for National Institutes of Health 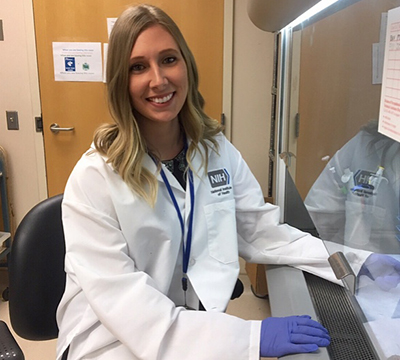 Psychoneuroendocrinology and Neuropsychopharmacology aren’t everyday terms to most people. But for Liberty University alumna Brittney Browning (’18), they are a part of her daily vocabulary.

Browning graduated with her Bachelor of Science in Psychology from Liberty and now works as a post-baccalaureate fellow at the National Institutes of Health (NIH) in Bethesda, Md.

“Our lab investigates different neuroendocrine pathways as potential pharmacological targets to treat addiction,” Browning said. “Basically, we study different parts of the brain to help create medications and treatments that may be used to help treat addiction.”

Browning said she finds it “extremely rewarding” to know that her work is making a difference.

“I love the environment of NIH,” Browning said. “At Liberty, I dreamed of working at NIH because I read numerous papers that were published from here. Working in a place that is so research-focused has given me a new appreciation for the hard work and time that goes into papers that are published from clinical trials.”

Browning said she felt well prepared for her position at the NIH after gaining extensive research experience as an undergraduate student. At Liberty, one of her main projects was investigating the effects of binge sugar consumption in adolescent and adult rats.

Browning spent the summer before her senior year interning at a cognitive neuroscience summer program in Amsterdam. When she returned to Liberty, she received a position as an undergraduate research assistant at Liberty University College of Osteopathic Medicine (LUCOM), where she participated in a number of research projects on nutrition, food science, and the influence of diet on health in mice. She was given a travel award by the university’s Center for Research & Scholarship to present her findings at the Experimental Biology Conference in San Diego, Calif. 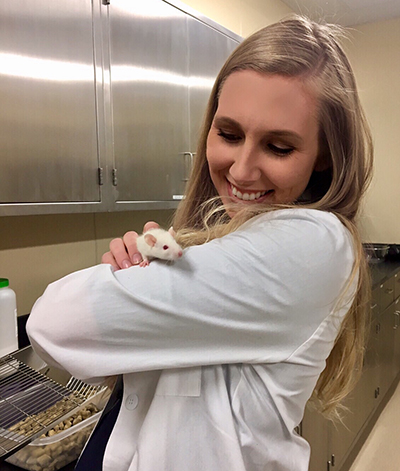 The undergraduate research gave her invaluable skill sets that have helped her succeed at her job. She said the psychology department, as well as the biology & chemistry department, “did a phenomenal job teaching scientific writing, which has helped tremendously in preparing manuscripts for publication.”

Browning is also grateful for the support of Dr. Joseph C. Gigliotti, assistant professor of physiology in LUCOM’s Department of Integrative Physiology & Pharmacology.

“His support and direction played a huge role in my undergraduate experience,” Browning said. “In addition to teaching me key research skills, he went above and beyond to help me in any way that he could. Professors like Dr. Gigliotti are what set Liberty apart. Because of Liberty, I now have lifelong friends and mentors.”

Dr. Gigliotti’s laboratory has focused on understanding kidney disease and how diet influences kidney and cardiovascular health. He is also involved in collaborative projects studying kidney health and disease with the University of Rochester Medical Center and the University of Virginia School of Medicine. Browning completed her senior research project in Dr. Gigliotti’s laboratory, where she studied the influence of different diets on alcohol consumption and gene expression in mice.

“Browning had a wonderful way of combining competence with grace and humility,” Gigliotti said. “She is very intelligent, motivated, and hardworking — characteristics that have served her well thus far and will continue to do so as she progresses through her career.”