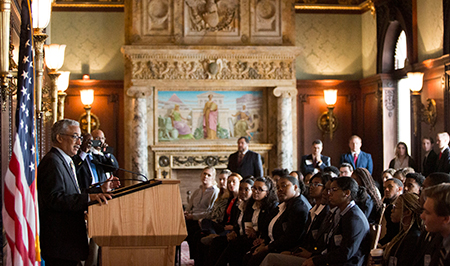 A group of about 100 Liberty University students headed to the nation’s capital on Tuesday to participate in the Washington (D.C.) Symposium — an afternoon at the Library of Congress jointly hosted by Liberty and Hampton University. While Liberty’s Center for Law & Government has hosted similar programs in the past in conjunction with the Washington Fellowship program (where students spend a semester interning in D.C.), this was the first time the event was open to all students and held in conjunction with Hampton University.

Upon arrival, Liberty students met with a group of their counterparts from the William R. Harvey Leadership Institute at Hampton University for lunch at the Capitol Visitor Center. They then joined students from the Washington Fellowship in the Members Room in the Jefferson Building of the Library of Congress to engage with influential leaders from the U.S. Congress and the White House. 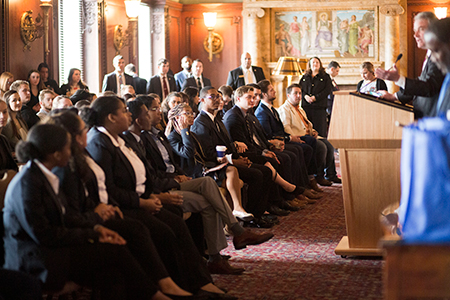 U.S. Rep. Bobby Scott (Va.-3), chairman of the House Committee on Education & Labor, then spoke to the group about issues currently before his committee that affect college students and institutions of higher education.

The next speaker was Ja’Ron Smith, who serves in the White House as special assistant to the president for legislative affairs. Smith talked about his path to public service and about his work on the successful passage of the First Step Act, the significant bipartisan criminal justice reform legislation that was signed into law by President Donald Trump in 2018.

U.S. House of Representatives Minority Leader Kevin McCarthy (Calif.-23) then addressed the students, using examples of artwork in his office in the Capitol to talk about the principles upon which the United States was founded and must continue to be guided. McCarthy referred to paintings of Washington’s Crossing of the Delaware, Frederick Douglass, Abraham Lincoln, and Ronald Reagan in offering a salute to American perseverance and devotion to freedom throughout the generations. 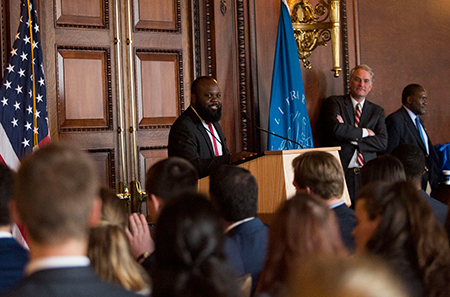 The program was rounded out by an informative presentation from Hampton University alumna Jamesa Moone Hunter, who works with the Office of the U.S. Trade Representative, and Shelva Nobles of the Pension Benefit Guaranty Corporation.

The speakers then answered questions from students.

“Being able to interact with such influential officials like Congressman Bobby Scott and Leader Kevin McCarthy is an opportunity many students at other universities do not get to take advantage of,” said Tim Murcek, a junior at Liberty. “When Liberty sponsors events like this, it provides students important extracurricular experiences, which enrich and shape their college careers.”

At the conclusion of the Symposium, the students walked across the street for an after-hours tour of the U.S. Capitol that included a visit to Statuary Hall, the Capitol Rotunda, and the Speaker’s Balcony. 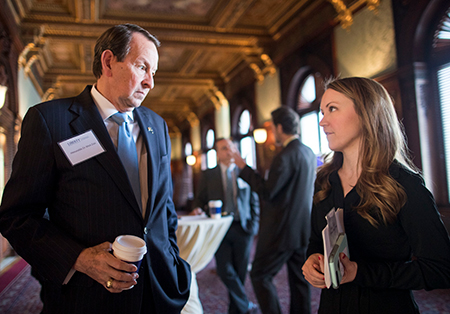 Also on Tuesday, Liberty officials visited with key policymakers from the U.S. Department of Education and congress. In what has become an annual event, the university hosted a breakfast reception in the Members Room at the Library of Congress.

During the breakfast, Liberty officials took the opportunity to update policy makers on the exciting growth taking place at the university and to engage with them about important higher education policy that is being supported by Liberty.

Guests included Congressman Scott; Deputy Secretary of Education Dr. Mick Zais and his Senior Advisor Kent Talbert; and U.S. Sen. Tim Kaine (D-Va.), who sits on the Senate Health, Education, Labor and Pensions Committee (HELP). The reception also welcomed several other members of congress and staff members, including U.S. Reps. Morgan Griffith (Va.-9) and Ben Cline (Va.-6) from the Virginia delegation. Liberty leaders who addressed the guests included Vice President of Student Financial Services Ashley Reich, Director of Government Affairs Kenny Craig, as well as deans and representatives from the School of Law, Liberty University College of Osteopathic Medicine, the Helms School of Government, the School of Business, and the School of Engineering. Several Liberty student leaders who were part of the Washington Symposium also attended the breakfast. 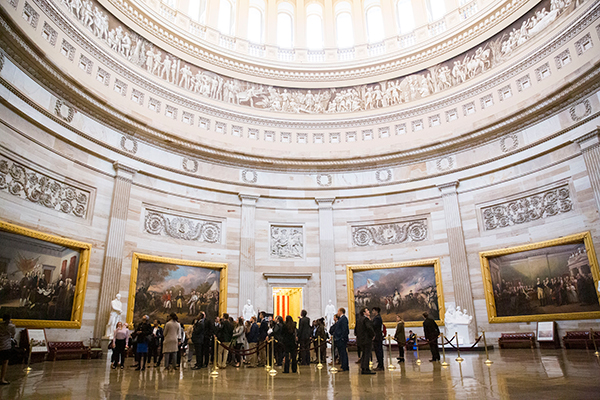