Liberty hosts NFL chaplains to recharge and support their ministry

Chaplains for the National Football League are holding their annual meeting on Liberty University’s campus this week, led by Athletes in Action. The ministers are not only gathering together for a time of encouragement and spiritual renewal, but they are also taking time to inspire the campus community. Among the attendees is Phillip Kelley, a Liberty alumnus who serves as the pro operations manager for Athletes in Action and has served as the Kansas City Chiefs chaplain for five years (read more about Kelley in the Liberty Journal). 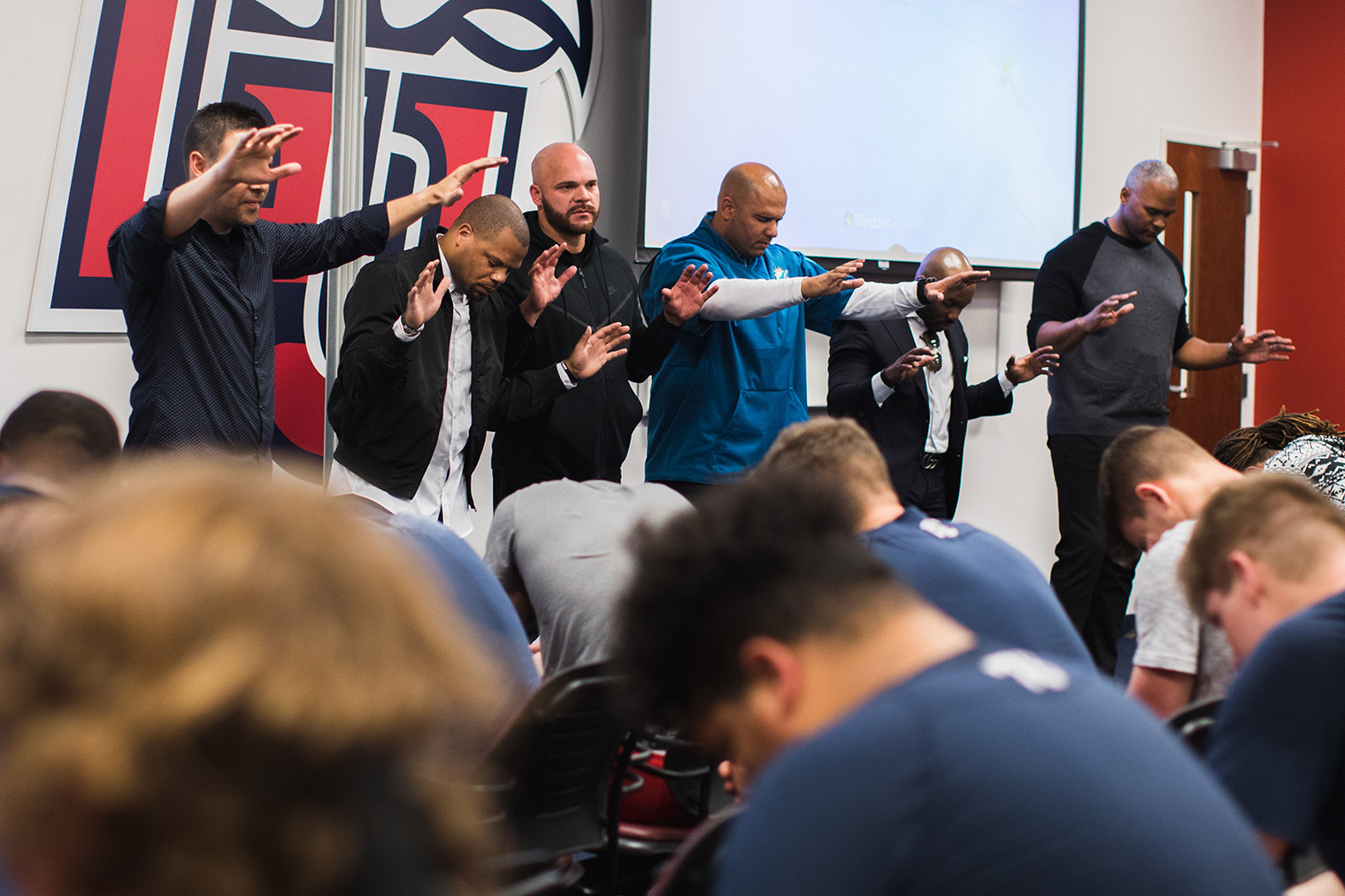 The group includes 17 chaplains representing the Baltimore Ravens, Chicago Bears, Cincinnati Bengals, Cleveland Browns, Houston Texans, Jacksonville Jaguars, Los Angeles Chargers, Miami Dolphins, New York Giants (from which Liberty alumnus Rashad Jennings recently retired), Pittsburgh Steelers, and Tampa Bay Buccaneers. A number of their wives, many of whom minister to the partners of the players, also came to campus for their own sessions.

As a university that seeks to equip world changers to influence every corner of society for Christ, Liberty’s hosting the chaplains was intentional. In addition to providing its world class facilities for their uplifting sessions, Liberty has partnered with Athletes in Action to offer scholarships to NFL chaplains and players, as well as player spouses and children. Professional athletic careers are demanding, and Liberty’s online education program offers flexibility so that professionals don’t have to sacrifice their schedule for a quality education. (Super Bowl MVP and Philadelphia Eagles quarterback Nick Foles takes online graduate degree courses through Liberty.) 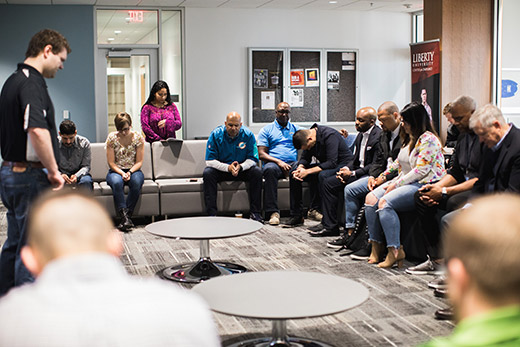 On Tuesday morning the chaplains held a prayer session with Rawlings School of Divinity students before spending an hour in the afternoon ministering to Flames Football players, coaches, and staff.

“These are the folks who are behind the scenes doing great, great work,” Anthony said of the chaplains. “They are like stealth bombers. They fly into that locker room under the radar but they do a lot of damage for God’s Kingdom.”

McGovern described the immense pressure that players operate under, including facing career-ending injuries. So, while people may put pro athletes on a pedestal, he reminded the crowd that they need Jesus just like the rest of us. 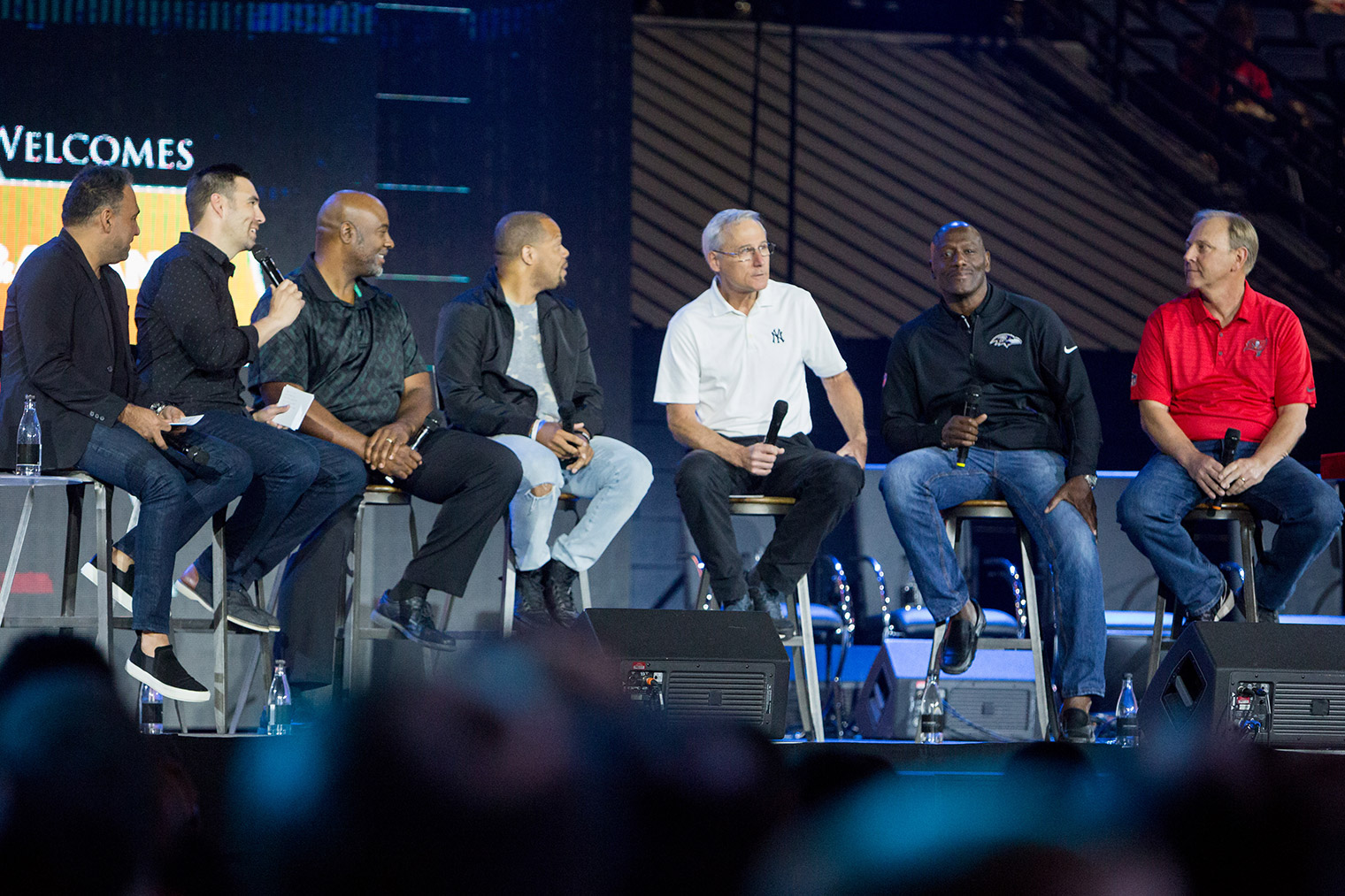 “If a guy has that foundation (Jesus) in his life, no matter how much money he is guaranteed, no matter how successful (he is) and how well his name becomes recognized, if he doesn’t have that foundation of a relationship with Jesus Christ, then when those winds and storms of adversity come, he will not be able to withstand them,” McGovern said.

Shelton explained the importance of a community in a chaplain’s life — both with fellow ministers and the athletes they serve.

“When you build relationships, it’s going to manifest something that will last a lifetime,” he said. “It doesn’t matter what team you are on; we are all on God’s team.”

Relating to the students as an alumnus, Kelley told the Convocation crowd to use authenticity to build bridges to connect with others rather than pride to build walls of separation. He encouraged them to cherish their time at Liberty.

“Like it or not, when you get out of here, there is going to be an exam,” Kelley said, challenging them to stand firm in Christ. “You get life thrown on you. And are you going to have that foundational aspect of your life to be able to withstand some of those storms?”