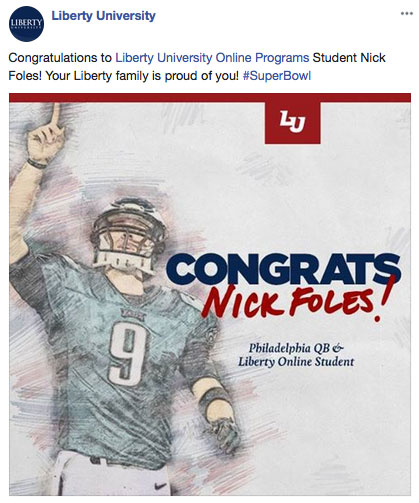 UPDATE: Philadelphia Eagles quarterback Nick Foles, who is taking graduate courses through Liberty’s online education program at the Rawlings School of Divinity, was named the Super Bowl LII MVP after leading the Eagles to a 41-33 win over the New England Patriots.

The recently opened Freedom Tower on campus, which houses the School of Divinity, was lit up in green Sunday night and will stay green at night for the rest of the week in honor of Foles and his dedication to living out his faith during his football career.

Liberty congratulated Foles on the university’s official social media accounts, with fellow students, faculty, staff, and even parents chiming in with their own congratulations. President Jerry Falwell was one of the first to share his support: 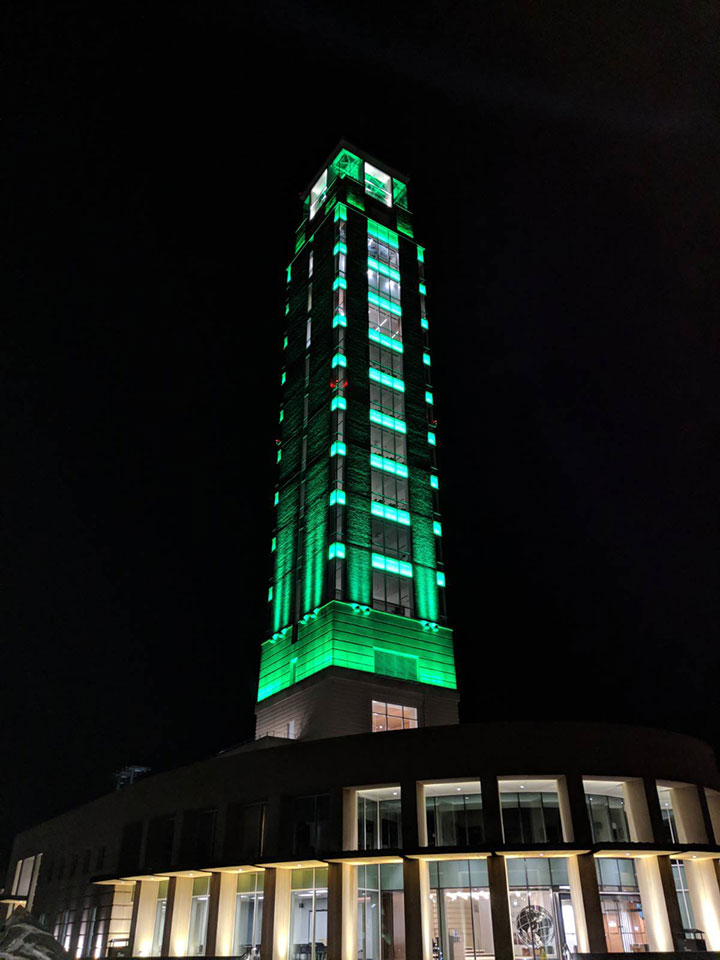 Some joked about his class duties. Tim Dolan’s post reads: “Congratulations, Nick. Celebrate quickly, I think you have an article critique due by 11:59.” (Foles actually started courses last offseason, but didn’t take courses during the season.)

Foles has been bold about his faith during his football career, indicating that he would like to be a youth pastor someday. As the Eagles were presented with the Vince Lombardi Trophy, Foles held his infant daughter, Lily, and said, “Being here with my daughter, my wife, my teammmates, my city, we’re very blessed.” At the post-game press conference, he said God gets the glory. “I wouldn’t be out here without God, without Jesus in my life. I can tell you that, first and foremost in my life, I don’t have the strength to come out here and play a game like that. It’s an everyday walk.”

While Liberty University students gather to watch the Super Bowl on Sunday, many of them — no matter which team they’re rooting for — are eager to watch one of their own take to the field. 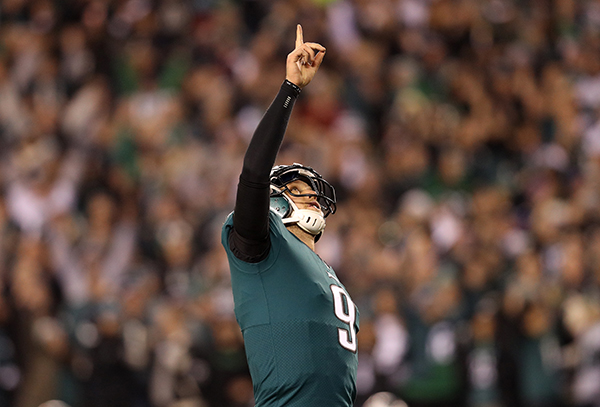 The 29-year-old spent last offseason at his home in Southern California, where he could take advantage of the flexibility and convenience of Liberty’s online education. He has indicated he will pick up his courseload once again this coming offseason.

Foles is in the sixth season of his NFL career, but he has been open about his alternate career plans, telling reporters that he might like to be a high school pastor.

“When you’re playing in the NFL, you can only do this for a short amount of time,” he told the Philadelphia Inquirer. “Guys retire before they’re 30. If you play forever, you play into your 40s — and you’re still a young man with a lot of life left to live. … That’s what I’ve enjoyed in the offseason, being able to take classes, do that. It makes it easy to go play.”

Foles has also been bold about living out his faith. His Twitter bio reads, “Believer in Jesus Christ, husband, father, son, brother.” In a press conference on Thursday, he shared about the deciding moment — to sign with the Eagles and not retire.

“I knew as a person, the more growth I would have and the more opportunity I would have to glorify God and trust in Him was to go back and play football … because of everything I had encountered,” he said. “It took a lot more faith to go back and play than if it would have gone the other direction, but either way would have been fine. I know I would have trusted in God. He gave me the strength to go through those moments — through prayer, through studying the Word, through my relationship with my wife and family, I wouldn’t be up here without them, without God in my life. Every time I speak and every time I play the game, it’s to glorify Him.”

Foles also talked about the relationship with his offensive coordinator Frank Reich, who had been in a similar role as a backup quarterback headed to his first Super Bowl and who had also been to seminary and become a pastor.

For now, energy is high on Liberty’s campus as students share their excitement at the chance to see Foles perform. Junior Nick Booth is one of Foles’ fellow students who will be cheering him on.

“As an Eagles fan, it’s been amazing to see how Nick Foles has been able to perform and improve,” he said. “I’m excited to have him as the Eagles’ quarterback in the Super Bowl, and it’s cool to know that the quarterback on my team is a student here like me.”

Liberty has another connection to this weekend’s big game. Alumna Sam Ponder (’09) will be covering the Super Bowl for ESPN. Ponder is host of ESPN’s “Sunday NFL Countdown.”