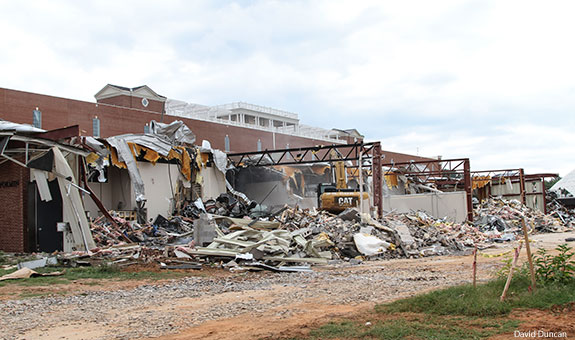 Liberty University began tearing down the last of the old academic buildings behind DeMoss Hall this week. The former science and performing arts halls were built during the late 1970s and early ’80s and up until last semester, students studied, performed, and conducted research within their walls. Now, as Liberty continues its $500 million campus rebuilding, new structures are being erected that are designed to provide top-notch learning environments for students for years, decades, and even centuries to come.

Following the demolition, Liberty will begin work on the Student Center — a three-story, 140,000-square-foot addition to DeMoss Hall. Two new academic buildings are also being constructed nearby, adjacent to the Jerry Falwell Library — a four-story, 121,000-square-foot Science Hall and the Center for Music and the Worship Arts, which includes a 140,000-square-foot educational wing and a 1,600-seat fine arts auditorium. These will be part of Liberty’s Academic Commons.

Dr. Stephen P. Kerr (’82), director of bands, was a student at Liberty when the Performing Arts Hall was constructed and has just begun his 25th year of teaching at Liberty, with countless hours spent impacting lives in the building. As a student, Kerr remembers kneeling in the mud under the building’s unfinished structure to pray for it.

“This building truly has served its purpose,” he said. “Those who prayed over and invested in this building, those who have taught within its walls, have realized how the building itself has served its purpose. It is not really so much about the building but what it gives us the opportunity to do — it gives us the opportunity to teach and to create great memories and relationships with others so that we might grow together and prepare people for … what the Lord has called them to do.”

Kerr said that, just like the old buildings, the new ones at Liberty are being prayed over and invested in.

When Liberty alumnus Wayne Gray (’89) heard that the Performing Arts Hall was coming down, the Floridian promptly planned a stop in Lynchburg to visit it one last time. In the past decade, Gray has only been able to visit Liberty a couple of times and it had been years since he last came to Lynchburg. He arrived on Aug. 3 and toured campus with President Jerry Falwell, his wife Becki Falwell, and son Trey, the next day.

“I had to make a trip down here,” Gray said, “to see (the building) one last time before they tear it down. I spent the vast majority of my college career in that building.”

Gray majored in theater and participated in a number of plays, which at that time were held in the performing arts building. He was also a member of the drama ministry team The King’s Players.

After graduating, he acted for several years, including performing in “Shear Madness” at the John F. Kennedy Center for the Performing Arts in Washington, D.C. He now invests in real estate with his wife and travels the country speaking on the subject.

Gray visited the Performing Arts Hall on his own the night of his arrival and spent about an hour reminiscing.

“So many names of people I haven’t thought about in years kept coming to mind, people who had a big influence in my life. It was overwhelming … some of the best memories of my life were here at Liberty.”

As a student, he remembers Liberty founder Dr. Jerry Falwell — as he often did — sharing his dream for what Liberty would one day become.

“I can remember, in those first chapel services back then, him talking about the fact that this would one day be the Notre Dame for evangelical young people,” Gray said. “We never could have pictured this … that is where Liberty is at now.”

Though for many, like Kerr and Gray, it is bittersweet to see a building so full of memories torn down, Gray said it is necessary for progress.

“(Visiting campus after all these years), it is mind-boggling. It is not the same place in the sense that structurally everything is different,” he said. “Liberty needed to develop to where it is now and I am just so proud of the fact that it has thrived over the years. It is definitely a place I want to send my children; there is no doubt about that.”

After walking around the old building with the Falwells, Gray went to see Tower Theater, Liberty’s stage for Broadway-caliber productions, for the first time. He said he was blown away.