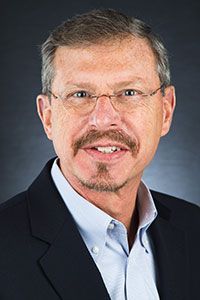 He studied with principal trumpet for the Roanoke Symphony, Alan Bachelder, and Dr. Edward Bach, trumpet instructor at the University of North Carolina at Greensboro. Dr. Kerr studied conducting with Dr. James Glazebrook at Virginia Polytechnic Institute and State University, and Dr. John Locke at the University of North Carolina at Greensboro. He periodically serves as a band clinician and adjudicator in the mid-Atlantic region. Dr. Kerr is an active member of the College Band Directors National Association, The National Band Association, The Conductors Guild, The World Association for Symphonic Bands and Ensembles, and the National Association for Music Education.

Professor Kerr has been selected by Who’s Who Among America’s Teachers for consecutive editions since 2000. He won the LU Faculty Recruiter of the Year award in 2001 and the Servant’s Heart Award in 1998. He has produced sixteen albums with the LU Wind Symphony, 15 Marching Band recordings, and 10 albums with the Jazz Ensemble. The Liberty University Wind Symphony has most recently recorded “Passion of the Dance” (2018), “Monuments & Cathedrals” (2017), “Wine Dark Sea” (2016), “Song of the Phoenix” (2015), and “Frozen Cathedral” (2014).

The Liberty University Wind Symphony has demonstrated acclaimed performance levels, including performing at the 2008, 2012, and 2016 College Band Directors National Association Southern Division Conferences, by peer-reviewed invitation. Under Dr. Kerr’s direction, the Liberty University Wind Symphony has toured from Maine to Miami, and as far west as St. Louis, MO. Dr. Kerr also performs periodically in the Lynchburg area and weekly as principal trumpet for the Thomas Road Baptist Church Orchestra.