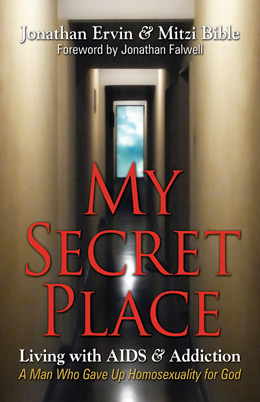 Liberty University Press has recently released “My Secret Place: Living with AIDS & Addiction — A Man Who Gave Up Homosexuality for God,” by Jonathan Ervin and Mitzi Bible; Foreword by Jonathan Falwell.

Proceeds are being donated to Liberty University to build a performing arts center, now under construction at Campus North.

“My Secret Place” explores the issue of homosexuality within a Christian worldview. Bible, a writer and editor with the University Advancement office at Liberty University, tells the life story of Liberty alumnus Jonathan Ervin, who was the subject of an article she wrote in the July/August 2008 Liberty Journal.

Bible and Ervin will be signing copies of the book at both services at Thomas Road Baptist Church in Lynchburg, Va., this Sunday. “My Secret Place” is also available for purchase at Amazon.com and other online retailers, and at the Liberty University Barnes and Noble Bookstore, the TRBC bookstore, and most bookstores across the country.

As a preacher’s son at Dr. Jerry Falwell’s conservative Liberty University in the 1980s, Jonathan Ervin wanted to impact lives. With a natural gift of song, he seemed poised for a career in Christian music. But God simply wouldn’t allow that to happen, Jonathan says more than 20 years later. That’s because he was living a lifestyle God would not honor, keeping a secret from family, friends, coworkers, church members and even his own son for many years. That was, until God’s call on his life got too strong to ignore.

In front of thousands at Falwell’s Thomas Road Baptist Church, Jonathan confessed to a life of sexual immorality and announced he had AIDS. As the disease wreaked havoc on his immune system, he made a solid commitment to lead a life pleasing to God — and that’s when he received the biggest blessing of his life: life itself. As medical tests showed his condition was deteriorating, he was soon being called “a walking miracle.” His health was extraordinary for a man in the critical stages of AIDS; he could work full time, exercise on his treadmill and take trips across the country. Living his last days on Earth, he was singing praises to God once again, with a renewed hope in a God who had completely renovated his life.

Liberty University Press was established in the fall of 2008 and has published three other books to date:

— “Play Your Hand Well: A Nutritional Approach to Wellness So You Can Live a Healthier Life Now!” by Dr. Joseph A. Mix, a Health Sciences and Kinesiology professor at Liberty University.
— “Reward: Collecting Millions for Reporting Tax Evasion, Your Complete Guide to the IRS Whistleblower Reward Program,” by Joel D. Hesch, Assistant Professor of Law at Liberty University School of Law.
— “Journey,” with leader’s guide and student workbook, by Max Mills, a Lynchburg, Va., resident and LU graduate with a background in pastoring, counseling and teaching.