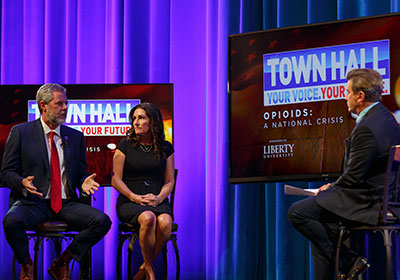 The event, “Your Voice. Your Future. Opioids: A National Crisis” was sponsored by Liberty University and Sinclair Broadcast Group. It is one of several scheduled to take place around the country. The first town hall kicked off at Liberty on Nov. 28 with First Lady Melania Trump, U.S. Secretary of Homeland Security Kirstjen Nielsen, and U.S. Secretary of Health and Human Services Alex Azar II. Bolling lost his son, Eric Chase, to an accidental opioids overdose in 2017 and is using his media platform to help join forces to fight the epidemic.

The Falwells were part of a panel of guests that ranged from local law enforcement and state government officials to those involved in the treatment and recovery of addicts.

Becki Falwell shared a story about a baby who was born addicted to heroin after her mother used drugs during pregnancy. The mother continued using drugs and the child was eventually taken out of the home. (The first lady has been outspoken about helping newborns with neonatal abstinence syndrome, a condition that afflicts babies exposed to opioids in the womb.)

She said that in order to lift the stigma around addiction, people must start talking about it. 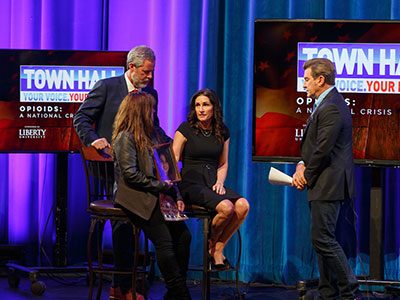 “It’s a medical condition,” Becki Falwell said. “Most people become addicted because they got hurt and were prescribed painkillers by a doctor first. It’s nothing to be embarrassed about.”

President Falwell said Liberty has been intentional in offering students a wide range of positive recreational activities and creating an environment where students don’t fear rebuke for seeking help. He said first responders on campus have access to Narcan, a medication used to reverse a potentially fatal overdose.

When asked by Bolling if having a ready supply of Narcan just enables opioids abuse, President Falwell disagreed and said it is ultimately about saving a life.

“We have always believed that Christianity is about forgiveness,” Jerry Falwell said. “That’s what we try to do at Liberty University. If someone has that addiction stigma in their past, I think it’s our job to give them a second chance, third chance, or fourth chance.”

Charleston Southern President Dondi Costin, a Liberty alumnus, was overseas and could not be present at the event but recorded an interview. He thanked the Falwells and Liberty for sponsoring the event and helping to fight the epidemic.

“The opioid crisis can affect anybody,” Costin said. “Liberty has been a leader since Dr. Jerry Falwell founded the university in 1971. Any way that we can partner with the great things Liberty University is doing, makes us excited. One of us is never going to be as strong as all of us.”

“(Fighting) the opioid crisis speaks to learning, leadership, and service,” he added. “We want to make awareness of this issue larger, larger, and larger so that we can raise the stakes for universities, churches, and individuals.”

Liberty will sponsor three more town halls with Baltimore-affiliate WBFF on March 14 (addressing what U.S. cities and towns are doing to combat the crisis), with West Palm Beach-affiliate WPEC on March 27 (discussing the gateway for drugs and entry into the U.S.), and Little Rock-affiliate KATV on April 16 (on the prevention and solutions to the crisis).