Melania Trump, first lady of the United States, took the Convocation stage at Liberty University on Wednesday as part of a town hall event addressing the national opioid epidemic. The event was filmed for the pilot episode of “America,” hosted by former Fox News host Eric Bolling, who lost his son to an accidental opioid overdose last year. The program is scheduled to air nationally on Sinclair Broadcast Group stations on Wednesday night. [Watch the event locally at 7 p.m. on WSET.]

In her first visit to Liberty, Mrs. Trump told students in her opening remarks: “I believe in the power of all of you. If even one of you leaves here today and talks to a friend or family member about the potential to end this crisis, then we have succeeded.”

She said that the students, as our next generation, “have the potential to not just reduce, but eliminate the statistics.”

“I also believe you have the capacity to not think of this in terms of statistics, but to think of this as a human story and an opportunity to save lives,” she continued. “I believe in your unending potential to change our world for the better.” 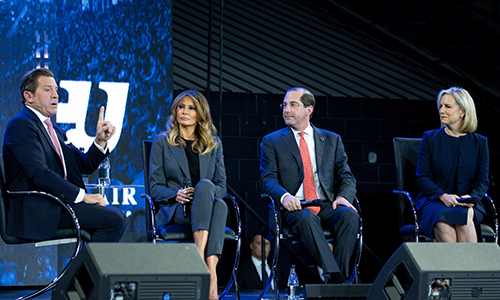 Ending opioid abuse is one of the three pillars of the first lady’s BE BEST initiative. The Trump Administration has worked to make sweeping changes to regulations concerning opioid abuse, declaring the crisis a nationwide Public Health Emergency.

Across the nation, untold millions suffer from addiction. In 2017, more than 72,000 died from overdoses, with the majority being from opioids.

Azar explained how easy it is to become addicted, with the majority of addictions starting with legally prescribed painkillers. He said the addiction “is not a moral failing; it is a medical issue that can be solved by medical treatment.” Since January 2017, legal opioid prescriptions have dropped 23 percent.

Nielsen shared how efforts are ramping up to stop the influx of illicit opioids from outside the U.S. — at land borders, at sea, and in the mail. 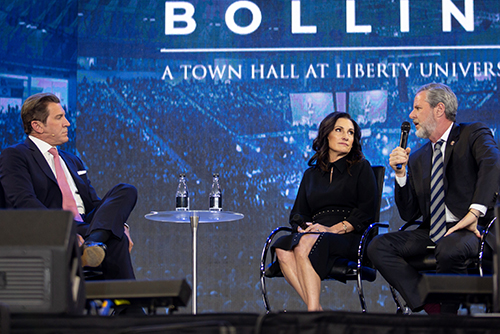 Students asked how parents can talk to their children about the issue, how to help friends seek treatment, and how the government can support faith-based organizations in the fight.

Junior Derek Rockey had the “incredible” chance to address the panel.

“To see their hearts today — especially Melania’s, to be so real with us, how she started talking about her son Barron and having real conversations with him — is special,” he said. “It showed me these guys really care about helping people.”

Liberty President Jerry Falwell and his wife, Becki, joined the discussion with Bolling, explaining how they ran into the TV host at an event in New York and learned how passionate he was about discussing the issue for a national audience and offered Liberty as a perfect venue for his show.

The Falwells shared how proactive Liberty’s campus is in creating an environment where students feel safe and supported, and where there are so many recreational activities for them.

Becki Falwell said the difference at Liberty is that faculty, staff, and students are “more like a family.”

“You have to create an atmosphere where drug use is discouraged, not encouraged,” President Falwell added. “There has to be peer pressure in the right direction.” 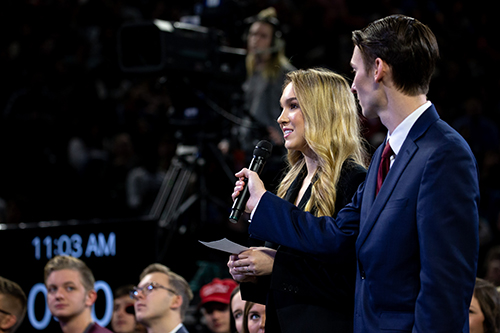 As a mother, Becki Falwell reminded the students that their parents love them and told them to never feel shame or fear the consequences if they need help.

“Your parents would rather have you for the rest of their lives,” she said.

She asked the crowd to continue to pray for Bolling and his family.

Before the town hall event began, Liberty alumnus Rick Amato shared his story of battling and overcoming addiction. Amato has led a “War on Addiction,” speaking to more than a million young people around the world.

Diana Hart, mother of singer/songwriter Demi Lovato, was also scheduled to be part of the event, but was unable to attend due to a last-minute conflict. She sent her apologies and intends to be involved in future panel discussions, Bolling said. 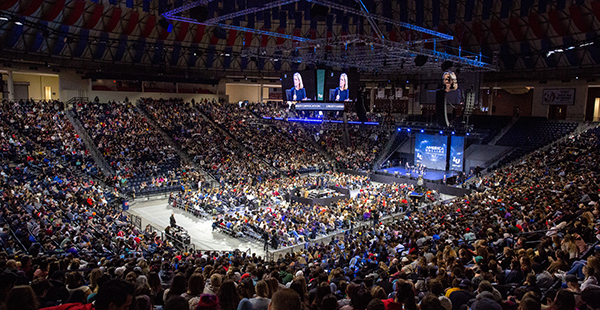 Morning classes at Liberty were canceled to give students time to get to the event and through heightened security. Junior Taylor Redd said hosting the event on campus shows that the university “cares about bigger issues.”

“We had a great platform to share the Gospel and pray for people,” she said. “Seeing that our leaders care enough to get students help … and to encourage us to help people around us, that just shows the heart behind our school and what we can do.”

Anyone battling addiction is encouraged to call 800 662 HELP (4357). At Liberty, students can reach out to Student Counseling Services or an LU Shepherd for support.