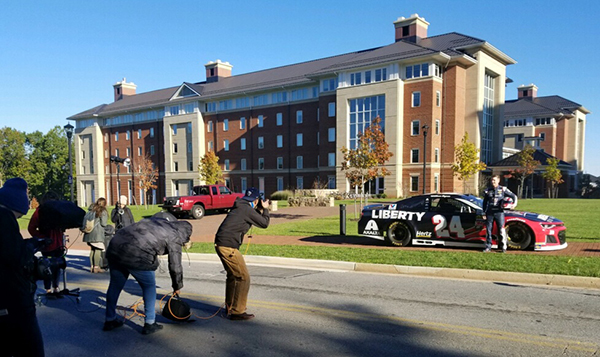 Meeting students and doing some marketing photographs and videos around campus, Byron was struck by how much Liberty has changed since he was a freshman residential student in Fall 2016.

“It’s grown a lot — it’s crazy,” said Byron, who is pursuing a degree in business communication. “It seems like the campus is more lively and brighter even than when I was here. … That’s really cool to see.”

Byron, 20, has posted three top-10 finishes in 32 starts this season, and is looking to close out 2018 with a couple more in the final four races.

“It’s been challenging,” Byron said. “We’ve had some parts failures and we’ve had some unfortunate crashes and things that maybe were self-inflicted and some maybe that weren’t. … It’s been a difficult road in that aspect, but outside of that, there’s been a lot of things that I have learned.” 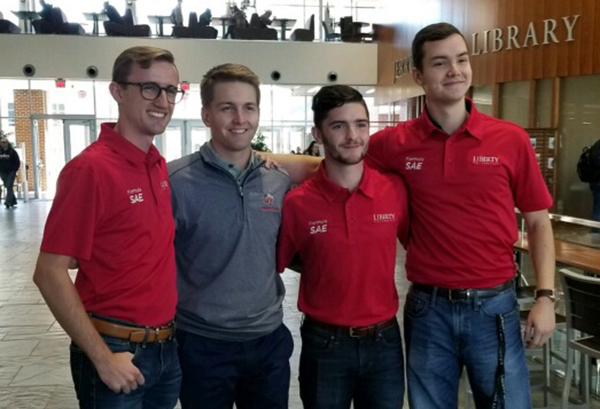 Byron is on the verge of receiving NASCAR Cup Series Rookie of the Year honors, as he currently leads Bubba Wallace by 109 in the points standings, ranking 22nd overall.

“It would be really special to win that,” Byron said. “Hopefully, we can lock that up soon.”

Martinsville holds special significance for him as it was where his father, Bill Byron, took him to his first NASCAR race at the age of 6. He placed 20th there in a snow-delayed STP 500 race on March 26.

“There’s a lot of (Liberty) students who are going to hopefully come, so I’m looking forward to that,” Byron said. “That will be really exciting. It’s part of the playoffs, so the intensity and the competition will be really high. It’s going to be a lot of fun to race in it and be a part of it. Hopefully, we can win the race.”

He is already gearing up for his second season on the Cup Series after learning this month that Chad Knaus has been designated as his team’s crew chief for 2019. Knaus was a member of the storied No. 24 Rainbow Warriors team from 1993 to 1998 with Jeff Gordon, the winningest Cup driver in NASCAR’s modern era, and proved to be an integral part of Gordon’s 1995 and 1997 titles. Knaus guided Jimmie Johnson to a record-tying seven championships since starting as his crew chief in 2002. 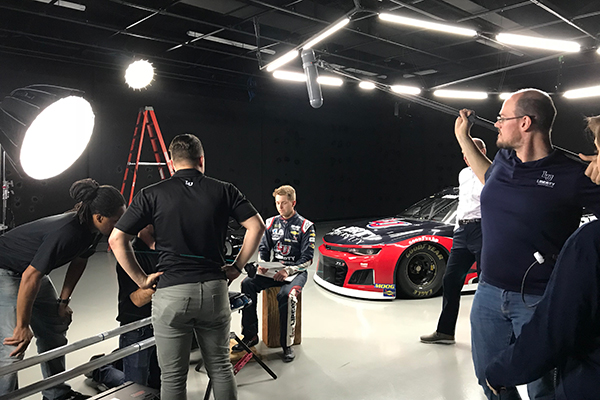 “Chad is really accomplished in the sport and he’s giving me all the tools to really develop and grow as a driver,” Byron said. “I am looking forward to working with him and as the offseason comes, we will get a head start on things.”

For now, Byron is fully focused on this weekend’s race in Martinsville, starting with pole qualifying Saturday at 4 p.m. and Sunday’s race at 2:30 p.m. Both will be broadcast and webcast live on NBCSN and the NBCSports Apps.

“I’m trying to just focus on finishing stronger,” Byron said. “I think we can really succeed in these next few races and see where we can go from there.”

Liberty students, faculty, and staff can purchase discounted tickets for a pre-race experience and reserved grandstand ticket package for $24.