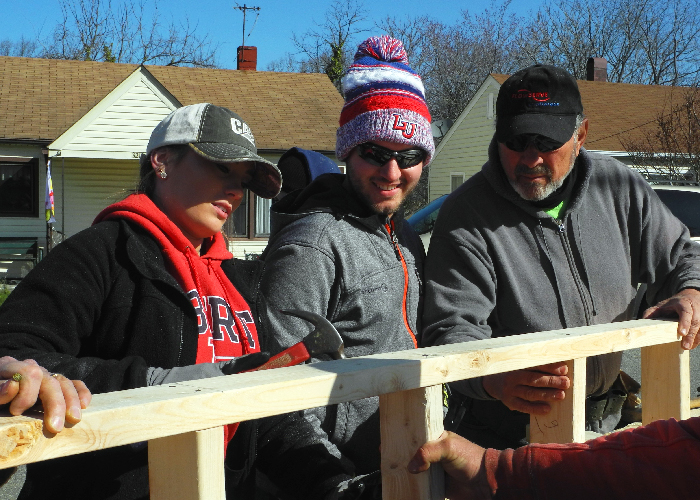 The Liberty University Habitat for Humanity Club recently received a $20,000 matching grant from State Farm to build a home in the Lynchburg area.

State Farm awarded several grants to college campus chapters around the country with Liberty’s club, along with clubs at Purdue University and Clemson University, receiving the largest awarded amount of $20,000.

“To be selected among schools like Clemson and Purdue shows that Liberty is very committed to the Habitat for Humanity program, and it was an honor to be chosen for this award,” said Alison Pettit, assistant professor and the club’s faculty advisor. “This grant is such a blessing because it generally takes around two years to raise $60,000 (the average cost of a Habitat project). This jump start to our fundraising goal will help us be able to build our third Liberty house within the next year.”

According to Pettit, Liberty was chosen because of the club’s fundraising success and their solid plan to raise matching grant funds. The club will have one year to raise $20,000 to match the State Farm grant.

Since the club’s creation in 2014, it has worked with the Greater Lynchburg Habitat for Humanity to build two homes; the most recent was finished in May for a single mother and her two children.

“God has certainly opened so many doors for our club over the past four years, and none of this would be possible without Him,” Pettit said.

Throughout the school year, the club hosts several fundraising events, including working concessions during football season as part of a partnership with Sodexo (Liberty’s dining services provider), bake sales, and an annual end-of-the-year gala.

To learn more about the club or how to get involved, visit Facebook.com/RaiseTheRoofForHabitat.