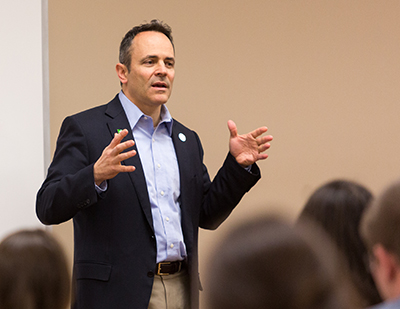 The pair, who made a number of stops throughout the community on Thursday, also took time to field questions ranging from education and justice reform to deregulation and limited government.

Gillespie explained that while there is a need for some regulation in order to protect the population, overregulation can snuff out new and smaller businesses, eliminating healthy competition in the marketplace.

Bevin shared how he kept a campaign promise to expunge the records of individuals convicted of certain felonies (non-violent, non-sexual) in order to give them a second chance. Gillespie said he believes in redemption and is considering policies to keep felons from relapsing and help them as they re-acclimate as productive members of society.

The visit was orchestrated in conjunction with Liberty’s new Center for Law & Government, led by former U.S. Rep. Robert Hurt. 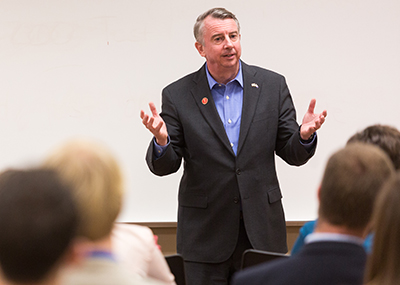 Gillespie introduced Bevin to the class, expressing how much he has learned from Bevin’s leadership as Kentucky’s 62nd governor (Bevin took office in 2015).

Recognizing the class members’ ambitions to work in roles influencing policy and government, Bevin challenged them to be “shepherds rather than sheep,” with the courage to lead when people grow complacent.

“The death knell of anything of significance is apathy,” Bevin said. “Nations rise and fall due to external conflict. … But cultures and civilizations crumble from within. … Ours is a nation that is becoming increasingly apathetic.”

Bevin said that everyone has a platform on which they can stand for what is right, and added that no matter how big or small each student’s platform is, they need to be ready to lead when the opportunity rises.

“Are you going to be in a position to be a person who is worthy of what is called of them?” Bevin asked. “I am challenging you, please be such a people. … If you know that this is the right thing to do — if 100 people are telling you to zig and you know that zagging is the right thing to do, be a ‘zagger.’ Some portion of that 100 want to be zaggers, but they don’t have spine enough to do it. Be bold … know what you believe and why you believe it, what are your values, and what is worth fighting for.”

Only a few days after speaking at Liberty's Convocation, Gillespie expressed his appreciation for Liberty and what it has done for the Commonwealth.

“I am always glad to be on Liberty’s campus, it is an incredible university,” he said, adding that he wants all of Virginia to emulate “the dynamic environment that you are in here at Liberty, where you are responding to the marketplace.”

“(The Center for Law & Government) is just one more example of the dynamic leadership here at Liberty,” Gillespie said.

As he is seeking the Commonwealth’s highest office, Gillespie explained the importance of putting policies in place that allow individuals and businesses to thrive. He noted that Virginia, which only five years ago was among the top 10 most business-friendly states, has for three straight years seen more people move out than in.

“We need to have more opportunities for you to get good paying jobs after college,” he said.