Tower Theater ventures into the 18th century with 'The Rivals'

A theatrically heightened retelling of playwright Richard Brinsley Sheridan’s own courtship of his wife, the play follows a group of people on a visit to a health spa in Bath, England. Lydia Languish, a whimsical romantic, is obsessed with the idea of abandoning her wealth and eloping with a poor soldier so she can experience a life of poverty. Her suitor, Jack Absolute, therefore pretends to be poor so she will marry him. The plot takes the audience on a journey filled with mistaken identities and hidden intrigues as Miss Languish soon has other suitors, or “rivals,” applying for her hand.

Neal Brasher, director and assistant theater professor, said an 18th century comedy is something that has not been done on the Tower Theater stage before.

“Audiences who come to the play will enjoy not only the comedy, but they will also enjoy the costumes of the period,” Brasher said.

Brasher has directed 23 productions at Liberty, and said students worked hard to bring this particular time period to life.

“I am glad to see the students have a chance to challenge themselves with the language of the period and the comic timing required to execute a show such as this,” Brasher said. 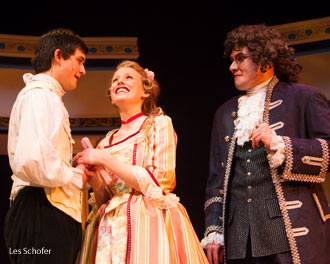 “The Rivals” has a cast of 12 students. Audiences may recognize Caleb Towns, Audrey Moore, and Lindsey Register, most recently seen in “Sanders Family Christmas.”

“This show has been one of the most unique and fun experiences for me here at Tower Theater.” Register said. “I have come to savor these words, and really relish the witty humor. I think our friends in the audience will be pleasantly surprised by the shenanigans they will encounter.”