Around Liberty University’s campus, the scene for Saturday’s first home football game of the season against Florida International University (FIU) at 1 p.m. may not resemble the usual Game Day experience, but Liberty’s Athletics and Student Activities departments have found creative ways to keep students, alumni, and other Flames fans engaged.

With seating capacity at Williams Stadium limited to 1,000 by state COVID-19 restrictions, the majority of residential students and many longtime season ticket holders won’t be able to attend the contest in person. There will be no Fan Fest activities for families as usual in the Indoor Football Practice Facility. However, Flames Nation will still be there in spirit, cheering the team on from wherever they may be while tuning into the game on ESPNU or LFSN Radio.

As many as 1,000 students will attend the first of five Football Watch Party events organized by Student Activities on home football game days. Students must pick up a wristband on Thursday from 2-6 p.m. or Friday from noon-3 p.m. on the Academic Lawn outside the Montview Student Union. The event takes place on the Commons Lawn, where students can view an LFSN broadcast of the game on a large screen starting at noon with a pre-game show. Pizza and other giveaways will be provided; concessions will also be available.

Coming off a fantastic season-opening victory at Western Kentucky, led by quarterback Malik Willis’ program-record 168 yards rushing and three touchdowns in his Liberty debut, the Flames will look to extend their five-game home winning streak when they meet the Panthers for the first time.

Both teams played in bowl games in 2019, with Liberty defeating Georgia Southern, 23-16, in the Cure Bowl in Orlando, Fla., and FIU losing to Arkansas State 34-26 in the Camellia Bowl in Montgomery, Ala.

Redshirt junior linebacker Aaron Pierre said the Flames adjusted quickly to competing in a less than full capacity stadium at Western Kentucky and will be ready to do the same in their home opener.

“This is a different year,” added Flames second-year Head Coach Hugh Freeze, who coached last season’s home opener from a hospital bed in a skybox after undergoing emergency back surgery. “It’s just a different time and different world. To sacrifice the things we’ve had to, to get to this point, is very rewarding, knowing that every week hinges on that same type of discipline, preparation, and accountability to take care of each other.”

He hopes the Flames play the way they have practiced this week, with renewed enthusiasm coming off an encouraging win on the road.

“We preach to our kids … that we create our own energy, just like we did last week, and just like practice, really,” Freeze said. “We practice in our stadium, so we won’t change anything about the preparation. It’s still our home field. It’s got to mean something to us. Hopefully, the leadership of our team will understand that … (and) they’ll get the message loud and clear.”

There will be fewer personnel and media on the sidelines. Following all CDC guidelines for masks and social distancing, the Liberty Cheerleading team will be stationed above the south endzone, exhorting and fanning the Flames from the stands throughout the contest.

The Spirit of the Mountain marching band, started in 1977 and now in its 21st season under the direction of Stephen Kerr, will occupy the entire East Side upper deck with 10 feet between each of the 250 members.

“Game Day is a big deal, and we are happy to be a part of it,” Kerr said. “It’s a lot of energy, a lot of excitement. There are a lot of things we do that make being a part of the Spirit of the Mountain unique. We have a mission spiritually, academically, and socially to lead our members in maturing as young men and women. The audience doesn’t see the 95 percent of the work that happened before game day. These kids work hard to entertain, and there are many pieces to the puzzle.”

On Monday, the band filmed its pre-game and halftime show, to the theme “Everlasting,” on the stadium field. Those segments will be aired on the videoboard and at the Watch Party on Saturday, when the band will perform the National Anthem live from the stands before kickoff and a variety of its 25 pieces, including the “Fan the Flames” fight song, after every Liberty score.

“When we had a run-through the other day, they sounded great in the upper deck,” said Robert Goodman, Liberty’s associate athletic director for sales and athletics promotions. “We were a little worried being spread out that the sound would be washed out, but it was 50 times louder than I thought it would be and you could hear it clearly from the (Hancock) Welcome Center to LaHaye (Recreation & Fitness Center).”

>>Visit the Flames’ Athletics website for complete Game Day Central information, including more ways to tune into the game remotely. 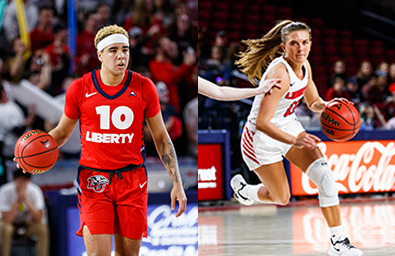 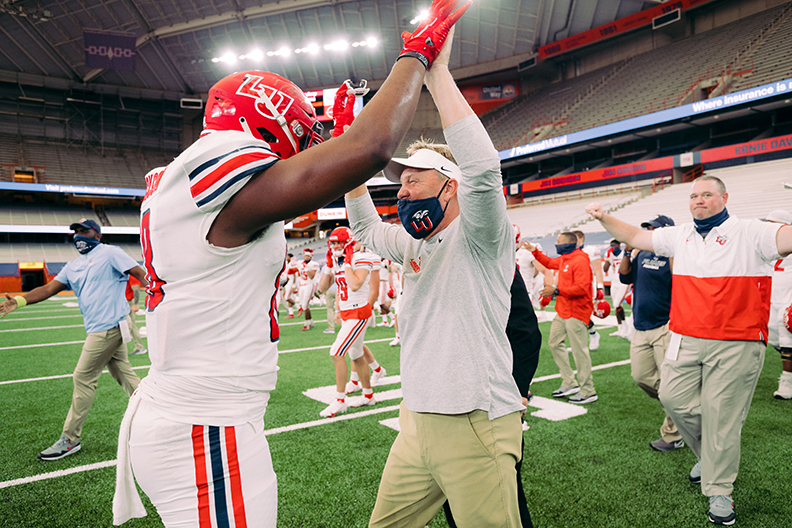