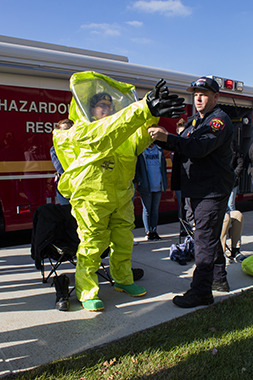 Members of the Lynchburg Fire Department, Virginia State Police, Virginia Department of Radiation Health, and the American Red Cross displayed their equipment and shared their expertise while students, divided into nine groups, switched between observational stations.

Each station exhibited unique apparatus pertinent to their respective operators. Members of the Hazardous Materials Unit, for example, showed students how to wear Hazmat suits, protective outfits designed to combat dangerous gases and particles in a radioactive environment.

“Liberty has been very supportive of this event,” said Dr. J. Thomas McClintock, a professor in Liberty’s Biology & Chemistry department and director of the forensic science program. “The main thing is just trying to get students to learn about these different skillsets that first responders have.”

“It’s a really novel opportunity for students,” added McClintock, who was named among the top 15 DNA analysts in the country in 2013 by ForensicColleges.com. “The purpose is really to look at all the different applications of forensic science in our world.”

A mock lab was stationed on the second floor of the Indoor Track and Field Complex, where “terrorists,” played by students, manufactured anthrax, a deadly bacterium most commonly distributed through animals or contaminated animal products, according to the Center for Disease Control and Prevention (CDC).

A distribution center, where “terrorists” sold their deadly toxins, was stationed adjacent to the mock lab.

Professionals also showed students how to establish and operate a decontamination line. 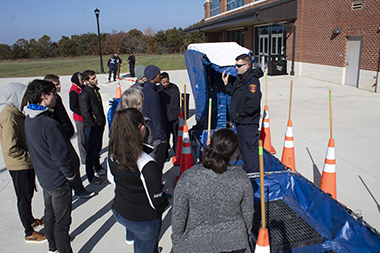 Nursing students learned valuable hands-on skills by diagnosing and monitoring the severity of their mock patients’ conditions, which ranged from anthrax and radiation to a genetically modified strain of influenza.

“It was cool to triage patients in this disaster community setting, because we don’t get to experience that in the classroom,” said Hannah Otowchits, a senior nursing student. “It’s hard to simulate a real catastrophe environment.”

Several “terrorists” wore concealed radiation buttons, which elicit small amounts of radioactivity, on their body to simulate having been contaminated. Nursing students used special equipment to identify the location, usually hidden in pockets or shoes.

“It’s really cool that we got this experience,” Otowchits said. “We wouldn’t normally get this. We usually are doing hospital settings, so this was cool for community-type nursing.”

In previous years, the civil support team from the National Guard, which specializes in weapons of mass destruction, participated in the simulation, but Saturday’s event conflicted with a prior engagement.

The simulation was a success according to Kevin Richards, a special agent with the Virginia state police and a counterterrorism agent. 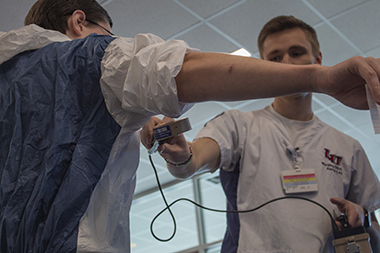 “For students who are passionate about this, these simulations give them a way to plug in,” Richards said. “A lot of these professionals will retire soon, and we have to backfill. These students are brilliant. They will do a really good job.”

Liberty’s first bioterrorism simulation was in the Vines Center, but recently, the Indoor Track has housed the mockup, partially due to construction of Liberty Arena near the Vines. McClintock hopes to move the simulation back to the Vines Center in the future.

“(The simulation) is just a great opportunity for students to work with experts in their field and receive training in that field in a friendly environment,” McClintock said. “They’d rather learn about the limitations during training versus during a real event.”