UPDATE: Student makes it to Top 10 on ‘American Idol’

Liberty University student Cade Foehner made it to the Top 10 on “American Idol” after his performance on Monday night. He made the cut early in the show and avoided having to prove himself at risk of elimination in the “danger zone” portion. Earlier in the month, Foehner impressed the judges on the show to advance to the Top 14.

Cade Foehner, who is earning his bachelor’s degree online through Liberty University, did not have any expectations when he first auditioned for ABC’s hit music competition series “American Idol.” Having grown up in Shelbyville, Texas, he has been a musician for as long he can remember, but Foehner said he is still trying to wrap his mind around his success on the show. 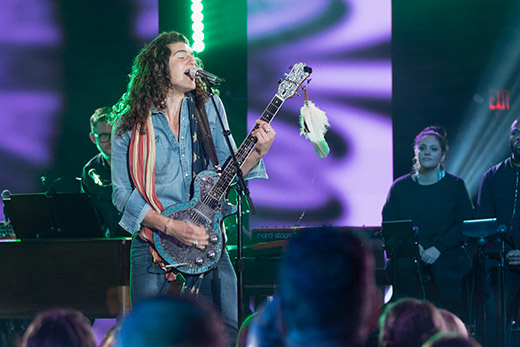 Last week, Foehner became one of the last 24 “American Idol” contestants remaining. In his most recent performances, he energized a live crowd with his rendition of Kaelo’s “No Good” and received a standing ovation from the judges for his solo performance of “Feel It Still” by Portugal. The Man.

When the judges told him soon after that he made the top 24, Foehner said that’s when he realized he has a real shot at making a deep run on the show. Current judge Lionel Richie, who Foehner grew up listening to, told Foehner after the two performances that he “had the stuff” to make it to the next level.

“When someone like Lionel Richie says that to you, you sort of feel like you’re dreaming and things don’t feel like they’re actually real,” Foehner said. “I just hope I don’t wake up; I want to keep on rolling.”

Along with his run on “American Idol,” the 21-year-old Foehner has been keeping up with his studies. Since the Fall 2016 semester, he has been enrolled online with Liberty as a biblical studies major, and he hopes to one day use the degree to lead his own church. For Foehner, the flexibility of Liberty’s online program has made it possible for him to continue his theological studies with the freedom to pursue his musical career.

“To me, Liberty online was an obvious choice for a school,” Foehner said. “A lot of the pastors I know around here have gone to Liberty, and I love being able to dive in-depth with Scripture. It doesn’t even feel like I’m going to class; the work I do is the stuff I want to do.”

Throughout his time on the show, Foehner admitted that getting more recognition and fame has made it more difficult than ever before to adhere to biblical teachings of humility. Understanding how so many have become swept up in fame and lost sight of who they really are, Foehner said he has been focusing on his relationship with God to stay grounded.

Looking forward, though, Foehner said he hopes the support of his fans and family will help him move on to the next level of “American Idol.” After giving it his all during his last performances, he said that he is still striving to “wow the judges” once again.

“When you come off a performance that went as well as my last one did, you’re kind of stuck wondering ‘How in the world am I going to top that?’” Foehner said. “You can’t top out this early, so it’s nerve-wracking because you want to give more, but you don’t know where to get it.”

Foehner said that as long as he has his “American Idol” platform, he plans to use it to help spread the Gospel.

“Other contestants on the show, when they found out I am studying biblical theology, they started coming up to me and sitting with me during breakfast and asking me different questions about it,” Foehner said. “Without my schooling at Liberty, I wouldn’t have the answers for them.”

Chat with a representative to find out more about Liberty’s online degrees.